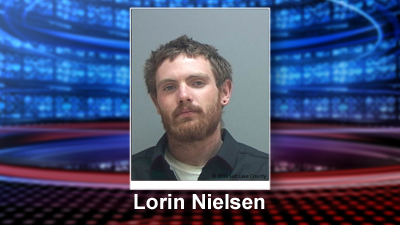 SOUTH JORDAN – Police responded to an alleged bank robbery Friday afternoon, and on Sunday they stated they had identified and arrested the man they believe carried out the crime.

In a press release from the South Jordan Police Department provided Sunday, police identified the suspect as 23-year-old Lorin Nielsen.

Detectives were able to track Nielsen to a hotel in South Salt Lake, where they took the man safely into custody. Nielsen was booked into the Salt Lake County Jail.

According to a statement of probable cause provided Sunday, Nielsen faces the following charges: aggravated robbery, possession of marijuana, no valid license, giving false information to law enforcement, operating a vehicle without proof of insurance and a charge relating to a controlled substance.

Police said Friday Nielsen had walked into a Zions Bank at 4753 West Daybreak Parkway at about 3:30 p.m. and presented the teller with a note demanding money. According to the statement of probable cause, Nielsen’s note included a bomb threat.

According to police provided, the teller complied with the demand for money and the man fled with about $1,200 in cash. The suspect did not display a weapon.

Anyone with information about the alleged crime is asked to contact South Jordan police at 801-840-4000.