PROVO -- A police dash camera that recorded the final moments of Utah County Sheriff's Sgt. Cory Wride was played in front of weeping relatives in court here, as a judge decided whether to order a 17-year-old girl to face trial as an adult in his murder.

Meagan Grunwald huddled with her attorneys but showed little emotion as the recording played out. On screen, the traffic stop outside Eagle Mountain was played. Wride walked up to the Toyota Tundra and spoke with Grunwald, who was driving.

Jose Angel Garcia-Jauregui was in the passenger seat.

The tape showed Wride also speaking with Garcia-Jauregui, then returning to his vehicle. Shortly after Wride received a computer alert that Garcia-Jauregui had a warrant for his arrest, the brake lights of the Tundra come on and the rear-window slide open. An arm holding a handgun appears and seven shots are fired.

Wride groaned on the recording as the truck speeds off. Prosecutors showed the court Wride's vehicle -- riddled with bullet holes, his body slumped in the seat.

Before the recording was played, many members of Wride's family walked out. Those who stayed were weeping.

In another dash camera recording played for the judge, Utah County Sheriff's deputy Greg Sherwood encountered the Tundra on I-15. He gives pursuit, then there's a "pop" and Sherwood stops.

The recording showed the Tundra make a U-turn and speed past Sherwood while he sits wounded. Sherwood calls out and says he's been hit, giving his location.

The shooting of the two officers led to a 110 mile-per-hour chase that ultimately ended near Nephi.

"The truck pulls up next to me and the guy leans out the window," testified trucker Alonso Van Tassel, who was caught up in the chase. "He looks at me and he shoots at my tractor again, fires two more shots. I mean, he was right there next to me."

More police dash camera recordings showed the chase. On one video, Grunwald and Garcia-Jauregui are seen running from their spiked pickup toward an overpass.

Juab County Sheriff's deputy Alan Taylor testified that he saw Garcia-Jauregui fire shots at officers, including himself. The two are then seen carjacking an SUV and the pursuit continued.

"He was pointing a gun at everybody and everything in that intersection," Taylor told the court.

A few miles down the road, the SUV is seen swerving toward a UHP cruiser. The SUV's tires were spiked and the vehicle is seen losing a tire, going into the median and hitting another car in oncoming traffic.

Gunshots are heard. Grunwald is seen on the recording laying down on I-15. Traffic is still moving on the freeway.

More gunshots were heard as officers run across the median. Garcia-Jauregui was ultimately shot by police. Taylor described him still being conscious as officers arrived.

"He said, 'Why don't you let me kiss my girlfriend with my last dying breath?'" Taylor testified. "I told him, 'That's not going to happen.'"

The recordings were forbidden from being broadcast in an order issued by Fourth District Court Judge Darold McDade.

In testimony Wednesday afternoon, prosecutors introduced evidence of Grunwald and Garcia-Jauregui's relationship. Prosecutors showed the judge pictures of them "cuddling," a picture of a ring on a girl's hand, and a note that read:

"In a dark time in your life, a Angel fell into your path with broken wings and a broken heart. You took him in and helped him heal. F---ing love you Babby girl."

Prosecutors said Garcia-Jauregui changed the tattoo on his neck from "Gabby" to "Babby." Defense attorneys stipulated "Babby" was the pet name for Grunwald.

But outside court, Grunwald's defense attorney suggested she may have been a hostage of Garcia-Jauregui.

"We have a 17-year-old girl, admittedly that had a close relationship that is now locked in a  truck with a lunatic, shooting everything and everywhere he can," Dean Zabriskie told reporters. "I would hope everyone can wait until she can recite her feelings about what happened."

Grunwald is facing murder, attempted murder, weapons and robbery charges for her role in the crime spree. 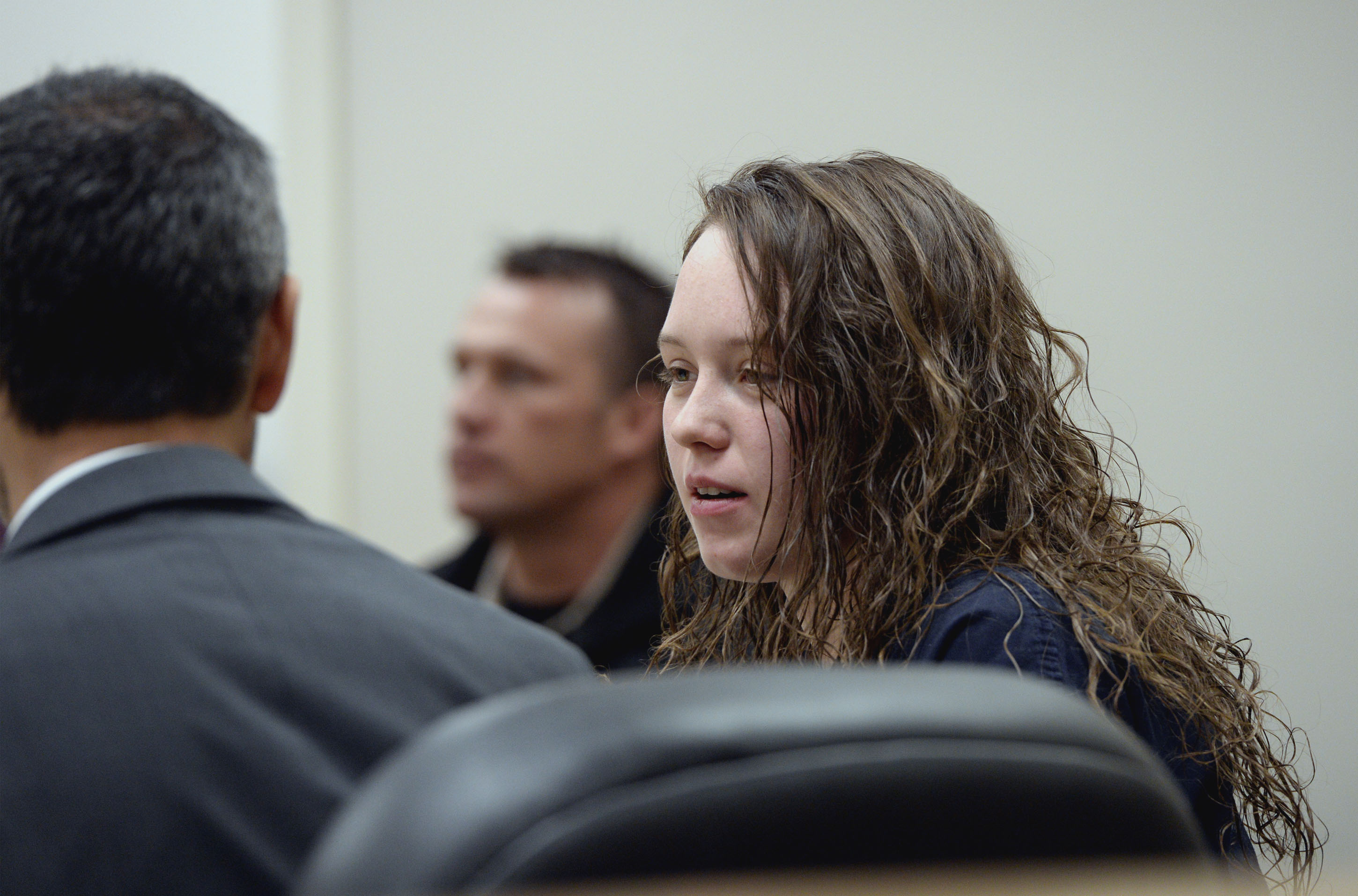