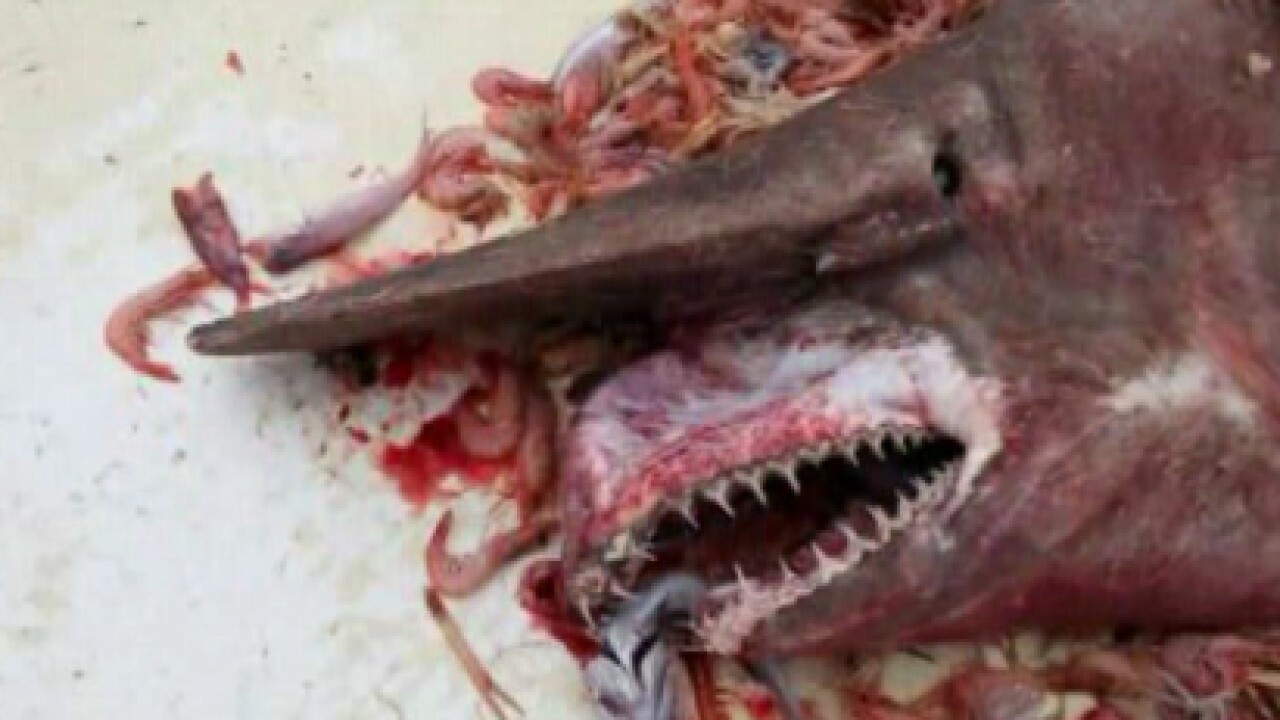 We're talking about a goblin shark -- only the second member of his species ever caught in the Gulf of Mexico, and the first since 2000, shark expert John Carlson said.

"Beauty is in the eye of the beholder," Carlson, a National Oceanic and Atmospheric Administration research biologist said. "Some would call them 'ugly.' I think, 'interesting.'"

Carl Moore, 63, of Townsend, Georgia, was the unlikely archeologist of this ichthyological wonder, which he estimates was 18 to 20 feet long. He caught it on April 19, about halfway through an 18-day fishing trip.

Carlson guesses it was closer to 15 feet, with the largest goblin shark ever measuring 18 feet.

Moore decided an exact appraisal wasn't in his best interest.

"I was going to take the tape measure, then he flashed around again. I said, 'Forget the measurement. That thing'll eat me up!'"

Moore has been shrimping the Atlantic and the Gulf for 50 years, with a short break for a stint in the Air Force, and he's "caught so much weird stuff: sawfish, Bahamian anglefish, loggerback turtles weighing 1,000 to 1,500 pounds." But when the goblin shark spilled out of his trawling net full of royal red shrimp, Moore felt "disbelief."

"First thing I told them boys was, 'Man, he's ugly! Looks prehistoric to me,'" Moore said.

Goblin sharks do resemble some prehistoric species, and Carlson said Moore made a "pretty important find." They're not seen anywhere all that often, though the coast of Japan boasts the shark's share of recorded sightings.

"We don't know a lot about deep water fauna," Carlson said. "We know little about (goblin sharks) -- how long they live, how fast they grow." One thing that's fairly certain: At their size, goblin sharks have few natural predators, according to Carlson.

The photographs Moore provided to NOAA will help expand that knowledge. Carlson said he and a colleague now are writing a paper on goblin sharks to submit to a scientific journal.

And Carlson can thank a 3-year-old boy for that. Moore just recently began carrying a camera with him on his shrimping expeditions. He wants to share pictures of what he does with his grandson Keaton, who turns 4 on Wednesday.

Moore released the shark after getting photographic evidence of his -- and just about anyone's -- greatest fish story ever.

"Anything that's alive we try to put back in the ocean," he said.