Less-traveled trails at Zion National Park are brought to spotlight

ZION NATIONAL PARK -- Three million visitors hike the trails of Zion National Park every year. While most hit up the Narrows or Angel’s Landing, other parts of the park go overlooked.

It’s on those trails, however, that hikers say they find the most unique experiences.

“If you figure that 84 percent of the park is wilderness,” said park spokesperson Aly Baltrus. “That means, literally, Zion Canyon and the visitor’s center area makes up only about 16 percent of the park. There is so much left to explore.”

One of the roads less traveled lays just beyond one the most popular spots. The West Rim Trail stretches from Zion Canyon to Lava Point by Kolob Reservoir. The two-mile hike to Scouts lookout can be particularly crowded.

Most of the traffic is headed to Angel’s Landing.

“There can be 20-30 people up there at a time,” Baltrus said. “Yet you can kind of go over the first knoll, and you can be alone for the most part.”

Little Siberia lies along just a few miles further along the trail. The north-facing valley is a stark contrast to the desert canyon, filled with evergreens, lush vegetation and after a mid-spring storm, snow.

“Here you’re a little bit more immersed and up close to the rock,” said hiker Sandy Eeds. “And the rock features, and the rock height, for you height lovers, it will be great.”

Hikers say the most impressive part of the West Rim Trail are the views, and there’s a little bit of everything, checkerboard formations and slot canyon washes.

Another unique feature, the whole thing is paved, just waiting for hikers. It was paved in the 1920s as a way to protect the sandstone from eroding, but it’s turned into a reward for hikers taking the road less traveled.

“We were talking about that on the way up,” said hiker Jourden Reinhart. “It’s really strange. But it’s convenient.”

The West Rim Trail is typically done as a multi-day hike from one end to the other, but also makes a good day hike. More information on this scenic trail can be found here: http://www.everytrail.com/guide/zion-west-rim-trail

Hidden Canyon is another less traveled trail. Tucked into the east side of Zion Canyon, it’s often passed by as hikers make their way to the very popular Observation Point. The area is described as a “hanging canyon.”

It has a slot canyon feel, but getting there is an adventure itself.

“There is a cable to hold onto, but you only have a drop off on one side,” Baltrus said. “It’s a beautiful trail and magnificent views.”

Hidden Canyon does require some scrambling over rocks to get in, but the payoff is some unique rock formations, including a small arch near the end.”

“There’s not as many people on this hike,” said hiker Karl Rasmussen. “Because it’s more challenging. I just held onto the chain and kept thinking, don’t look down.”

Hidden Canyon is considered strenuous, mostly for those steep inclines and narrow trails. But while hikers say that scares off a lot of people, it also means they’re the ones worth taking.

“I looked up on the rocks and I thought, ‘there’s no way.’ How can you do that without equipment,” said hiker Christine Leach. “Totally blew me away. So awesome.”

The trail is easy to find and marked. See detailed instructions and additional photos here: http://www.citrusmilo.com/zionguide/hiddencanyon.cfm 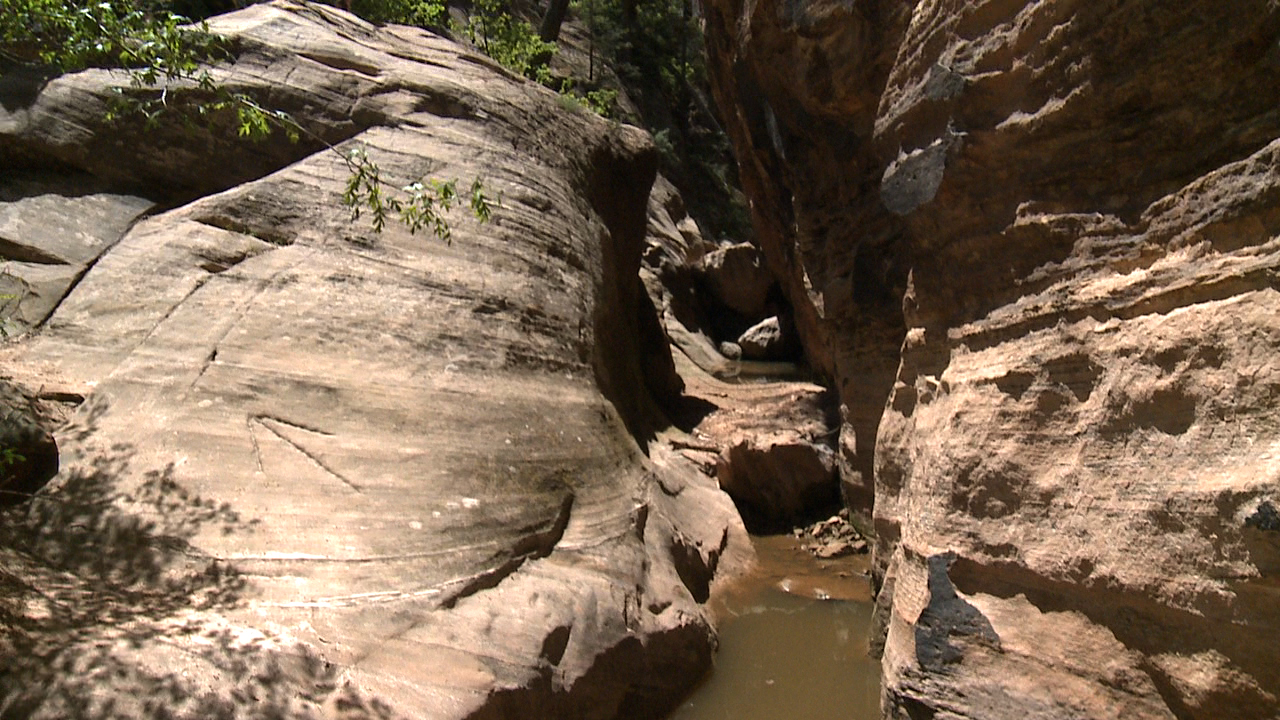 For a slightly easier stroll, but still without the crowds, consider a trip to Many Pools on the eastside of the park. The two and a half mile hike takes visitors to a massive sandstone mesa.

See a trail map and photos at: http://www.everytrail.com/guide/many-pools-zion-national-park

To really get off the grid, check out the Lower Pine Creek Trail. It's not on the official maps, but easy to find. From the first Highway 9 switchback, it’s a short .7-mile hike and ends at a 15-foot waterfall. You have to cross the river several times, so be prepared to get a little wet.

A map and photos can be found at: http://www.everytrail.com/guide/lower-pine-creek-waterfall

Gifford Peak is another trail few hikers experience. It’s hidden behind the large Watchman, G2 and Bridge Mountains. The desert area may have a lot of open area, but the peak offers some of the most spectacular views of East Zion. It’s a bit technical, and involves some scrambling up rocks, particularly near the top.