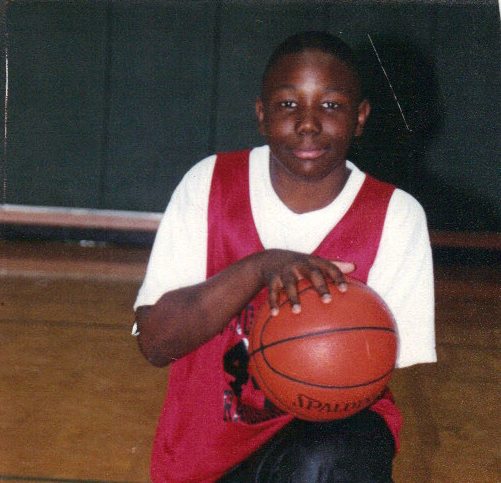 (CNN) — When Curtis Harmon III showed up in front of NFL scouting personnel in Baltimore last month, no one was sure what to expect. After all, how could a man with one arm catch a football?

Indeed, in his rundown for a Washington-Baltimore-area sports website, writer Barry Barnes said he was struck by the “passion, heart and determination” that Harmon exhibited at the regional combine, where lower-tier players not invited to the national scouting combine pay to be evaluated by the NFL.

Harmon, 25, was born with a birth defect that stopped the growth of his left arm from the elbow down. For his much of his life, the southside Washington native has dealt with stares from strangers, awkward questions about “what happened” and of course, the bullies.

But from a young age, there’s one thing Harmon wanted to become: a professional football player.

“When he was born the doctor told me not to treat him any different and that I would be surprised by what he would be able to achieve,” his mother, Roberta Scott, said in a phone interview from her home in Clinton, Maryland.

He’s been defying odds ever since.

At age 4, Harmon started playing the drums. Months later, he would learn to play the piano. By the time he was 6, Harmon decided he knew what he wanted to be when he grew up.

“I signed him up with the little league football in our area,” his mother said. “And once I did, he was like a little pro already. He’s always been really fast.”

Harmon put that speed on display at Gwynn Park High School in Prince George’s County, Maryland, where he started at fullback.

“It was more than football. It was about discipline,” Harmon said. “Ever since I can remember it was just me, my mom and my (older) brother. My dad was shot and killed when I was just a few months old, so my coaches were like my father figures. I learned about life from them.”

In 2007, during his senior year, Harmon ran for more than 800 yards. When he wasn’t scoring touchdowns, he played defense as a middle linebacker.

“I got a couple of looks from some Division I and II schools, but I decided that the best thing for me was to pursue playing football at a junior college,” he said.

Harmon took a year off from football before taking the field for Valley Forge Military Academy & College in Wayne, Pennsylvania, in 2009. He played two seasons there before transferring to Saddleback College, a community college in Mission Viejo, California, where he racked up 1,200 yards and eight touchdowns in two seasons.

“I’ve done so many things to make my success work. If that meant I had to transfer, then I did that,” he said.

In 2013, he moved back East, hoping to play for Winston-Salem State or East Carolina University, neither of which panned out. But rather than let his dream die, he went home and began training to be a professional.

“I probably would have never played football if I let what people think stop me. My dream was to be drafted in the NFL. My cousin Rashad Carmichael … plays for the (Philadelphia) Eagles. He encouraged me to go to the combine and show the scouts what I was about.”

In the runup to this month’s NFL draft, as the world watched a cavalcade of storylines — ranging from defensive phenom Jadeveon Clowney to the first openly gay player ever drafted, Michael Sam — Harmon’s uplifting story went largely unnoticed outside of a short film produced by the website worldstarhiphop.com.

But that wasn’t enough for the pro scouts. The NFL draft came and went, and Harmon went undrafted. That’s where Harmon thought his dream had ended.

“I kinda did expect that I would at least get a shot at being drafted because I felt like I gave it my all. I did better at the drills than people with two hands! Why not get a player who can motivate his team and play 100%?”

A few days later, his agent called with a new opportunity.

This weekend, Harmon will travel to an open tryout in Mooresville, North Carolina, a Charlotte suburb, to compete for one of the 46 roster spots on the Montreal Alouettes of the Canadian Football League.

If he’s selected, he’ll be the first player in CFL history to play with only one arm. But if he makes it, he won’t be alone in his journey.

Mark Speckman, the running backs coach for the Alouettes, was born without hands.

“God has a funny sense of humor. … There’s only so many one-handed fullbacks and no-hands running backs coaches in pro football,” Speckman said, laughing during a phone interview from Montreal.

While some may think that this was all a devised plan by the club, neither Harmon nor Speckman knew about the other until CNN spoke to the pair.

“That’s a game-changer right there,” Harmon told CNN after learning about the man who could be his position coach. “I’m anxious to get down there and just learn from him — not even football but everything in life. Someone who is just like me. I love that idea.”

Harmon’s road ahead will not be easy. Under CFL rules, a certain portion of a team’s players must be Canadian. Harmon knows competition will be tough.

“I’m trying to get a spot for how I play, not how I look,” he told CNN. “The fact of the matter is that what really inspires people is how I’m doing it. I love to inspire people and uplift people. Who wouldn’t want a better world? ‘Oh Curtis Harmon can go do that? Well I can go do this!’ That’s what I want people to take away from my story.”