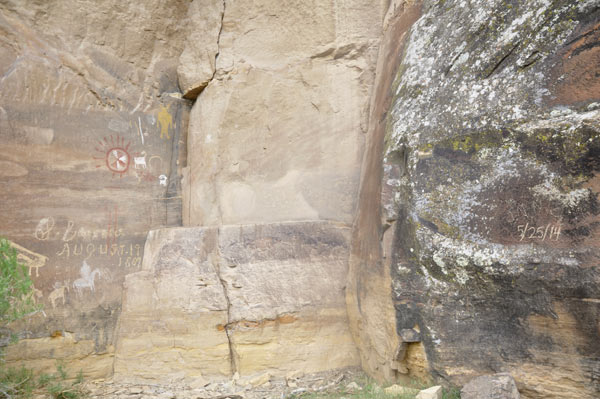 PRICE, Utah -- The Bureau of Land Management is investigating a popular rock art panel that was vandalized in 9 Mile Canyon over Memorial Day weekend.

Federal officials are trying to find the culprit while a Carbon County property owner claims a teenager confessed the crime to him.

The "pregnant buffalo" depicts a large bison with a bison fetus inside of it. It was carved between 900 and 1250 A.D., during the Fremont period, archeologists say.

"It's history written on the walls of the canyon by people that lived here 1,000 years ago," said Steve Hansen, President of the 9 Mile Canyon Coalition.

The historic significance is why archeologists are outraged that on Sunday someone carved their initials "JMN" and the date 5/25/14 next to it. BLM officials assessed the damage Tuesday and federal authorities have launched a criminal investigation.

Steve Hansen owns a ranch near the rock art panel. He didn't see the vandalism first hand but spotted a group of four people quickly leaving the site right after it happened. An archeologist who was also in the area reported their license plate to the BLM and Hansen said a few hours later a teenager got out of the vehicle at his ranch and approached, confessing to the vandalism.

"This young man was from West Valley. I don't know if he's ever been to the canyon or not," Hansen said. "He said he was visiting the area with his grandparents, he and his sister, and that he did that without the knowledge of his grandparents. I don't know why he did it. Why does anybody do that?"

There are other names carved next to the pregnant buffalo, including one dating back to 1867. In recent years, the canyon has been no stranger to defaced rock art. Archeologists hope authorities catch and prosecute the culprit.

"I see the public really stepping up and saying ‘this isn’t acceptable.’ But we have incidents that, the toppling of the hoodoos, the theft of the dinosaur tracks, there are idiots out there that don’t seem to get it. I think that’s why we need a law enforcement component in addition to public education," said Jerry Spangler, Executive Director with the Colorado Plateau Archaeological Alliance.

The BLM says no one's turned themselves in but they're investigating Hansen's claims.

If anyone's caught, the U.S. attorney will have to decide if charges are warranted, which typically result in fines or community service, if convicted.