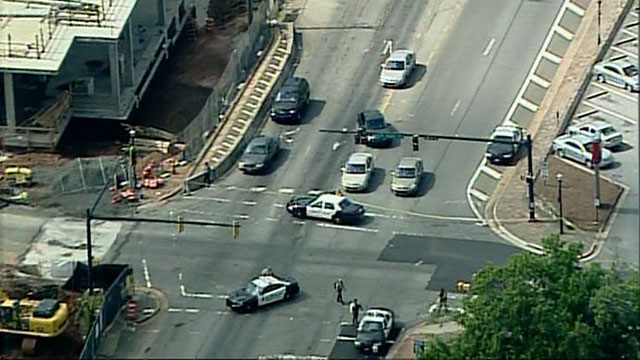 (CNN) — A man armed with explosives and an assault rifle might have entered a north Georgia courthouse Friday if not for a deputy who was wounded in the shootout with the gunman, Forsyth County Sheriff Duane Piper said.

Authorities killed Dennis Marx outside the courthouse, Piper said during a news conference, adding that the gunman planned to wreak more havoc once inside the building.

“Mr. Marx’s intention was to get in that front door and take hostages,” he said.

He said that Marx acted alone, and “there is no danger to the public.”

A witness’ video shows officers, guns drawn, closing in on a silver Nissan on a wide walkway in front of the courthouse. Orange smoke spews from a device near the vehicle.

A shot rings out, then another. Two more shots are fired before a 15-second torrent of gunshots. Dozens of officers then surround the vehicle, as three construction workers peek out from behind their backhoe at a construction site across the street.

Piper said the suspect began a “full frontal assault” on the building by driving up, throwing out “homemade spike strips” to delay any police response, and trying to run over a deputy, Piper said.

The deputy opened fire, and Marx returned fire through his windshield, hitting the deputy in the leg, the sheriff said. He also threw smoke bombs and gas grenades — perhaps using pepper gas — during the attack and had flex ties and water in his possession, according to the sheriff. Other explosive devices and “a lot of ammunition” were found on him and in his vehicle, he said.

Deputies, some from inside the courthouse, engaged in a roughly 90-second shootout with Marx, killing him, Piper said.

“The SWAT team, which happened to be close by on their way to another function, also pulled up about 30 seconds into this gunfire fight and they engaged Mr. Marx, and Mr. Marx is dead with multiple gunshot wounds,” the sheriff said.

The wounded deputy, who has not been identified, was shot while stopping Marx before he could get inside. The deputy is fine, the sheriff said.

The situation “was solved (with) that deputy’s actions,” Piper said of the 30-year veteran.

Marx was scheduled to attend a hearing at the Forsyth County Courthouse on Friday, where he was expected to enter a plea on a drug-related charge, a news release said.

“He came prepared to stay a while,” the sheriff said. “We don’t know who he was coming to the courthouse for, but with the flex ties and the restraining devices he had with him … we have to assume that he was there to occupy the courthouse.”

Officers have “contained” Marx’s home, and a preliminary investigation indicates Marx had not been there in about 10 days, “so we’re fairly certain at this point that there’s probably booby traps at the house or secondary devices at the house in an attempt to kill more officers,” the sheriff said.

After he heard “two or three pops,” he saw deputies fire on someone in front of the courthouse, Neal said.

Neal said he saw people tending to someone who appeared to be injured and police dragging someone else on the side of the courthouse.