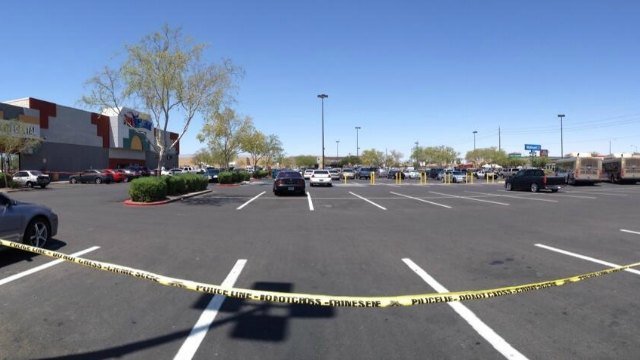 [EDITOR’S NOTE: According to a report from the Las Vegas Sun, neighbors of the couple responsible for gunning down two Las Vegas officers and one civilian said the pair had spent time on Cliven Bundy’s ranch during a recent standoff that occurred after officials began rounding up Bundy’s cattle.]

(CNN) — Police scouring the scenes where a couple shouting “revolution” gunned down two police officers and a civilian before killing themselves have found a possible “manifesto” among their belongings, a law enforcement official told CNN Monday.

The official didn’t disclose what’s in the writings found at one of the scenes, and authorities have yet to publicly discuss a motive for Sunday’s shootings at a Las Vegas pizza restaurant and outside a Walmart store.

But a police source told CNN Sunday that the couple held extremist views toward law enforcement.

In addition to the writings, investigators also found flags or insignias with markings on them and two backpacks at the scene. It’s not known what, if anything, was found in the backpacks, the source said.

Investigators searched an apartment believed to be where the couple lived late Sunday night. They also are going through the couple’s social media postings, the official said.

While authorities have yet to identify them, a woman who says she lived near them told CNN affiliate KTNV that the married couple liked to dress up as the villainous Batman characters Joker and Harley Quinn.

The neighbor, Krista Koch, told the station the man also sometimes dressed as Slenderman, a fictional horror character that recently surfaced in the stabbing of a 12-year-old girl in Wisconsin.

Koch also told the station the couple had told her they were going to carry out an attack, but she thought they were “crazy,” so she dismissed what they said.

Witnesses told police the shooters said, “This is a revolution” during their attack.

They then ran across a parking lot to the Walmart, where they shot a woman before retreating to the back of the store, where the woman fatally shot her husband before killing herself.

“This was a senseless and cruel act killing three innocent people,” Las Vegas Mayor Carolyn Goodman said. “Two who dedicated their lives to protecting all of us in our community and one who was innocently going about her daily life.”

The pair began their attack about 11:20 a.m. Sunday, when they opened fire inside the restaurant where Beck, 41, and Soldo, 31, were having lunch.

“I just sat down to have lunch. The officers were sitting in front of me, at the table right next to me, and this man came in out of nowhere,” a dazed Sheree Burns told KTNV.

“I thought he was going to get a drink, the way he walked up and walked past them. And then he turned around, pulled a gun on his right and shot the bald officer in front of me.”

“What precipitated this event, we do not know,” he said. “My officers were simply having lunch.”

The suspects took the officers’ guns and ammunition, Assistant Sheriff Kevin MacMahill told reporters. They “made a statement — something to the effect of, ‘This is a revolution.’ ”

‘That man was crazy’

As they walked out, they passed Alvaro Lopez.

“They had a backpack, and I saw a gun in their hand,” Lopez told CNN affiliate KLAS. “He just told me to tell the cops that it was a revolution and that he’d just killed two cops inside CiCi’s.”

The pair ran to the Walmart and killed shopper at at the store’s entrance, authorities said. Although a police representative had previously identified that victim as a female, a spokeswoman for the Clark County coroner’s office identified the dead person Monday as Joseph Wilcox.

Shoppers rushed toward the exit.

Pauline Pacheco saw the armed man and grabbed her father.

“We saw when the man was walking,” she told KLAS. “He was shouting, yelling bad words, and suddenly he had a gun.

Officers converged and exchanged fire with the couple, who ended the brief exchange in what MacMahill referred to as a “suicide pact.”

‘Emptiness in our heart’

Beck and Soldo were both married with children: Beck left behind a wife and six children; Soldo, a wife and a baby.

Meanwhile, Las Vegas police will be doubling up in patrol cars for at least the next few days as officers mourn the loss of two colleagues.