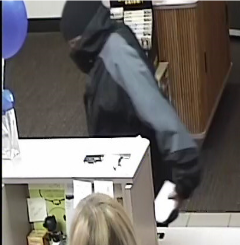 Authorities have not said if the incidents are related.

The first robbery was reported in Centerville at a Zions Bank, 440 W. Parrish Lane at approximately 2:45 p.m.

According to a press release from Centerville Policea person entered the bank and appraoched the teller and handed her a note demanding all the cash in the till. The teller complied and the suspect left on foot going west into the parking lot.

No weapon was displayed in the bank but a customer in the drive-thru reported seeing the suspect carrying a balck handgun, according to the release.

According to bank employees the suspect was a woman dressed as a man wearing a fake mustache. She is described as being 5 feet 6 inches tall and around 140 pounds.

The suspect was last seen wearing a white hooded sweatshirt  with “METAL MULISHA” printed on the back, dark sunglasses and a ball cap.

Another robbery was called in just before 3 p.m. from the U.S. Bank in Taylorsville on Redwood Rd. near 4100 S. in the Meadowbrook Plaza Shopping Center.

Officials said the suspect was an armed Caucasian man in his 40s with a muscular build.

Salt Lake County authorities said the suspect is about 5 feet and 8 inches tall.

He was last seen wearing a black beanie, black jacket and dark jeans.

Authorities said the suspect ran from the scene.