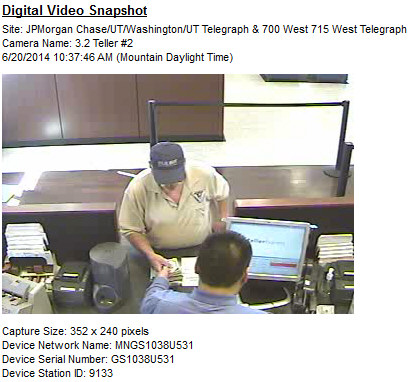 WASHINGTON CITY, Utah – Police are searching for a suspect who robbed a bank in Washington City Friday morning, and on Monday officials provided images of the suspect captured by a surveillance camera.

The suspect entered a Chase Bank at 715 W. Telegraph St. around 10:30 a.m., approached a teller and demanded money.

According to a press release from the Washington City Police Department, the suspect left after receiving money. No weapons were displayed during the robbery.

The suspect is described as a middle-aged Caucasian male who stands about 5-feet 10-inches tall and is heavy set. Witnesses said the man had an unshaven or “scruffy” face at the time of the robbery. The man was last seen wearing a blue baseball cap, a tan shirt and khaki shorts. Witnesses could not see hair protruding from the man’s cap. The man is pictured in the gallery above.

Police also provided an updated description of a possible suspect vehicle in Monday’s press release: “‘white 80’s Jeep, possibly a Wrangler, with Nevada license plates’.  It was further described as having a ‘lift kit’ and silver running boards.  It had a soft top with tape covering the back of it.”

Police are working with the FBI to investigate the incident. Anyone with information about the robbery or the suspect is asked to contact Washington City Police Department dispatch at 435-634-5730.