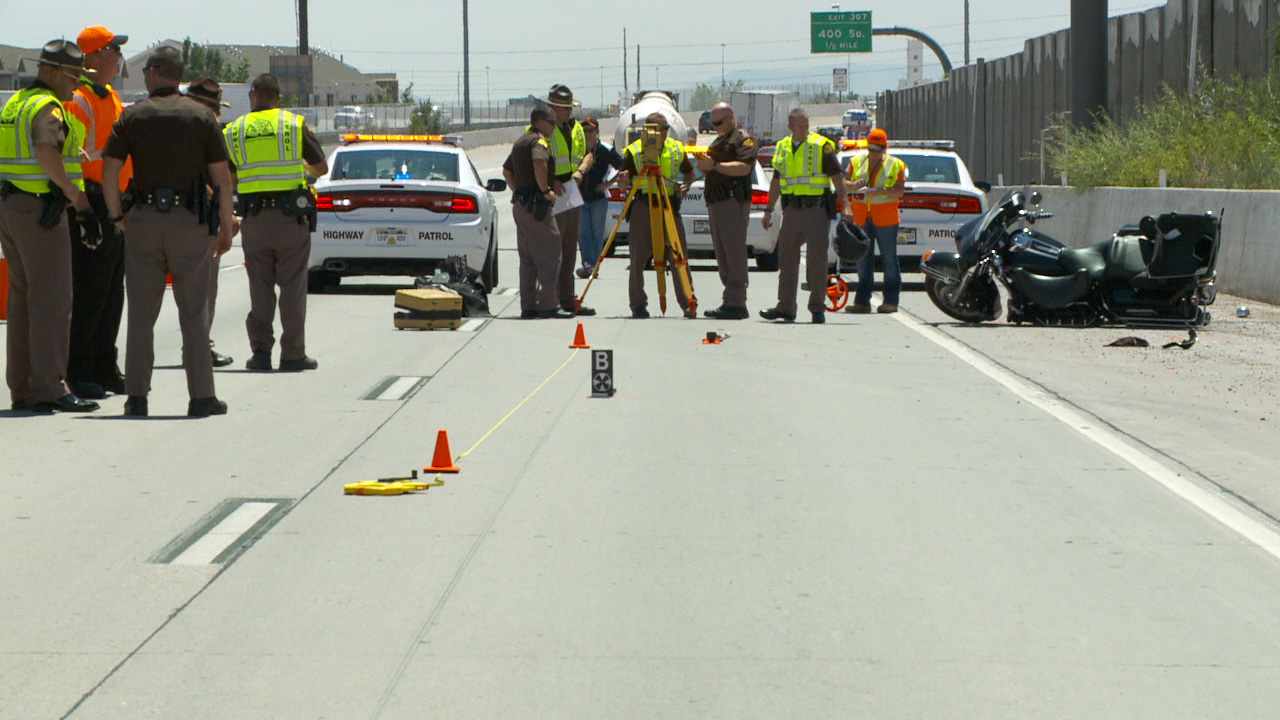 SALT LAKE CITY – A man was critically injured in a motorcycle crash Wednesday afternoon after he struck the rear of a vehicle, lost his helmet as he hit a wall and then traveled about 25 feet.

The accident occurred Wednesday on southbound I-15 near 500 North in Salt Lake City.

Robbins said initial reports indicate a 47-year-old man was traveling too fast and struck a vehicle that was stopped due to traffic. Robbins said UHP officials were in the area for other crashes that occurred earlier, which contributed to the traffic.

Robbins said the motorcyclist was moving into traffic too quickly and was not able to stop in time.

“We had a witness say that they saw the motorcycle starting to swerve back and forth, the bike then rear-ended a vehicle that was here, waiting in line,” Robbins said. “That motorcycle then glanced off the vehicle, hit the wall; witnesses said when he hit the wall his helmet popped off. He went down the wall another maybe 25, 30 feet, and then landed on his head.”

There were no other injuries reported in connection with this crash.

Robbins said the crash is under investigation, but “it’s looking like” the motorcyclist was at fault for the crash. He said a good rule of thumb is for drivers to be looking 10 to 12 seconds ahead so they can prepare to stop or turn or whatever else they may need to do.

“We are required, by law, to maintain control of our vehicles as we’re coming into traffic like that,” he said. “Whatever the case may be: You gotta be able to stop safely.”

Robbins said they expect heavy traffic for the Fourth of July weekend, and he said they urge people to be careful as they travel for activities.

“We want people to be able to have fun, and to go do these things: but just be careful,” he said. “…Be aware that there a lot of people out there that are all doing the same things… again, watch 12 seconds ahead, be responsible for what you’re doing, and we just want you to be careful… it can happen anytime.”

Robbins said the crash comes during what officials call the 100 Deadliest Days, which is the period between Memorial Day weekend and Labor Day weekend. Officials said they generally see an increase in the number of fatal accidents on Utah roads during those days. Officials said in June that early numbers indicated an increase in fatalities on Utah roads in 2014 compared to last year.