WOODS CROSS, Utah -- A garage door company is a total loss after a massive fire erupted in an industrial park in Woods Cross Friday afternoon.

Flames ignited just before 5 p.m. at 1560 West and 2600 South; Officials captured footage of the flames, see the video above.

Officials initially reported there were two businesses in the structure and that both had been destroyed, but in a follow-up press release officials stated only one business, Overhead Door Company, was involved. Two homes in the area and six vehicles sustained heat damage. The damage is estimated at about $1 million, but fire officials stated they expected that number to increase as the full extent of the damage is determined.

By the time firefighters arrived, the roof had collapsed with plumes of thick, black smoke billowing into the air.

"Conditions were too dangerous to put firefighters in there," said Chief Jeff Bassett of South Davis Metro Fire Department.

Roughly 50 firefighters went on the defense, surrounding the building and using aerial cranes to prevent flames from spreading to homes right next to the business. One firefighter was injured; he suffered a laceration to the head that required two staples to close. The man was treated and released back to work.

Still, the heat was so intense, it warped the vinyl on Toua Strong's home.

"It came to the point where I kind of thought it could be my house or my neighbor’s house, it was kind of heart-wrenching, you just don't want to lose any property or have anyone hurt," Strong said.

Officials stated in Saturday's press release that workers were using a cutting torch on large garage door springs when they heard a noise and observed the torch had caught fire around the acetylene bottle's valve. The fire spread to large wooden spools that had rubber on them, and these items fueled the fire, which grew to engulf the roof. A natural gas line running along the length of the roof came apart and sent gas flowing into the area, which made the fire grow larger.

At one point, the smoke was so intense it shutdown Skypark Airport in Woods Cross for about an hour.

"We restricted the flight area because we had so much smoke,” Basset said. “We didn't want to have any concern with the planes in the smoke, that has since been lifted.”

Officials stated it was not clear why the bottle caught fire, and they said the incident remains under investigation. 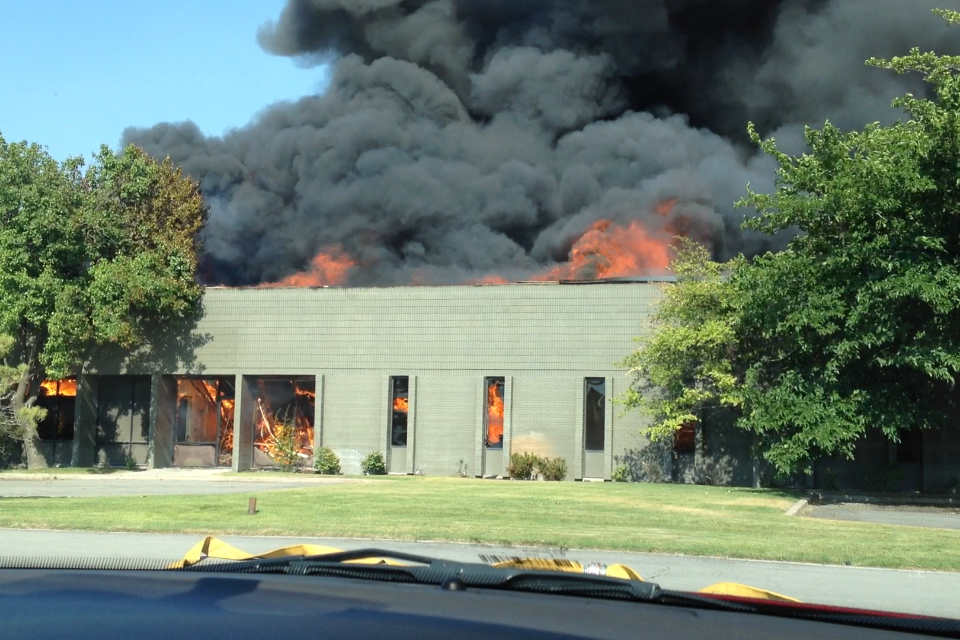