The Carbon County Sheriff’s office said the flooding damage totals are approaching $2 million and that total could rise.

Approximately 3/4 of an inch of rain fell within 20 minutes, according to officials.

While the area is known for flash floods, the water came on so hard and fast that nobody had time to prepare.

"I woke up this morning after the thunder and lightning and my feet hit the floor and there was a couple inches of mud in the house but the roof didn't leak so I didn't know I was wet until I got up," said Tony Archibald.

Since many of the homeowners don’t have flood insurance, Carbon County Emergency officials say they’re seeking help from FEMA.

"I can tell you that I've lived around this county for most of my life and I've never seen that type of a flood," said County Commissioner John Jones. "We're looking to prevent that in the future, we're taking notes, GPS where water came through, so we can do a good job of looking at this when we are done,"

Authorities said about 250-300 sandbags are available at the Carbon County Road Department at 2660 E. Airport.

Code Red is a service that notifies community members of any emergency situations.

Many members of the community have volunteered their time and equipment to help with the cleanup effort, such as the local Boy Scouts who spent time at Spring Glen Park.

"We're a small mining town, not many people here, so all the help we can get we need it," said Nathan Hyer.

Heavy rains hit the area at about 6 p.m. Monday and then again at 10 p.m. causing the flooding. 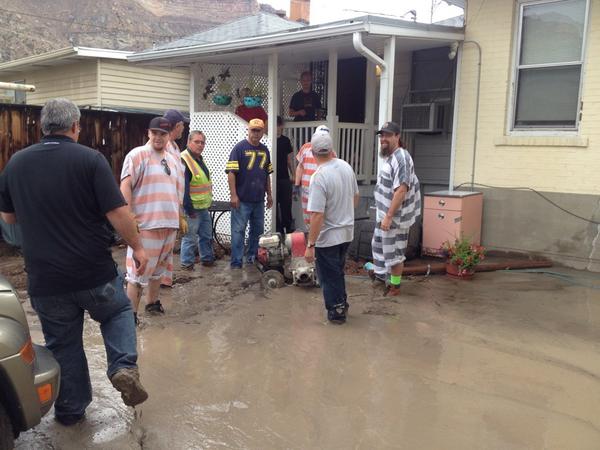