Robin Williams apparently hanged himself with a belt, officials say 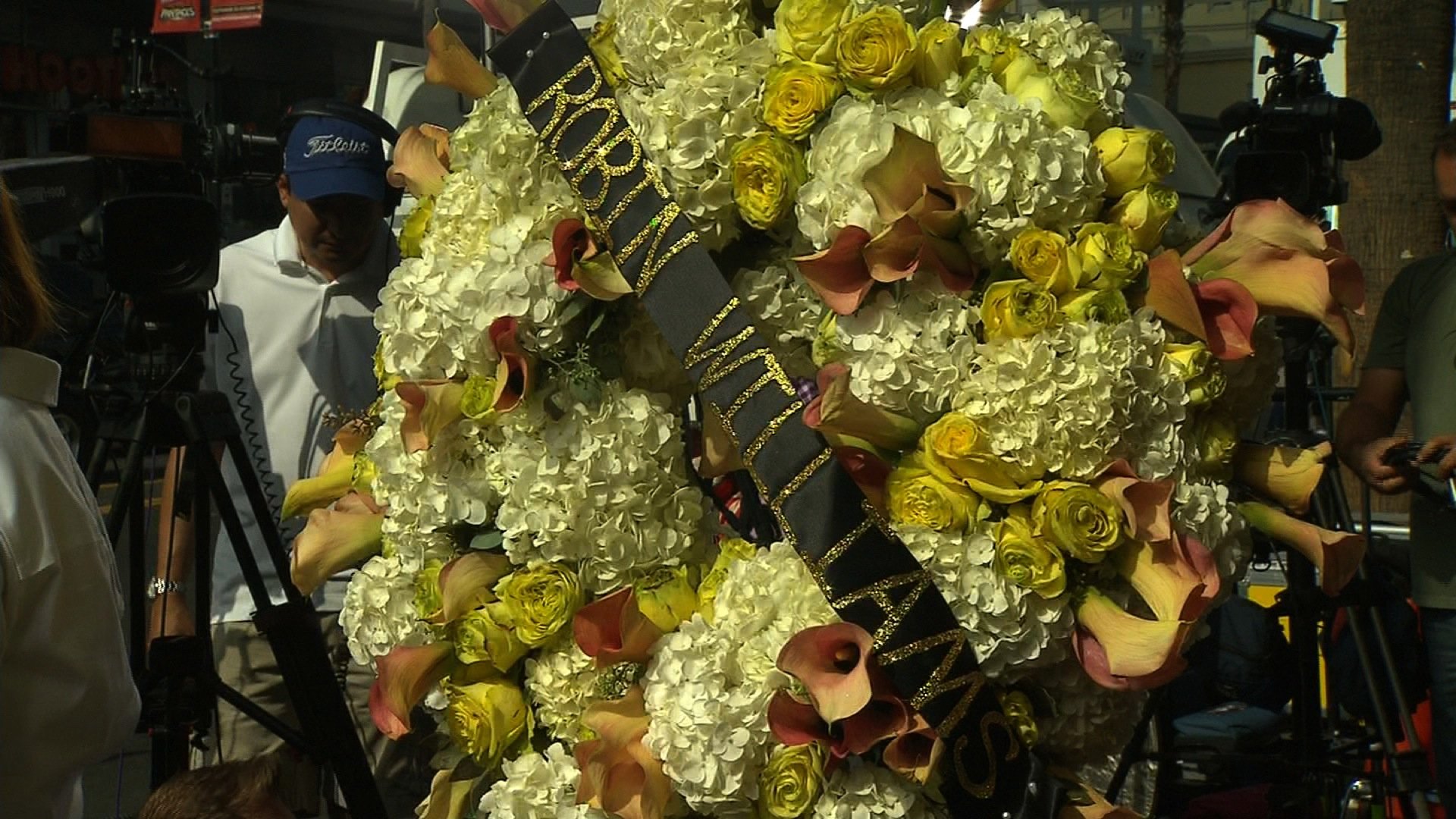 By Josh Levs and Alan Duke

(CNN) — The tributes to Robin Williams flow from around the world as stunned friends and family search for answers about why the comic legend would take his own life.

Investigators believe Williams, 63, used a belt to hang himself from a bedroom door sometime between late Sunday and when his personal assistant found him just before noon Monday, according to Marin County Assistant Deputy Chief Coroner Lt. Keith Boyd.

The coroner’s investigation “revealed he had been seeking treatment for depression,” Boyd told reporters.

“He has been battling severe depression of late,” his media representative, Mara Buxbaum, told CNN on Monday. “This is a tragic and sudden loss.”

The autopsy completed Tuesday morning showed “no indication of a struggle or physical altercation,” which was consistent with the death being a suicide, Boyd said.

A personal assistant found Williams “slightly suspended in a seated position” with a belt around his neck, he said.

Williams’ left wrist had cuts when he was found dead in a bedroom at his home, Boyd said. A pocket knife was found near his body, and a red material consistent with dried blood was found on the knife, Boyd said. He said tests will be conducted to determine whether the substance is blood.

Williams was last seen alive at about 10:30 p.m. Sunday, by his wife, when she went to bed, Boyd said. He apparently went into a bedroom at an unknown time after that, and his wife left the home at about 10:30 a.m. Monday, believing him to be asleep.

Williams’ personal assistant, concerned because he wasn’t responding to knocks on his door, entered the room and found him dead at about 11:45 a.m., Boyd said.

The actor made at least two trips to rehab for drug treatment, including a visit this summer, and he underwent heart surgery in 2009.

“I lost my husband and my best friend, while the world lost one of its most beloved artists and beautiful human beings. I am utterly heartbroken,” Schneider said.

“As he is remembered, it is our hope the focus will not be on Robin’s death, but on the countless moments of joy and laughter he gave to millions.”

“Robin Williams was an airman, a doctor, a genie, a nanny, a president, a professor, a bangarang Peter Pan, and everything in between,” President Barack Obama said in a statement. “But he was one of a kind. He arrived in our lives as an alien — but he ended up touching every element of the human spirit. He made us laugh. He made us cry. He gave his immeasurable talent freely and generously to those who needed it most — from our troops stationed abroad to the marginalized on our own streets.”

Williams on laughter in Heaven

Once on the TV program “Inside the Actors Studio,” Robin Williams was asked, “If Heaven exists, what would you like to hear God say when you arrive at the pearly gates?”

After a joke about a concert including Mozart and Elvis, he added, “to know that there’s laughter.”

On Tuesday, the morning after Williams’ death shocked the entertainment industry and his fans around the world, someone who knew him well described the man behind the legend.

“There had to be two people in the room” with him, his friend Bob Zmuda told CNN’s “New Day.” “Then you were an audience, and then he came alive.”

But one-on-one, Zmuda said, Williams “had no social skills. He couldn’t handle it… I knew this man for 35 years and yet it was like I was in an elevator with a stranger.”

Zmuda, a comedy writer, created Comic Relief, a program that raised funds for those in need through comedy. Williams hosted it, along with Billy Crystal and Whoopi Goldberg.

“He was an amazingly kind and generous person, and it’s got to be a terrible time for his family,” comedian Andy Richter said Monday night on “Conan.”

“He’s truly one of the all-time greats,” said actor Will Arnett, who was a guest on the program. “He was even better as a person. He was even more fantastic — just the loveliest, sweetest, one-of-a kindest guys that I have ever worked with.” Arnett described Williams as “a soft, warm, emotionally sweet guy.”

Sarah Michelle Gellar played Williams’ daughter in the CBS comedy “The Crazy Ones,” which was recently canceled after one season. She told People Magazine that “to everyone he worked with, he was the best boss anyone had ever known,” and both an inspiration and father figure to her. “And to his family, I thank them for letting us know him and seeing the joy they brought him.”

In character, Williams warned against suicide

“Riffing with Robin Williams was extremely invigorating — and extremely exhausting,” comic Gilbert Gottfried wrote in a column for CNN.com. “I knew I had to be on my toes every second. And when we would actually connect onstage, it was electric for me.” Williams was “generous to his fellow stand-up comedians,” he said.

“I’ve known people who have committed suicide, and my shock always reveals how little I knew about them,” Gottfried wrote.

In the 2009 film “World’s Greatest Dad,” Williams played a man named Lance Clayton — and delivered a line now making the rounds online: “If you’re that depressed, reach out to someone. And remember: Suicide is a permanent solution to temporary problems.”

Marin County deputies responded to an emergency call from Williams’ home in unincorporated Tiburon, California, at 11:55 a.m. Monday, reporting “a male adult had been located unconscious and not breathing,” a news release from the sheriff said. Williams was pronounced dead at 12:02 p.m.

From Julliard to ‘Happy Days’

Born in Chicago on July 21, 1951, Williams studied theater at Juilliard School before taking his stand-up act to nightclubs. He was cast as Mork, an alien visitor to Earth, for a 1978 episode of television’s “Happy Days.”

“Happy Days” star Henry Winkler said he “realized I was in the presence of greatness” at Williams’ first rehearsal as Mork.

“I just realized my only job is to keep a straight face,” said Winkler, who played “The Fonz.” “And it was impossible. Because no matter what you said to him, no matter what line you gave to him, he took it in, processed it, and then it flew out of his mouth, never the same way twice. And it was incredibly funny every time.”

He proved his dramatic acting skills in “Good Will Hunting,” a 1997 film that earned him a best supporting actor Oscar.

His memorable movies over the past three decades include “Good Morning, Vietnam,” “Dead Poets Society,” “Mrs. Doubtfire” and “The Birdcage.”

Williams credited the influence of Jonathan Winters’ comic irreverence and quirky characters as a great influence on his comedy. The connection between the two was completed when Winters was cast as Williams’ son on “Mork & Mindy.”

When Winters died in 2013, Williams said he was “my idol, then he was my mentor and amazing friend.” He tweeted that Winters was his “Comedy Buddha.”

Williams and his “Mork & Mindy” co-star Pam Dawber reunited on TV earlier this year on an episode of the CBS comedy “The Crazy Ones,” which was later canceled.

Williams’ fans can look forward to four more movie appearances coming to theaters, including another installment in the “Night at the Museum” franchise.

Dawber summed up the feelings of many in a simple statement: “I am completely and totally devastated. What more can be said?”