UTAH COUNTY, Utah - Officials said two teens who were hit by a car while riding on an all-terrain vehicle near Eagle Mountain were not wearing helmets and had pulled the vehicle onto the roadway without looking before the crash occurred.

Authorities said one 15-year-old girl was flown to the hospital and the other was rushed to a hospital in an ambulance; both girls are in critical condition but are expected to recover.

Trooper Matt Miller of the Utah Highway Patrol said the two teens on the ATV drove onto SR-73 in Utah County near MP 17 by 5 Mile Pass when they were hit by a PT Cruiser.

"They were going to cross the road here, follow their friends across the road," he said. "They didn’t look before they entered the roadway, and they were struck by a westbound PT Cruiser.”

The girl driving the ATV was sent over the top of the car and the passenger onto the shoulder of the road.

“On impact, one of the girls was thrown up and over the cruiser, landed on the roadway behind it," Miller said. "The other was thrown forward onto the right shoulder.”

The occupants of the PT Cruiser were not injured, and officials said the driver was able to slow down before the impact.

“The driver was able to dump a lot of speed before impact," Miller said. "He kind of recognized the situation unfolding, was able to brake, and so the impact speed wasn’t the full speed limit speed. It’s a 65 mile per hour speed zone out here."

And Miller said that driver's reactions may have saved lives.

“I think if the driver hadn’t been able to slow like he did, I think we’d be dealing with a couple of fatalities here," he said. “The girls were completely unprotected, you can imagine getting hit from the side on a 4-wheeler with no protective gear at all by a car going 65 miles per hour, that would have been catastrophic.”

Officials said the incident is a reminder of the importance of safety gear.

"They should all have helmets on, especially 15-year-olds, should have helmets on," Miller said. "Any protective gear you can use, whether you’re on an ATV or in your own vehicle, it should be used. That’s why the Highway Patrol always says, 'wear your seatbelt, a helmet on a motorcycle,' and a further extension of that would be wear your helmets out here on ATVs.” 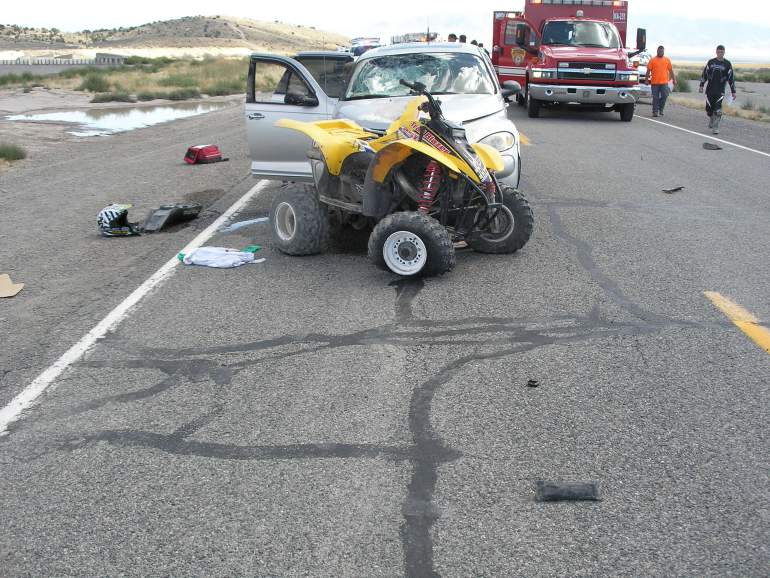