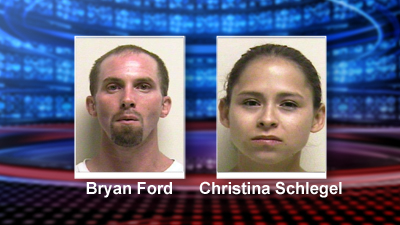 OREM, Utah – An investigation into a jewelry theft took an interesting turn as a woman deployed an unusual tactic in an attempt to avoid detection, but an X-ray revealed the missing item inside the woman’s stomach.

According to a press release from the Department of Public Safety in Orem, police were called to a theft at a Zales located at University Mall on Friday around 7:36 p.m.

Police stated a suspect looking at a ring valued at several thousand dollars fled with the ring and got into car with a female driver. The car was described as a white Pontiac G6 with pink sticky notes on the license plate, and about a half an hour after officers responded, police located and stopped a vehicle matching that description.

Bryan Ford and Christina Schlegel were in the vehicle when police stopped it at the Ventana Apartments, 1386 S. 400 West in Orem. A story employee positively identified Ford as the suspect from the theft, and both occupants of the vehicle were brought to the police department.

Police were not able to find the stolen ring, but, according to the press release, “after being sent on several wild goose chases, we found out that Christina had swallowed the ring in an attempt to hide it when they were pulled over by police.”

The woman was taken to a local hospital, where an X-ray was taken to confirm the ring was inside of her. Both suspects have been booked into the Utah County Jail on felony theft charges. Police did not specify whether or not the ring had been recovered.