Her daughter, Melissa Rivers, announced the news from New York where her mother was on life support for a week after suffering cardiac arrest during a medical procedure.

“She passed peacefully at 1:17 p.m. surrounded by family and close friends,” Melissa Rivers said in a written statement.

Rivers had been on life support at Manhattan’s Mount Sinai hospital, where she was taken after she stopped breathing at the Yorkville Endoscopy clinic last Thursday.

Rivers was undergoing an apparently minor elective procedure at the clinic when she suffered cardiac and respiratory arrest, according to the New York Fire Department.

The outpatient clinic is now being investigated by the New York State Department of Health, spokesman James O’Hara said.

CNN reported the cause of death has not been confirmed at this time.

Melissa released this statement to CNN: 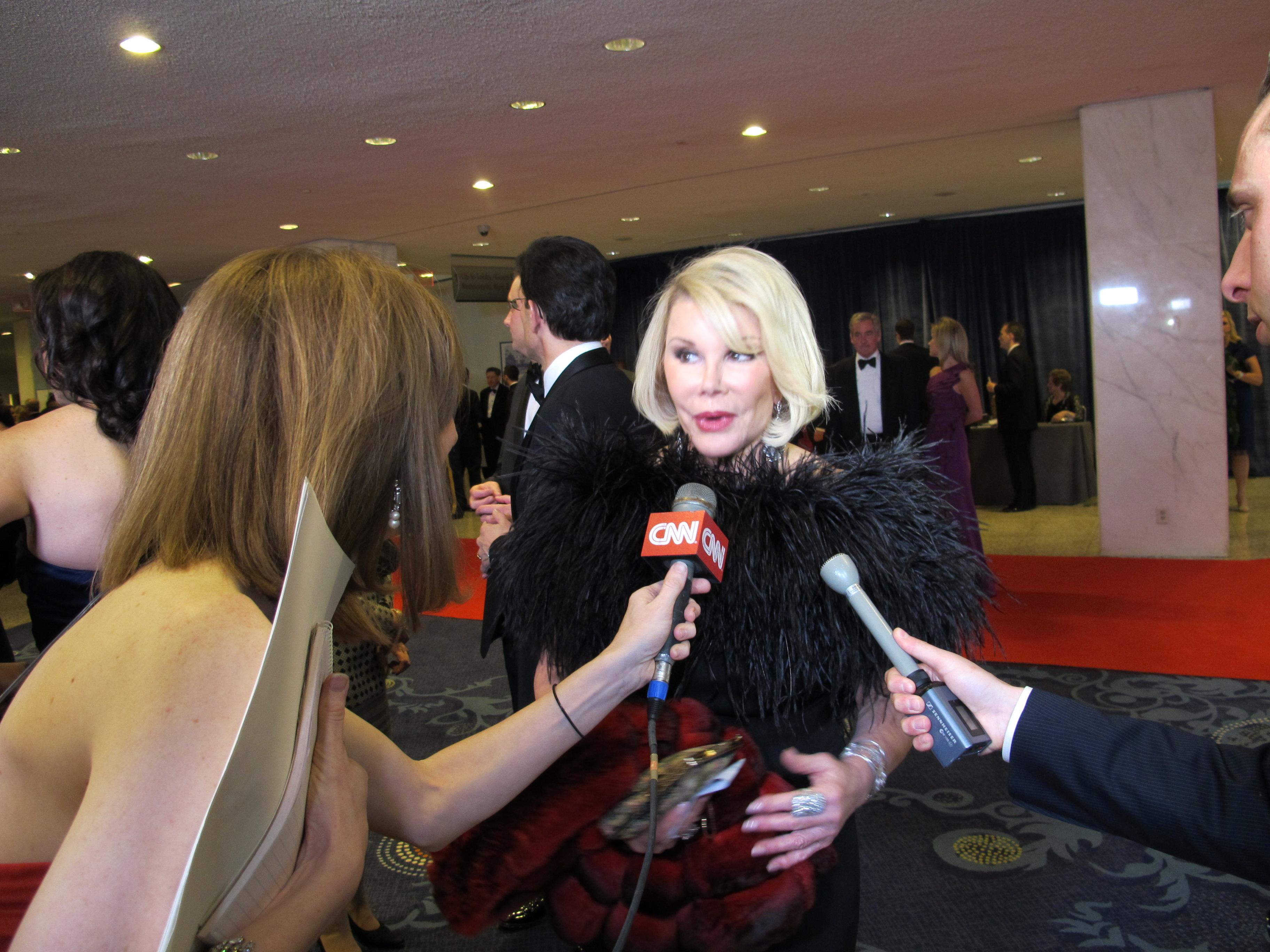 Joan Rivers, the sassy comedian whose gossipy “can we talk” persona catapulted her into a career as a headlining talk-show host, best-selling author and red-carpet maven, has died.

“It is with great sadness that I announce the death of my mother, Joan Rivers,” her daughter, Melissa, said in a statement Thursday. “She passed peacefully at 1:17 p.m. surrounded by family and close friends. My son and I would like to thank the doctors, nurses, and staff of Mount Sinai Hospital for the amazing care they provided for my mother.”

She added, “My mother’s greatest joy in life was to make people laugh. Although that is difficult to do right now, I know her final wish would be that we return to laughing soon.”

"I know her final wish would be that we return to laughing soon." – Melissa Rivers on mother Joan Rivers' passing pic.twitter.com/KGsz1xUmbk

Rivers was rushed to the hospital after she suffered cardiac arrest during a procedure at a Manhattan clinic August 28.

She first rose to fame as a stand-up comedian in the ’60s, quick to poke fun at both herself — her body was a regular subject of her jokes — and the family duties that exasperated her.

“I hate housework,” went one of her jokes. “You make the beds, you do the dishes and six months later you have to start all over again.”

“I blame my mother for my poor sex life,” went another. “All she told me was ‘the man goes on top and the woman underneath.’ For three years my husband and I slept in bunk beds.”

A legend, a friend, a mentor, an icon, and wildly funny. One of a kind. RIP #JoanRivers @joan_rivers pic.twitter.com/jnAC5G4AQo

Over time, her self-mocking shtick gave way to more pointed comedy, with shrewd and cutting insults aimed at celebrities and politicians. Comedians such as Roseanne Barr, Sarah Silverman, Kathy Griffin and Chelsea Handler owe a great deal to Rivers’ brash, commanding personality, which was unusual when she first came up.

She was a popular talk-show guest, most notably on Johnny Carson’s “Tonight Show,” and used that platform to become one of Carson’s regular guest hosts — and, in 1983, his permanent guest host.

But their relationship was severed when, in 1986, she became the host of her own talk show on Fox, then a new television network. Her show would air opposite the “Tonight Show.” Carson, feeling betrayed, cut her off cold. She didn’t appear on the “Tonight Show” again until Jimmy Fallon took over as host earlier this year.

.@Joan_Rivers was a dear & wonderful friend who I've known for 45yrs. Great guest, pal, comedian & mother. We will never see her likes again

Rivers’ Fox talk show was short-lived and its cancellation coincided with a dark period in her life, including the suicide of her husband-manager, Edgar Rosenberg, three months after the show was pulled.

Still, the comedian eventually bounced back, first with a daytime talk show, then as co-host with daughter Melissa of E!’s red-carpet coverage. The two Rivers became mainstays of awards season — later for the TV Guide Channel — with Joan known for mocking celebrities and their outfits there and on the show “Fashion Police.”

4 the first time in years I got down on my knees & prayed tonight! I encourage U 2 do the same 4 @Joan_Rivers my grandma! #inconsolable

Rivers also became known for her extensive plastic surgery, which — in typical Rivers fashion — she flaunted rather than played down.

“I’ve had so much plastic surgery, when I die they will donate my body to Tupperware,” she said.

Watching Joan Rivers do standup at age 81 was incredible: athletic, jaw-dropping, terrifying, essential. It never stopped. Neither will she.

‘Screaming her way through life’

Joan Alexandra Molinsky was born June 8, 1933, in Brooklyn, New York, the daughter of a doctor. Her childhood home wasn’t always a happy one; her mother, though gifted with a strong sense of humor, was critical, and her father was softhearted but tight with a dollar. Her parents argued over money regularly. Rivers attended Barnard College and had dreams of making it as an actress, a dream both parents discouraged.

After giving up performing after college, she had a brief marriage, and then turned to comedy. She became a regular at Greenwich Village coffeehouses and was part of Chicago’s Second City comedy troupe for a time.

A 1965 booking on Carson made her career. She soon had her own talk show and kept up regular appearances on “Tonight” and several talk and variety programs.

She met Rosenberg in 1965, not long after the Carson appearance. They married four days later. The two maintained a you-and-me-against-the-world attitude, as noted in a 1987 People article after Rosenberg’s suicide.

“Joan and Edgar, pursued by the same ghosts and hurts, feeling mutually threatened by adversaries real and imagined, trusted only each other and existed as an island built from intense and protective loyalty,” wrote the magazine’s Richard Meryman.

Rivers summed up the impact of his death bluntly, of course.

“All that happened to me,” she told The New York Times, “was my husband committed suicide, my daughter didn’t talk to me for two years, and I was broke.”

A year after Rosenberg’s death, she joined the cast of Neil Simon’s “Broadway Bound.” Indeed, she often took refuge in work, whether it was writing books, mocking celebrities, starring in Las Vegas or even appearing in a documentary about her life, 2010’s “Joan Rivers: A Piece of Work.”

Rivers was often a polarizing figure, recognized for her quick wit but feared for her underlying wrath. She was well aware of her personality, once describing herself as “screaming her way through life.”

Some of the criticism was standard Hollywood fare. In 1978, Rivers directed a movie, “Rabbit Test,” starring Billy Crystal as the world’s first pregnant man. The reviews were mediocre.

“I sat in the midst of an audience that broke its silence only to yawn, take orders for popcorn, and (in the case of audience members under 5) break into tears,” wrote Roger Ebert, giving the film one star.

Rivers shrugged that off. “Seventy percent of the critics have hated my movie,” she told Ebert. “The other 30% were geniuses, knew their work and were sensually attractive.” Nevertheless, she never directed again.

‘It’s my job to make them laugh’

More recently, her red-carpet quips and “Fashion Police” commentary got her attacked as cruel. In 2013, Jennifer Lawrence noted of Rivers’ chatter, “They put values in all the things that are wrong and show that it’s OK to just point at people and call them ugly and call them fat and they call it fun.”

Rivers immediately struck back: “She has been touched up more than a choirboy at the Vatican,” she told the New York Post.

And earlier this year, she abruptly left a CNN interview when asked about her “mean” reputation.

She was also criticized for comments about the Cleveland kidnap victims, the Gaza conflict and for calling first lady Michelle Obama “a trans.”

Always, Rivers soldiered on. “I don’t want a warm hand on my shoulder. I don’t want sympathy audiences. It’s my job to make them laugh, and I’m a professional, and my husband was a professional,” she told People two weeks after her husband died.

She earned several honors over her career. She was nominated for a Grammy and a Tony, and won a Daytime Emmy for her early-’90s talk show. She had a successful jewelry line that she sold on QVC.

She almost never apologized and rarely looked back. After all, she said, it was her bluntness that made her who she was.

“I succeeded by saying what everyone else is thinking,” she said.

Rivers is survived by her daughter, Melissa, and a grandson, Cooper.