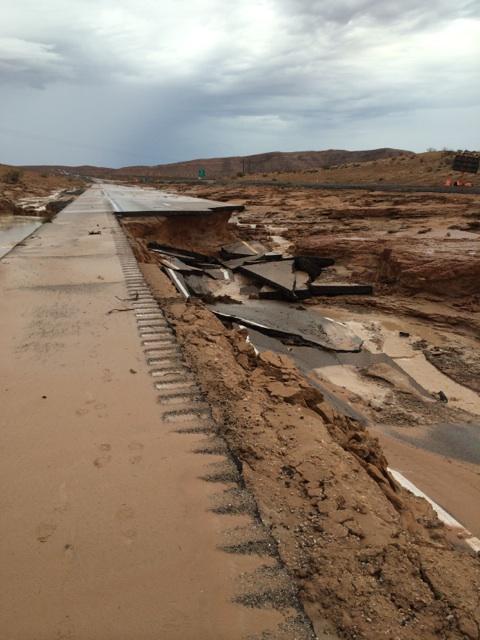 Flash floods that slammed parts of the southwestern United States are now blamed for two deaths.

A woman in Arizona was swept away by water when she and her husband tried to drive through a flooded area on Monday, and the vehicle was picked up by the water, the Pinal County Sheriff’s Office said.

Another Arizona woman was killed after her car was submerged in floodwaters, the Tucson Fire Department said.

Rescuers were unable to reach the vehicle in time.

“Within a minute of us getting there, the car washed away,” Capt. Barrett Baker told CNN.

The waters were up to 12-feet deep, he said, and pushed the car for several blocks.

Record-setting rains left up to 200 children trapped briefly in an elementary school in Moapa, Nevada, on Monday.

The students at Perkins Elementary school, about 60 miles from Las Vegas, were with teachers and were not in danger, said Highway Patrol Spokesman Loy Hixson.

Flash flooding also washed away a portion of Interstate 15 near the community of Glendale, taking several vehicles with it.

No one has been injured, but the flooding damaged so much of the highway that it may not be fixed until at least Wednesday, Hixson said.

In Arizona, Gov. Jan Brewer declared an emergency Monday as flooding from the historic rains closed roads and schools in her state.

What caused the record-setting rains and flash floods in the Southwest? Blame Norbert, which hit Mexico’s coast as a hurricane on Saturday.

Now the storm system is moving through the United States, and it’s still packing a punch.

“This could go on for a few more days,” CNN Meteorologist Chad Myers said.