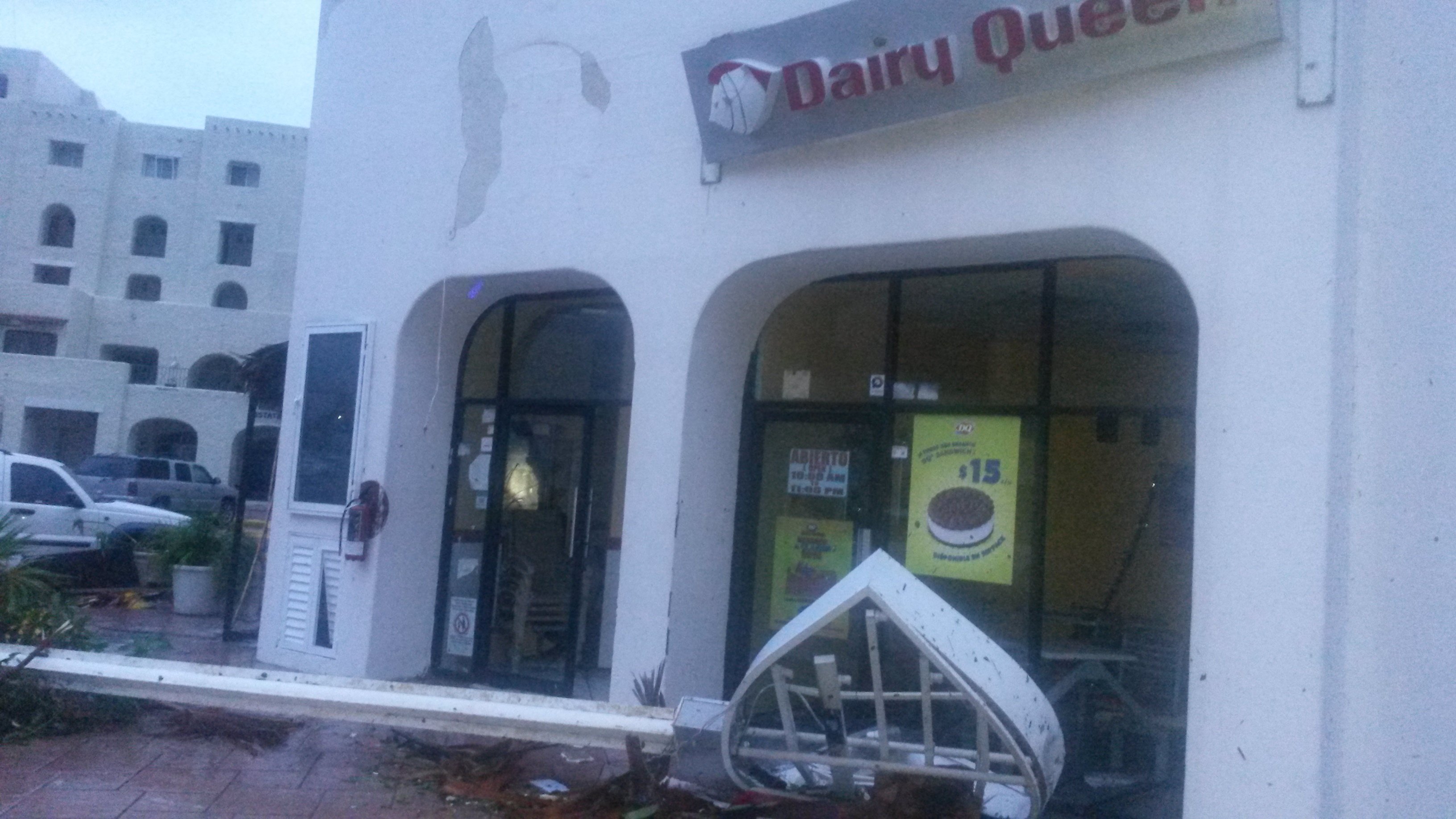 (CNN) — The once-powerful Hurricane Odile weakened to a tropical storm as it worked its way across the Baja California peninsula early Tuesday.

Still packing 65 mph winds, the storm lashed the region with torrential rains and the potential for flash flooding, according to the National Hurricane Center. Rainfall amounts of 6-12 inches are forecast, with isolated amounts of up to 18 inches.

Odile left a mess in its wake — snapped palm trees, washed out roads and tapped tourists trapped at Mexican resorts.

The storm left stunned residents and tourists in its wake.

Sarah McKinney, who was in Cabo San Lucas on maternity leave from her job in Arkansas when the then-Category 3 storm hit with 125 mph winds Sunday night, tweeted photos of the wreckage Monday: the collapsed roof of a restaurant, a shuttle van flipped over, a resort’s swimming pool pushed into the ocean.

Every car she walked by after the storm had broken windows, she wrote. The normally pristine marina in the idyllic resort town was littered with debris.

“2 days ago we walked along the marina happy with not a care in the world,” she said. “Today I’m shocked and saddened.”

Early Tuesday the storm was about 25 miles (40 km) west-northwest of Santa Rosalina, Mexico, packing winds of 65 mph (100 kph) as it headed northwest. It was expected to continue to weaken, becoming a tropical depression on Wednesday, forecasters said.

On Sunday, gales from Odile whipped torrents of rain ashore, chasing visitors in popular tourist destinations into close quarters. Streets in Cabo San Lucas were drenched. Palm trees were knocked over, and outdoor markets were trashed.

Raul Frias, from Mexico City, was at Club Regina in Cabo when he tweeted that he felt a “great vibration” in a shelter and that something “big was coming down.”

McKinney and her newborn daughter, Madison, had already evacuated out of harm’s way from their first hotel to a second one. But even there, the room roared like a wind tunnel as Odile passed over.

She piled up her belongings in the bathtub to protect them from the water seeping through the door to her room. She dammed it up with a mattress, but it still came in about an inch deep.

“I’ve cleared the beds and linen closets and have my daughter and I held up in the bathroom,” she told CNN.

“The pressure was horrific, but now it is eerily calm — just how people describe when the eye passes over,” she said.

But then the winds smacked the hotel again, and McKinney headed back into the bathroom.

“The backhalf is definitely worse,” she posted to Twitter. “More debris and stronger winds and rain. Bedroom is getting soaked from water seeping in.”