Heavy rains cause flooding, road closures in portions of Utah 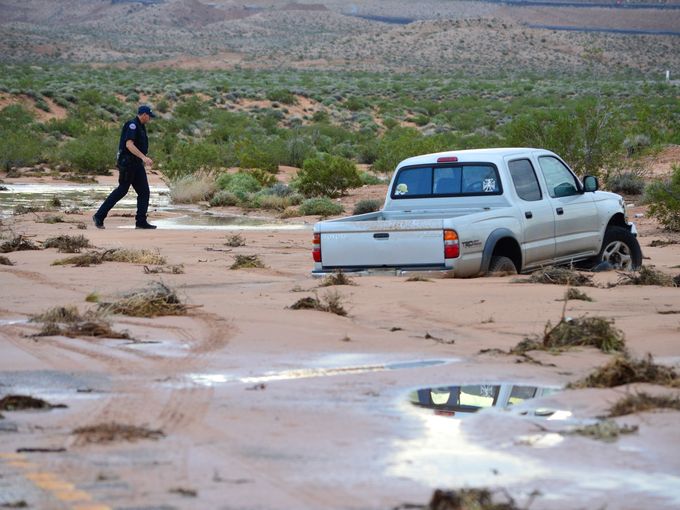 SALT LAKE CITY — A large weather system has moved in from Arizona and is traveling north causing flash flooding issues in southern and central Utah and widespread rain throughout northern Utah, according to the National Weather Service in Salt Lake City.

Brian McInerney, hydrologist with NWS, said the storm has caused flash flooding in Zion National Park resulting in the closure of Kolob Road.

All roads through the park were closed due to flooding, according to a tweet from Zion National Park, but some of those roads have now reopened.

The release states crews are currently working to reopen the closed roads in the wake of a thunderstorm that dropped 1.5 to 2 inches of rain Saturday and sent flows of rocks and debris across the roads. All park facilities at Zion remain open.

Hurricane police tweeted out a road closure in the area of 1150 West and 200 South due to the amount of water in Goulds Wash.

A video shot in Garfield County showed flooding near Cannonville, Utah. See the video below, which is courtesy McKoye Mecham.

Washington County Safety has been tweeting updates regarding road closures as well as safety tips for drivers, click here to follow their feed for updates.

Other weather issues were reported in Tooele County, and UDOT reports road debris has slowed traffic on SR 196 in the area of milepost 12.

More than 100 young adults were stranded in the west desert after getting stuck in the heavy rains during a party late Friday night.

Highway 31 in Emery County has been closed at mile marker 39 due to a small mudslide that left debris on the road, according to Emery County dispatch officials. It was not clear when the road was expected to reopen.

UDOT's website indicates SR 29 at milepost 13 has been reduced to one lane, which is causing delays.

Visit UDOT's commuter link website for the most up to date information regarding road closures, delays and road conditions.

Northern Utah is expected to get one to two inches of rain by Monday.