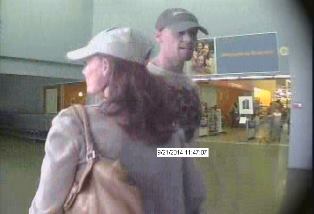 According to information from the Davis County Sheriff’s Office, a man and a woman are wanted in connection with a residential burglary, during which several items including the credit cards were stolen.

Surveillance images from the stores they visited show the suspects from several angles. See the gallery above for the images.

The first suspect is described as a white man who stands about 6-feet tall and is in his late 20s. He was last seen wearing blue jeans, a white long sleeve shirt with skull wings on the front, a black and gray ball cap and black boots. The man has a tattoo on his back that is visible above his shirt collar.

The second suspect is described as a white female who stands about 5-feet 6-inches tall and is about 26 years old. The woman has dark hair and was last seen wearing a black jacket, blue jeans, a white tank top, white sandals and a white hat. She was carrying a brown purse.

The pair were last seen leaving in a gold-colored 4-door Pontiac, possibly with damage to the driver’s side fender near the headlights. The vehicle is pictured in the gallery above.

Anyone who sees the suspects or has information regarding their whereabouts is asked to contact police at 801-451-4150. Tipsters should reference case number D14-07263.