One person was shot Wednesday morning at a war memorial near Canada’s Parliament in Ottawa, police there said, amid media reports that gunfire also was heard in Parliament. – CNN

(CNN) — Michael Zehaf-Bibeau has been identified by Canadian officials to their American counterparts as the suspected gunman in Wednesday’s shooting in Ottawa, multiple U.S. officials told CNN.

The gunman was killed after two shooting incidents — one at the Canada War Memorial, which is near the Parliament building, and another round of shooting inside Parliament — in Ottawa, where this kind of violence is extremely rare.

Bibeau, who was born in 1982, was a convert to Islam and had a history of drug use before he converted, two sources said.

Canadian broadcaster CBC reported that Bibeau has a record of drug arrests going back 10 years.

The shootings in the Canadian capital left a soldier dead and the city on lockdown.

And it may not be over yet.

Authorities haven’t ruled out the possibility that an additional shooter could be on the loose. And Ottawa Police Constable Chuck Benoit told CNN that there was more than one person involved in the shootings.

“We have to apprehend and arrest the people that are involved in this morning’s incident,” he said, “and at this time we don’t have these people.”

The soldier appeared to have been shot in the back, said Peter Henderson, a journalist who was at the memorial at the time of the shooting. Other soldiers who were nearby doing drills at the time ran to help, he said.

“This is a dynamic and unfolding situation. I understand that people have many questions and we are committed to providing some answers as soon as we are able,” Assistant Commissioner Gilles Michaud, commanding officer of the Royal Canadian Mounted Police National Division, told reporters Wednesday.

Three people are hospitalized in stable condition with injuries, said Dr. Jim Worthington of The Ottawa Hospital. One of them has a gunshot wound.

Hours after gunshots thundered through the halls of Parliament, forcing people to barricade themselves in offices, police were still scouring the area and a lockdown remained in effect.

“If they thought that they had the situation under control, we would have been let out a long time ago. We haven’t been. There’s still no word on whether we will be,” said Josh Wingrove, a reporter for the Globe and Mail newspaper who witnessed the shooting and remained at Parliament Wednesday evening. “This is by no means a situation that is considered over.”

In Twitter posts, several Canadian lawmakers hailed a top security official as a hero, crediting him with shooting the gunman inside Parliament.

“MPs and Hill staff owe their safety, even lives, to Sergeant at Arms Kevin Vickers who shot attacker just outside the MPs’ caucus rooms,” Craig Scott, a member of Parliament, wrote.

A gunman entered the nearby building on Parliament Hill, officials said.

“I heard rapid fire — gunshots going very loud — and I figure maybe 20-plus shots within 10 seconds,” Canadian Deputy House Leader Kevin Lamoureux told CNN. He was one level below the gunshots.

Soon, Lamoureux and others were outside the building, taken to another building nearby for safety. Others still inside were on lockdown. Some members of Parliament said on Twitter that a gunman had been killed. Police say “one male suspect” is dead.

Canadian authorities have given the name of a suspect to U.S. law enforcement and have asked for FBI assistance in tracing the person’s activities, a senior U.S. law enforcement official told CNN. Only one name has been provided, and it is not clear whether the name is genuine or an alias, the official said. The official declined to provide more details, including the suspect’s nationality, ethnicity and age.

A U.S. law enforcement official told CNN that a connection to terrorism hasn’t been ruled out.

On Monday, a man who Canadian authorities said was “radicalized” killed a Canadian soldier with his car. The man was then shot and killed.

There was no immediate indication that the Monday and Wednesday incidents were related.

In response to the shootings, the North American Aerospace Defense Command, or NORAD, has increased its alert posture, CNN has learned. That means that it has increased the number of planes on a higher alert status ready to respond if needed. NORAD and Canadian authorities are in contact, an official told CNN.

Parliament remained on lockdown at mid-afternoon.

MP Tony Clement tweeted that he heard “at least 30 shots” and apparently was able to take cover with colleagues. He also tweeted that Harper was secure.

Harper was evacuated from the building and is safe, tweeted his press secretary, Carl Vallee.

“Obviously, we’re all shaken by it,” Obama later told reporters, “but we’re going to do everything we can to make sure we’re standing side by side with Canada during this difficult time.”

Ottawa Mayor Jim Watson said that Wednesday was a “a sad and tragic day for our city and our country.”

“There’s no pain greater than losing a loved one — to have it happen in such circumstances as this morning is beyond expression, and underlined by a sad anger within my heart,” he said.

Gunfire in the main Canadian Parliament building started in the foyer, and a second round of shooting happened about a minute later in a hallway or near the entrance to the Parliament’s library, Ottawa journalist Josh Wingrove told CNN.

He said several officers had weapons drawn, and most of the dozens of shots that he heard appeared to have been fired by officers at the gunman.

When the shooting ended, a person was lying motionless on the ground near the library entrance, Wingrove said.

Meanwhile, authorities are trying to get a handle on a chaotic situation.

“We don’t know if it’s someone from the military who was targeted or not,” Marc Soucy of the Ottawa Police Service told CNN. He was specific about when gunfire was reported: 9:52 a.m. ET.

Obama was briefed on the situation in Ottawa, White House officials said.

The suspect in Monday’s vehicle attack, Martin Rouleau Couture, reportedly converted to Islam about a year ago. Police arrested him last July and confiscated his passport, but lacked enough evidence to keep him in custody, said Martine Fontaine of the Royal Canadian Mounted Police. 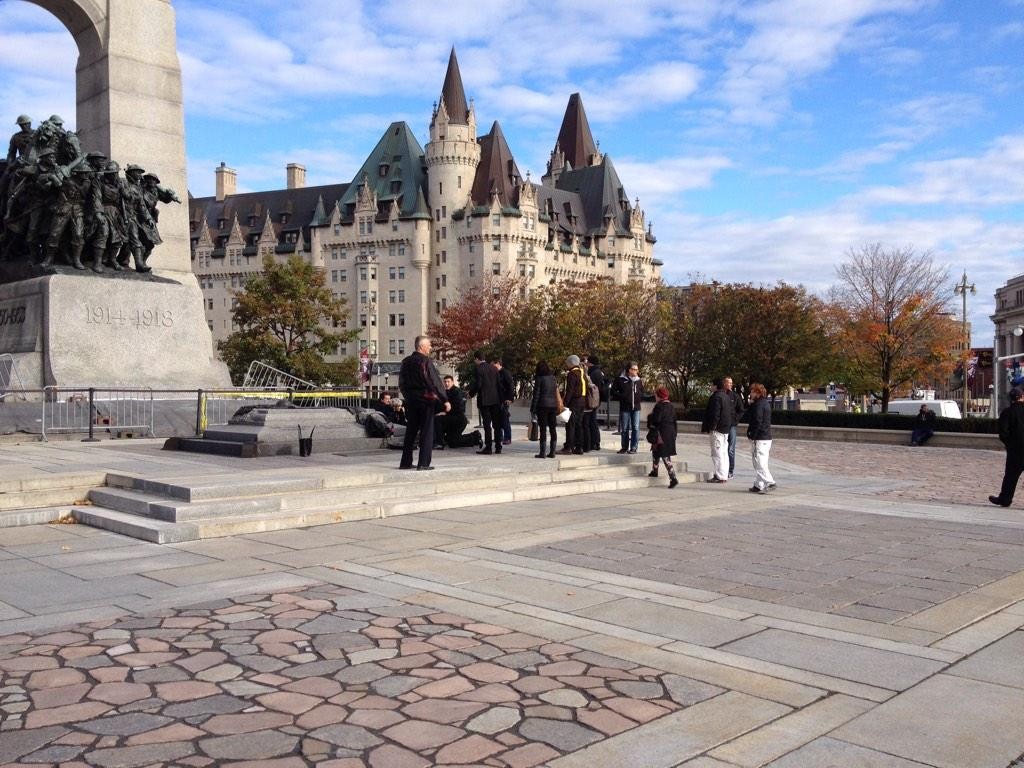