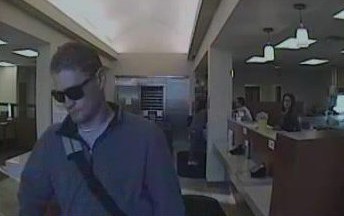 LAYTON, Utah – Officials have released pictures of the suspect accused of robbing a bank in Layton Thursday.

Police said the suspect in these photos gave a note to a teller at the Wells Fargo bank at 320 Gentile St. in which he demanded money and indicated he had a gun.

However, police said the teller never saw a weapon.

The suspect ran from the bank with an undisclosed amount of money and no one was injured.

Officers said the suspect is a Caucasian man who appears 20-to-35-years old.

He has a tall, thin build with very short hair.

Police said he was carrying a light-colored bag with a dark strap over his shoulder.

Layton High School was under a lockout for almost an hour after a bank robbery Thursday.