Video: LDS President Henry B. Eyring’s speech given at the Vatican 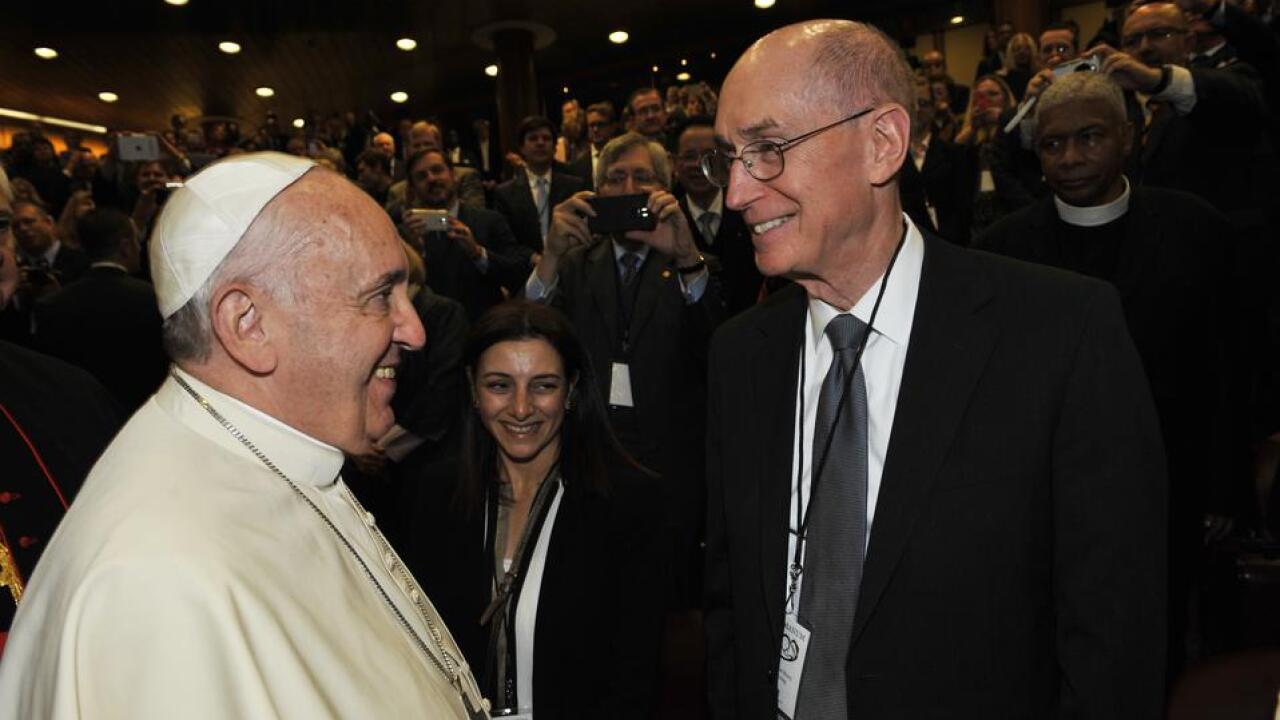 The following is a transcript of a speech called “To Become as One,” given November 18, 2014 by President Henry B. Eyring, First Counselor in the First Presidency of The Church of Jesus Christ of Latter-day Saints, during a colloquium on marriage and family held at Vatican City. For more information on the colloquium, click here and here.

I am grateful to be invited to be a witness at this Colloquium. I am especially grateful for the opportunity to give evidence that a man and a woman, united in marriage, have a transcendent power to create happiness for themselves, for their family, and for the people around them.

I am an eyewitness of the power of the union of a man and a woman in marriage to produce happiness for each other and for their family. The evidence I offer is personal, yet I trust my recital may trigger in your memories what you have seen that would point to a general truth beyond the experience of one couple and one family.

The evidence I offer begins when I was a single man, living alone without any family near me. I thought I was happy and content. I was a doctoral student at Harvard University in Cambridge, Massachusetts. My research work was going well, I was serving others through my church, and I found time to play tennis often.

An assignment in my church took me to a morning meeting in a grove of trees in New Hampshire. As the meeting ended, I saw in the crowd a young woman. I had never seen her before, but the feeling came over me that she was the best person I had ever seen. That evening she walked into our church meeting in Cambridge. Another thought came to my mind with great power: “If I could only be with her, I could become every good thing I ever wanted to be.” I said to the man sitting next to me, “Do you see that girl? I would give anything to marry her.”

We were married a year after I first saw her. The wedding ceremony was in a temple of The Church of Jesus Christ of Latter-day Saints. The words spoken in the ceremony included a promise that we might be husband and wife in this life and for eternity. The promise included that whatever descendants we might have would be bound to us forever if we lived worthy of that happiness. We were promised that after this life, we could continue to enjoy whatever loving family sociality we could create in life.

My wife and I believed those promises, and we wanted that happiness. So we acted to make it possible through the great variety of circumstances of life. There was sickness and health, struggle and some prosperity, the births of six children, and eventually the births of 31 grandchildren, and on the day I arrived I was told we had the first great grandchild. Yet with all the changes, there have been consistencies since that wedding day more than 52 years ago.

Most remarkable to me has been the fulfillment of the hope I felt the day I met my wife. I have become a better person as I have loved and lived with her. We have been complementary beyond anything I could have imagined. Her capacity to nurture others grew in me as we became one. My capacity to plan, direct, and lead in our family grew in her as we became united in marriage. I realize now that we grew together into one—slowly lifting and shaping each other, year by year. As we absorbed strength from each other, it did not diminish our personal gifts.

Our differences combined as if they were designed to create a better whole. Rather than dividing us, our differences bound us together. Above all, our unique abilities allowed us to become partners with God in creating human life. The happiness that came from our becoming one built faith in our children and grandchildren that marriage could be a continuing source of satisfaction for them and their families.

You have seen enough unhappiness in marriages and families to ask why some marriages produce happiness while others create unhappiness. Many factors make a difference, but one stands out to me.

If unselfishness is the key to complementary marriage between a man and a woman, we know what we must do to help create a renaissance of successful marriages and family life.

We must find ways to lead people to a faith that they can replace their natural self-interest with deep and lasting feelings of charity and benevolence. With that change, and only then, will people be able to make the hourly unselfish sacrifices necessary for a happy marriage and family life—and to do it with a smile.

The change that is needed is in people’s hearts more than in their minds. The most persuasive logic will not be enough unless it helps soften hearts. For instance, it is important for men and women to be faithful to a spouse and a family. But in the heat of temptation to betray their trust, only powerful feelings of love and loyalty will be enough.

That is why the following guidelines are in “The Family: A Proclamation to the World,” issued in 1995 by the First Presidency and Quorum of the Twelve Apostles of The Church of Jesus Christ of Latter-day Saints:

“Husband and wife have a solemn responsibility to love and care for each other and for their children. ‘Children are an heritage of the Lord’ (Psalm 127:3). Parents have a sacred duty to rear their children in love and righteousness, to provide for their physical and spiritual needs, and to teach them to love and serve one another, observe the commandments of God, and be law-abiding citizens wherever they live. Husbands and wives—mothers and fathers—will be held accountable before God for the discharge of these obligations.

“The family is ordained of God. Marriage between man and woman is essential to His eternal plan. Children are entitled to birth within the bonds of matrimony, and to be reared by a father and a mother who honor marital vows with complete fidelity. Happiness in family life is most likely to be achieved when founded upon the teachings of the Lord Jesus Christ. Successful marriages and families are established and maintained on principles of faith, prayer, repentance, forgiveness, respect, love, compassion, work, and wholesome recreational activities. By divine design, fathers are to preside over their families in love and righteousness and are responsible to provide the necessities of life and protection for their families. Mothers are primarily responsible for the nurture of their children. In these sacred responsibilities, fathers and mothers are obligated to help one another as equal partners. Disability, death, or other circumstances may necessitate individual adaptation. Extended families should lend support when needed.”[1]

Those are things people must do for us to have a renaissance of happy marriages and productive families. Such a renaissance will require people to try for the ideal—and to keep trying even when the happy result is slow to come and when loud voices mock the effort.

We can and must stand up and defend the institution of marriage between a man and a woman. Professor Lynn Wardle has said, “The task we face is not for summer soldiers or weekend warriors who are willing to work for a season and then quit.”[2] A past president of our Church, Gordon B. Hinckley, offered similar counsel, as well as encouragement, saying, “We cannot effect a turnaround in a day or a month or a year. But with enough effort, we can begin a turnaround within a generation, and accomplish wonders within two generations.[3]

Those are small numbers when you think of the billions of parents and families that Heavenly Father watches down upon in this world. But if that family bonding passes through just a few generations, happiness and peace will grow exponentially among the worldwide family of God.

As we work to build and encourage faithful, loving marriages in which men and women become as one and nurture their families, the Lord will multiply our efforts. As we join together in this work, I promise progress toward that happy result. In the name of Jesus Christ, whom I serve and whose witness I am, amen.