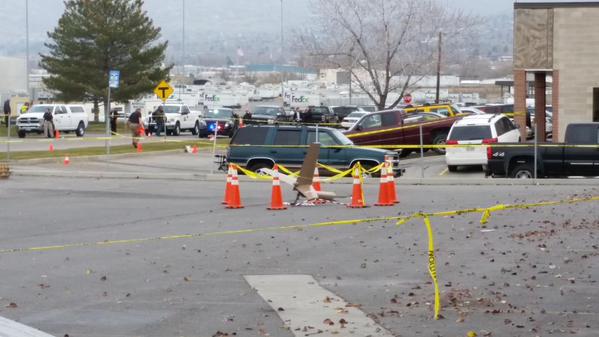 The crash occurred in the area of 900 North and 500 West. The helicopter crashed into an empty building.

According to North Salt Lake Police Chief Craig Black, the helicopter is embedded in the roof of the building. No one was in the structure at the time.

Orr and Hauer were the owners of Flight Ready Aviation, based out of the Sky Park Airport, which is less than a mile away from where the aircraft crashed.

"As soon as I saw this helicopter I knew something was wrong it was really low and it was making weird grinding noises," said witness James Keeler.

Witnesses said their first instinct was to run for cover, as they saw the Robinson R-44 helicopter falling from the sky around 2 p.m. Tuesday.

"I heard an explosion looked and saw a helicopter starting to come apart, the top rotor came off, the bottom rotor came off, and it landed on the building next door," said witness Alan Ostler.

The helicopter left a trail of debris a half a mile long, before crashing through the roof of the building.

"I was just playing on the field, I saw these two big metal chunks fly down and I saw an explosion and smoke," said Cameron Salt of Odyssey Elementary School.

Cameron and his sister were enjoying recess with their classmates when they saw the crash.

"I was very scared because I thought it was so close," said Madison Salt.

Removing the helicopter has now become the biggest challenge.

"The helicopter right now is embedded in the top of that building and that's part of what we will be working upon with the building inspector, Federal Aviation Administration and fire department," Black said.

Leaking jet fuel sparked several fires, but they were mostly extinguished by the building's sprinkler system. Both men inside the helicopter were killed on impact.

"One victim had been pulled out, they were able to get him out, there is one still inside that would be needed to be extricated to get out and that wasn't possible," said Dave Powers, South Davis Metro Fire Agency Deputy Chief.

The FAA is investigating the cause of the crash.