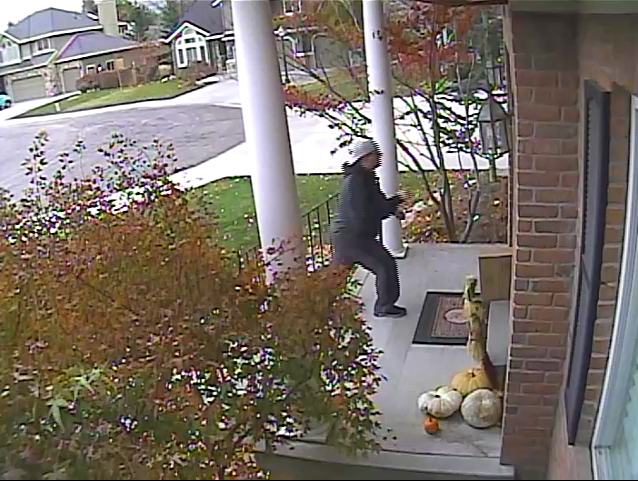 Police initially received surveillance images from a resident who had a package delivered by UPS stolen from their property, and the footage depicted a man and a dark-colored Toyota Scion.

Sgt. Corbett Ford, a public information officer for Cottonwood Heights Police Department, said they put out an internal bulletin, and Thursday a detective spotted a vehicle matching that description. After following the vehicle, the detective made a traffic stop on the Scion.

“He subsequently arrested the driver for possession of methamphetamine, possession of stolen property,” Ford said. “This guy actually had a package that had just been stolen from a delivery in the West Jordan area, so he actually was still out capering and up to nefarious activities.”

The man, identified by police as 37-year-old Douglas Drew Kemp,  also had a knife and an “Airsoft” BB gun. The guns fire plastic BBs and are designed to appear like real firearms, and Corbett said the bright orange tip required on such BB guns to mark them as toys had either been removed or painted over on the gun in the man’s possession.

“They are roaming around in the valley, they are stealing items from people, and then, to top that off, they have items made to look like weapons in the event that somebody tries to confront them,” Ford said.

A second man, 34-year-old Adam Pat Anderson, was arrested at a residence in Murray, and Ford said that man was an accomplice in the thefts.

“Well, I think you could probably definitely say that this is kind of one of those ‘Grinches’ that stole Christmas, but unfortunately you have people that are up to no good,” Ford said. “They are doing nefarious acts. They are stealing things from people, so in that sense, yes, they are [Grinches]. Absolutely.”

This time of the year is often the busiest for delivery services, and Ford said with more and more people shopping online and opting for delivery, package thefts are not uncommon around the holidays. He said there are several things people can do to protect their packages.

“Again, we have people that have, without a doubt, a substance abuse problem,” Ford said. “It doesn’t appear that they are working, so how else are they going to supply their problem?”