UPDATE: As of about 8:20 p.m., Saturday night, police had moved away from the nexus of the rally to block off traffic in a one-block radius of the protesters, who were gathered in the street at about 100 South and State Street. As of about 8:40 p.m., Todd Tanner reported the crowd had dwindled to 50 or 60 protesters and that traffic was moving again except at 100 South and State Street.

A UDOT traffic camera at the scene showed traffic was still being diverted near 100 South and State Street as of about 9:40 p.m. The protesters lingered for some time. Salt Lake City police tell FOX 13 News they weren't sure what time the group finally dispersed Saturday.

SALT LAKE CITY -- A crowd estimated to include more than 200 people took to the streets of Salt Lake City Saturday, chanting "Black lives matter" and "I can't breathe", in a protest against police violence put on by the group Utah Against Police Brutality, and police have blocked off streets and intersections around the protesters.

FOX 13 News' Todd Tanner supplied video from the scene of the protest, which focuses on police violence. Tanner reports a crowd of more than 200 has gathered, and for some time some of the protesters blocked Main Street and others laid down on a TRAX line. The protesters have since moved from the TRAX lane, and UTA officials stated that, aside from a train delayed due to mechanical issues, lines were running as scheduled.

Police blocked streets and intersections as the protesters marched, and then reopened them as the crowd cleared each area. The group passed through Temple Square at one point, and as of about 7:20 p.m. they were moving south on State Street near 200 South. As of about 7:55 p.m. the protesters had been blocking off the intersection at 200 South and State Street for about 5 minutes, alternately laying down in the street and standing to link arms. See the video below for footage. As of about 8:20 p.m., police had blocked traffic in a one-block radius of the protest, which centered at 100 South and State Street.

Protester Gregory Lucero spoke to FOX 13 News about their purpose.

"We called for people to come here, shut it down," he said. "We organized several speakers earlier. I myself spoke, and then after that it was people in the street. The organic anger of the people at this absolutely unjust ruling, this lynching of Eric Garner that has really sparked this sort of anger at law enforcement and their unjustified murders."

The protest unfolded peacefully. Protesters were chanting "I can't breathe", which has been chanted at many protests nationwide in response to a New York grand jury's decision not to indict a police officer in the chokehold death of Eric Garner. Garner's mother has urged protests to continue but to be peaceful.

Garner's death has drawn widespread protest, coming on the heels of protests following a grand jury's decision not to indict a police officer in the fatal shooting of Michael Brown in Ferguson, Missouri. Utahns have joined in these protests, with local rallies often drawing attention to fatal incidents in Utah involving police, most notably Darrien Hunt, who was shot and killed by Saratoga Springs police after he allegedly lunged at officers with a sword, and Dillon Taylor, who was shot and killed by Salt Lake City police responding to a report of a man with a gun.

Both shootings were ruled justified by the respective county officials.

FOX 13 News has a crew at the scene of the protest, and we will have more information as it becomes available. See the videos above and the photos below for images from the scene. 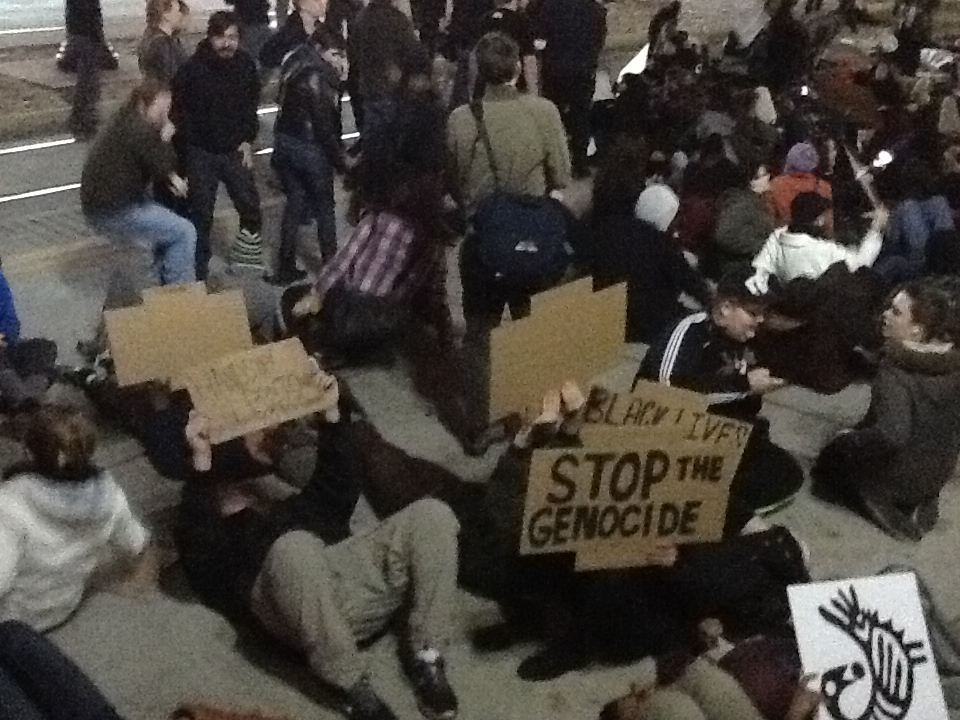