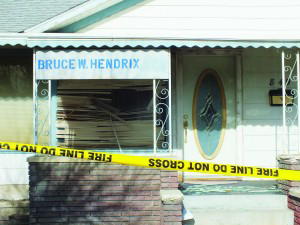 ELY, Nev. –Police in Nevada were searching for a man in connection with the murder of his wife and cases of arson at his home and business, and on Thursday the man was found dead.

The White Pine County Sheriff’s Office was looking for 63-year-old Bruce Wayne Hendrix, and at one point they believed the man may have been heading to Utah.

Sheriff Dan Watts said a group of hunters in Lincoln County located the man’s truck, which they recognized from a police flyer, Thursday night and called authorities. Hendrix was located partially up the mountainside from where the truck was located, dead of an apparently self-inflicted gunshot wound.

Police had received a call Monday at 7 p.m. about a fire at the Hendrix home. When crews arrived, the windows of the home were busted out and crews who responded could smell gasoline. The business was also set on fire but went out without causing major damage. Fire officials determined an accelerant was used in both fires, Watts said.

Julia Hendrix was found inside the home on a bed, and a medical examiner determined the woman died of a single gunshot wound to the chest.

Police had issued warrants for the man’s arrest on one count of murder and two counts of arson. The Ely Times reports that Julia Hendrix  had reportedly asked for a divorce a few days before she was killed.

The photos in the gallery above are courtesy of Garrett Estrada and the Ely Times.