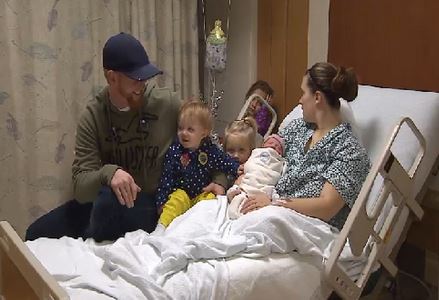 The photos of Hazel Grace Zimmerman and her family in the gallery above are courtesy of the Cleveland Clinic via FOX 13 News sister station FOX 8 in Cleveland.

By Emanuella Grinberg and Carma Hassan

(CNN) — They won’t be able to count for a few years, but when the time comes, they’ll be able to practice using their unique birthdays.

Two babies were born Saturday at 10:11 a.m. If you follow the American style of writing dates, that means their birthdays appear in sequential order: 10:11 on 12/13/14.

Parents David and Katherine Jones did not realize it until a nurse excitedly pointed it out, said Kimberly Romo, a spokeswoman for Tucson Medical Center in Arizona.

The couple had other things on their mind — Victoria Marie Jones was not due until December 31. Instead, she came early via C-section.

“The doctors just said it had to be like right now, and none of us realized what time it was,” David Jones told CNN. “One of nurses in there is the one that actually caught it. All of this happened so fast.”

Victoria Marie Jones came in at 5 pounds and 10 ounces and just in time for the Navy veterans to catch the annual Army-Navy football game.

“It is a tradition for us to watch the game,” he said.

Around the same time, Hazel Grace Zimmerman was born to parents Leisha Campbell and Shawn Zimmerman in Ohio’s Cleveland Clinic.

Hazel is the couple’s fourth child, hospital spokeswoman Sabrina Powers told CNN. She weighed in at 7 pounds and 14 ounces.

“We knew she was going to be born today, we just didn’t know it would be at 10:11 a.m.,” said Leisha Campbell told CNN afiliate WEWS. “Everyone is telling us we should play the lottery. We feel this is a lucky day and are excited to get family photos with Santa.”

Another baby was born on 12/13/14 at 15:16 (3:16 for those not using military time). Maclane Thomas Flynn is pictured to the right. Click here for the details from FOX 13 News sister station WHO TV in Des Moines, Iowa.