About a hundred people gathered outside the Salt Lake City & County Building in support of law enforcement, holding signs and chanting "we love the police!" About 20 feet away, a smaller group shouted: "Hands up! Don't shoot!"

The smaller group was a counter-demonstration to the pro-police rally, which was attended by people including Utah Attorney General Sean Reyes and the families of police officers killed in the line of duty.

"When we call 911, it's because we need someone to answer the call. So what are we doing?" Shante Johnson, the widow of Draper Police Sgt. Derek Johnson, said to FOX 13 as she looked at the counter-protest. "This is crazy. They (police) are here to protect us."

Pro-police demonstrators eventually gathered in a large crowd and then marched toward State Street where they shook the hands of two Salt Lake City police officers assigned to monitor both demonstrations.

Organizers of the counter-demonstration insisted that many of their members were not anti-police, but wanted greater accountability in the criminal justice system.

"Most of the folks here are not anti-police, but we are anti-police brutality," said Gregory Lucero, a member of the group Utah Against Police Brutality. "We think police need to be held accountable."

Demonstrators recited the names of Hunt and others in Utah who had been killed in officer-involved shootings that they believed were not justified. Both sides made reference to shootings of police officers and civilians across the nation.

"Being a good cop means you are going to account for your actions. It doesn't mean that you're going to rely on being immuned by the system to get away with murder," said Victoria Sethunya, who held a sign with the picture of Darrien Hunt, a man killed by Saratoga Springs police in a shooting authorities ruled justified.

"Being a good cop means you don't see color."

Occasionally, the two sides would encounter each other, creating a few tense moments. As counter-protesters would shout "Hands up!" some of the pro-police demonstrators mocked them by responding "Don't loot!"

A heated argument occurred when one man attending the pro-police rally took offense at a counter-demonstrator's sign that read "Blue Lives Don't Matter." Overall, both demonstrations were largely civil.

In brief comments to FOX 13, Reyes said he did believe police officers should be -- and are being -- held accountable for misconduct.

"They (police) know they’re not above the law and we’re the first ones, when we see the abuse of the great authority and power they have, to come down on them,” the attorney general said. “But, overall, they’re a good group and they deserve our appreciation. That’s what we wanted to come out and do today.” 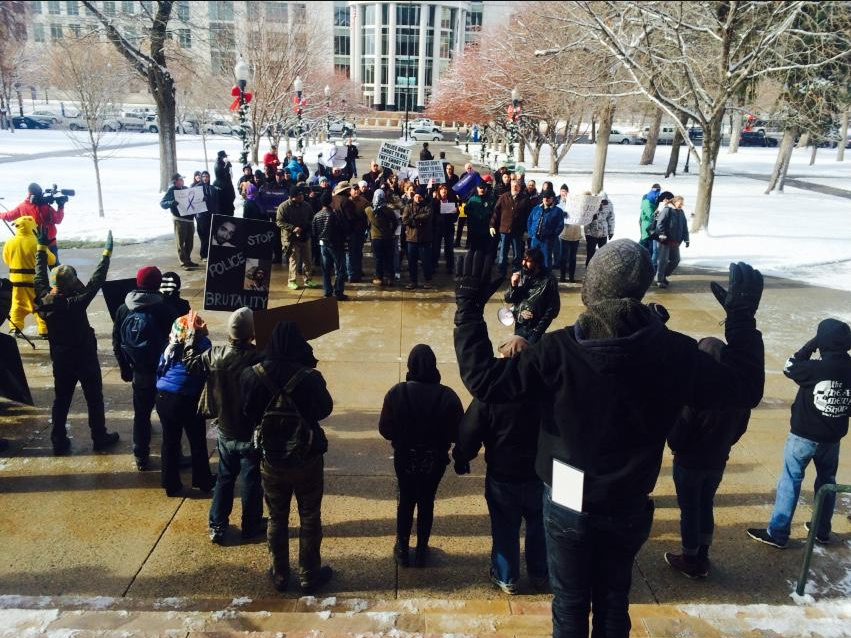