OGDEN CANYON, Utah -- Ogden Canyon has reopened after a structure fire closed the road Saturday morning, and a father and son were displaced by the blaze.

The house fire, located at 680 Ogden Canyon, was reported at 7:26 a.m., according to Weber County dispatchers. Fire officials said the fire began in a chimney and spread to the attic.

Robert Stark said he could smell a funny odor when he went to bed but couldn't figure out what the scent might be. When he woke up, his house was smokey.

“I walked outside, I looked at the chimney outside the house, and there were black spots on it," he said. "I saw smoke coming out of the shingles on the lower roof."

Nearly 20 firefighters responded, and the Canyon was closed as a result during a time when skiers are often heading to resorts in the area.

“As you saw on your way up, it’s a very narrow canyon especially in this section," said Brandon Thueson, who is the Weber County Fire Marshal. "So it made it a difficult situation not only for travelers commuting up and down the canyon... [but also] figuring out where we are going to park all of our fire engines."

Firefighters struggled with the blaze due to cold temperatures of about 15 degrees, but it was extinguished after about an hour.

“It makes it difficult, our water lines tend to freeze up, and, as you've seen, we've created quite an ice rink out here," Thueson said. "So it becomes really slippery for people. So yeah, firefighting in the winter time in extreme temperature becomes difficult."

The inside of the home sustained significant damage.

Stark said his 11-year-old son is taking the loss of their home at the start of the new year pretty hard.

The American Red Cross arrived on scene to provide assistance. Stark said he and his son will be able to stay at a relative's home nearby while they rebuild and won't need housing assistance. 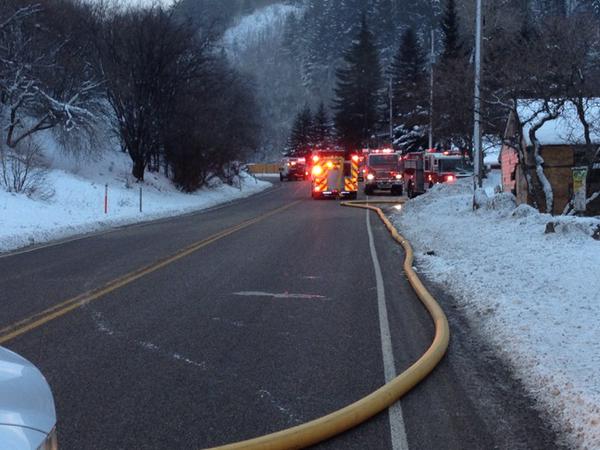