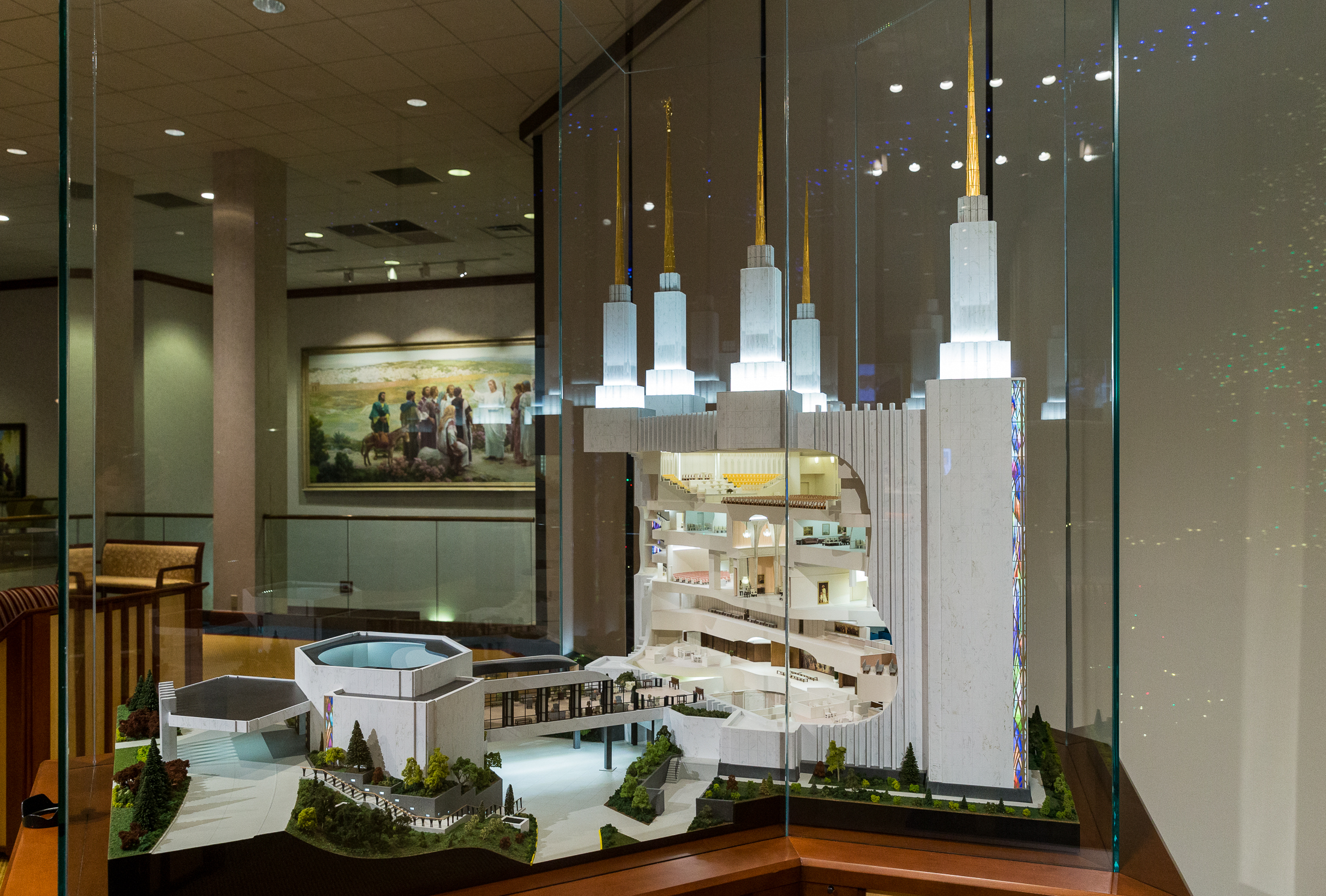 WASHINGTON D.C. – The Church of Jesus Christ of Latter-day Saints unveiled a new display at the visitors’ center of their temple in Washington D.C. Saturday, and the 1:48 scale replica of the Washington D.C. Temple is similar to a popular exhibit at Temple Square in Salt Lake City.

The model was built using three-dimensional scans of the temple’s interior and exterior, and the finished model stands at just under 10-feet tall.

According to a press release, portions of the model are open to the exterior in order to depict, “Ordinance and sealing rooms and the baptistery.” LDS Temples are, “Where the highest sacraments of the [LDS] faith occur, such as the marriage of couples and the sealing of families for eternity.”

Open houses have been held at LDS Church temples after their construction but prior to the ceremony that is held to dedicate the building for religious use. Temple grounds and visitors’ centers are generally open to the public.

According to a press release from the LDS Church, local community and religious members attended the special reception held at the temple’s visitors’ center Saturday. President Henry B. Eyring, first counselor in the LDS Church’s First Presidency, attended. Eyring’s brother, Elder Harden Eyring, serves with his wife—Loi Anne—as the director of the visitors’ center.

“We have been hoping and planning for this temple display for most of the two years my wife and I have been serving here at the Washington D.C. Temple Visitors’ Center,” Elder Harden Eyring stated. “Now that it has arrived and is ready for its introduction to the public, we are simply overwhelmed with how beautiful and inspiring it is.”

President Henry Eyring spoke about the quality of the construction.

“This model is remarkable in the sense that it catches the beauty and I think the feeling of reverence,” he stated.

A similar model, a 1:32 scale depiction of the LDS Church’s Salt Lake City Temple, was unveiled at the South Visitor’s Center on Temple Square in May 2010.

Mark Lusvardi, director of public programs for the LDS Church, said the exhibit in Salt Lake City has drawn a great deal of attention.

“It has been one of the most popular exhibits on Temple Square,” he stated in the press release.

The press release also offered specifications about the model and information about how it was created. The model is 9-feet, 5-inches tall; 6-feet, 7-inches wide and 5-feet, 8-inches deep. The model is placed in front of a window facing the temple, so all levels of the building are featured.

The architectural plans for the temple had to be converted to digital files, as the original plans were all hand-drawn. 3D scans and digital measurements of rooms were taken in order to create the replica.

The temple itself is located on a 52-acre site about 10 miles north of the United States Capitol. It serves LDS Church members in the areas of Washington D.C., Pennsylvania, Virginia, West Virginia, Maryland, Delaware and New Jersey as well as visitors from other areas.

The release stated that Elder Harden Eyring said he hopes that, “the experience of contemplating this display will create a curiosity and desire in many sons and daughters of God to know more and to seek to understand how they can open the doors of the temple for themselves and their families.”

The Church of Jesus Christ of Latter-day Saints operates 144 temples worldwide. The photos and video above are courtesy of the LDS Church’s website, mormonnewsroom.org.