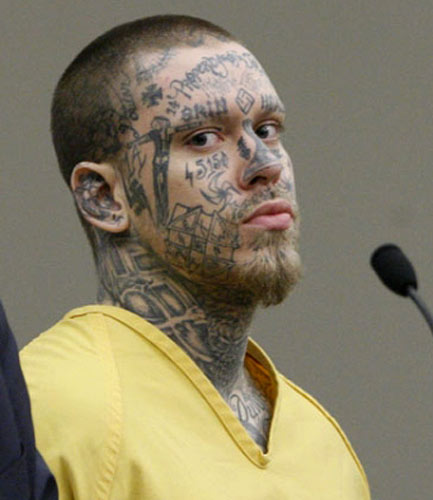 SALT LAKE CITY — The state’s top court has ruled convicted cop-killer Curtis Allgier has forfeited his right to an attorney after he “repeatedly engaged in extreme dilatory, disruptive, and threatening conduct” toward his lawyers.

“They are the dumbest ass clowns I’ve ever had the EXTREME dishonorable displeasure of being forced to know.” – Curtis Allgier

Allgier, a heavily tattooed white supremacist, is appealing his plea deal to murder in the death of corrections officer Stephen Anderson back in 2007.

The ruling handed down Friday by the Utah Supreme Court and obtained by FOX 13 detailed threats Allgier had made to his court-appointed counsel in the appeals process.

In a bar complaint Allgier filed against one attorney, the court said the inmate was “trying to be nice, but [would] resort to other means of removal if [the attorney thought] he could sell [Mr. Allgier] out. . . . he don’t want to learn how much I don’t give a damn.”

The court ruling said Allgier also stated of his lawyers:

“they [Mr. Allgier’s appointed attorneys] are the dumbest ass clowns I’ve ever had the EXTREME dishonorable displeasure of being forced to know were even somehow on the planet, let alone incompetently and ineffectively misrepresented by[,] and NEVER . . . will they have the honor of being in my Aryan GOD presence or having any kind of contact with me period!!”

In its ruling, the Utah Supreme Court ruled that forfeiting a constitutional right to an attorney is “an extreme measure.”

“We conclude that making threats to the welfare of appointed counsel may constitute extreme conduct justifying a forfeiture of counsel,” the ruling said.

The Utah Supreme Court declared Allgier was on his own for the limited remains of his appeal.