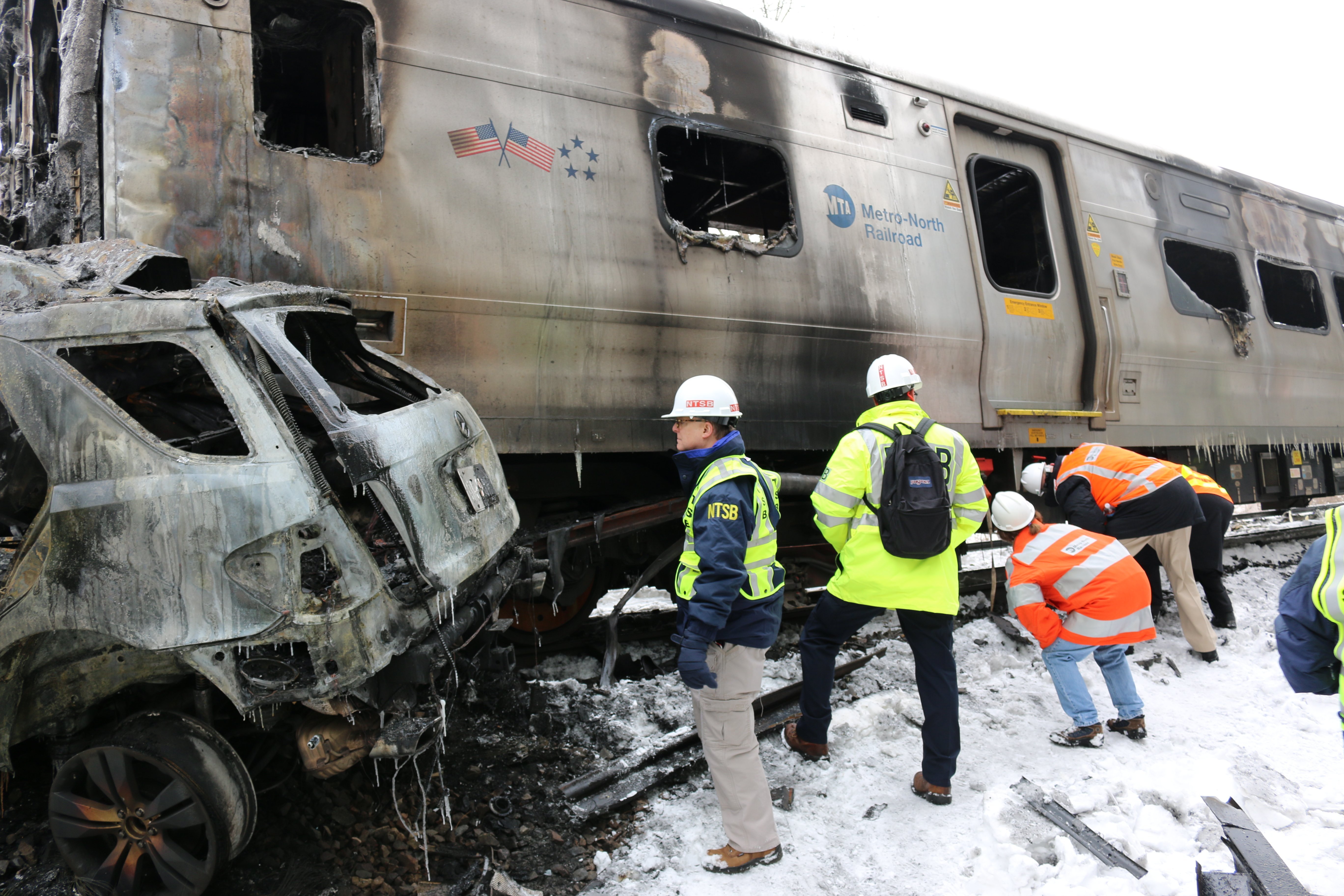 NEW YORK (CNN) — Justin Kaback hardly felt a thing when the commuter train he was riding smashed into a vehicle that had attempted to cross the track Tuesday night in Valhalla, north of New York City.

He didn’t even know there had been an accident, or that the crash would kill the driver — a woman whose Mercedes SUV was stopped on the track — and five other people on the train.

The crash was the deadliest in Metro-North Railroad’s 32-year history, transit officials said.

The governor’s office and the Metropolitan Transportation Authority on Wednesday morning revised the total number of fatalities, initially reported as seven.

Kaback said he received no warning about the fire about to ignite in the first car of the train.

The SUV’s driver may have gotten out to see what was holding it back, a rail official said. She got back in the SUV and may have been trying to drive off the tracks when the Metro-North Railroad train hit her at about 7 p.m., the official said.

The northbound train, which had left New York City’s Grand Central terminal more than an hour earlier, pushed the SUV 400 feet, said Westchester County Executive Rob Astorino. The third rail was pushed up from the track and rammed through the entire first car of the train.

The scene was “horrific and unimaginable,” Astorino said. Engulfed by flames, the first rail car was a melted and charred hulk.

“To think about what these commuters went through when last night they got on the 5:45 train, probably talked to somebody at home, saying they’re on their way and the world became upside down,” Astorino told reporters Wednesday.

All but one of the six fatalities were burned beyond recognition, Astorino said. Dental records were being used to identify the victims.

The crossing where the wreck occurred is “a little dangerous,” the county executive said. Traffic had been diverted to the area after an unrelated accident on a nearby highway.

“That’s an area I think the state (Department of Transportation) needs to look at to see if we can improve,” he said.

On Wednesday, eight people were still being treated at Westchester County Medical Center, including one in critical and another in serious condition, hospital officials said. Three suffered burns. Four were discharged overnight.

“The silver lining here is that the injuries and the extent of the injuries weren’t as serious as they could be, comparatively, to some other major trauma activations,” Dr. Joseph Turkowski, burn unit director, told reporters. “We could have received a lot more patients, a lot more serious injuries, and it could have resulted in a lot more deaths. We are thankful for that.”

Emergency department director Dr. Ivan Miller said: “Many of us take Metro-North and we have families that take Metro North. So it does strike close to home.”

Inspectors from the National Transportation Safety Board are investigating.

“We will work closely with the NTSB and local officials to determine the exact cause of this tragedy, and work to ensure such incidents are not repeated,” Metro-North Railroad President Joseph Giulietti said in a statement.

The cause of the crash has yet to be determined, but Astorino said: “At this point, all indications from the MTA at least is that it was not a problem with the tracks or anything. It was unfortunately human error but that’s part of the investigation.”

Kaback, the passenger who spoke to CNN’s Don Lemon, said he only felt the train braking, coming to a complete stop, not the impact of hitting a vehicle.

“They shut down the engine. They cut power. They cut the air,” he said. Then there was dead silence.

The first word of anything gone wrong came from other passengers. They came back from the front of the train, saying they smelled gasoline.

“We’ve got to move to the back of the train,” Kaback said they told him.

While the passengers fled from the gas fumes, a short announcement over the train’s loudspeakers informed passengers that the train had struck a car, he said.

He heard no further details or instructions.

‘The train is on fire’

Outside the train, somebody yelled, “The train is on fire,” and the car he was in was growing hotter, Kaback said.

“That’s when I knew it was time to get off,” he said. The other passengers did, too. They threw open emergency doors and broke windows, he said. Everyone exited in an orderly manner without panic.

The snow on the ground, which sloped sharply down from the track, made climbing off the train difficult.

Once outside, Kaback took pictures of the first car of the train, as flames climbed out its windows.

Photos of the scene and aerial video from CNN affiliate WCBS showed flames and smoke pouring out windows of the commuter train.

The first car was the only one that caught fire, Astorino said. “Everything is melted inside.” There was not much damage from the second car back.

The train was full when the accident happened, Astorino said. “There were about 650 (people) total on the ride home.”

The crash was the deadliest in Metro-North Railroad’s history, said Marjorie Anders, spokeswoman for the MTA. The previous deadliest crash happened in December 2013, when four passengers were killed and more than 70 were injured in a derailment on the Hudson Line in the Bronx.

Those accidents resulted in six fatalities and 126 injuries, according to the NTSB, which found “several safety management problems that were common to all of the accidents.”

The day before the NTSB announced its findings, the MTA named David Mayer — a former NTSB managing director — as chief safety officer.

NTSB teams with expertise in several areas, including highway and rail traffic signals, crossing gates, fire propagation and recorders, will be at the scene for five to seven days, NTSB member Robert Sumwalt told reporters Wednesday morning in Washington as investigators prepared to travel to the site.

The total investigation might take about 12 months, he said.

CNN’s Marina Carver and Laura Ly contributed to this report.