LAYTON, Utah -- Two people were extricated from a single-engine Cessna airplane after it crashed on a Layton golf course Saturday morning.

The crash occurred at Valley View Golf Course, 2501 E. Gentile Street. There were two male occupants in the plane, officials stated. The pilot was treated for minor injuries on scene and the other occupant was taken to McKay Dee Hospital in fair condition.

According to a press release, witnesses said they saw the plane glide into the area of the golf course and clip its wing on a tree. After clipping the tree, the plane spun face down and ended up coming to a rest in a sand trap.

“It was extremely lucky that no patrons at this golf course sustained injuries due to the many patrons at this course today. The course also neighbors homes to the south on Gentile Street that could have been involved” said Doug Bitton, Layton City Fire Public Information Officer, in the press release.

“There was people over on the driving range and it narrowly missed them, and so boy we’re just feeling blessed and lucky that nobody was seriously hurt here today,” he said.

Volk said both men were conscious at the scene of the crash.

“The pilot looked a little more beat up," he said. "There was some blood coming from his head, and he was kind of pinned a little bit in the plane."

The pilot told authorities he was flying at about 5,000 feet when the craft experienced engine loss. The plane had departed from Skypark Airport in Woods Cross Saturday morning and landed in Logan. After the two men ate breakfast they departed to return to Woods Cross, which is when the crash occurred.

The National Transportation Safety Board is investigating. The aircraft was rented by the pair from Bountiful Flight. Jason Clark, owner of Bountiful Flight, spoke about the crash.

“We do more inspections on these airplanes than are even required for the FAA, we go over and above what we need to do to make sure these airplane are safe," he said. "So far, what we can tell is it wasn’t a mechanical problem; it was most likely pilot error."

Authorities have not released any information about what may have caused the crash, and the airplane has been moved to a nearby hangar--where it will be investigated by officials. 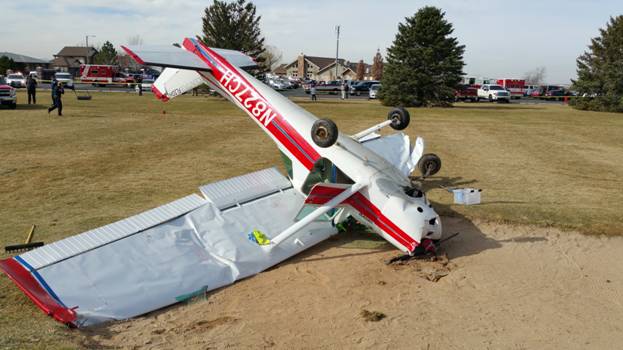