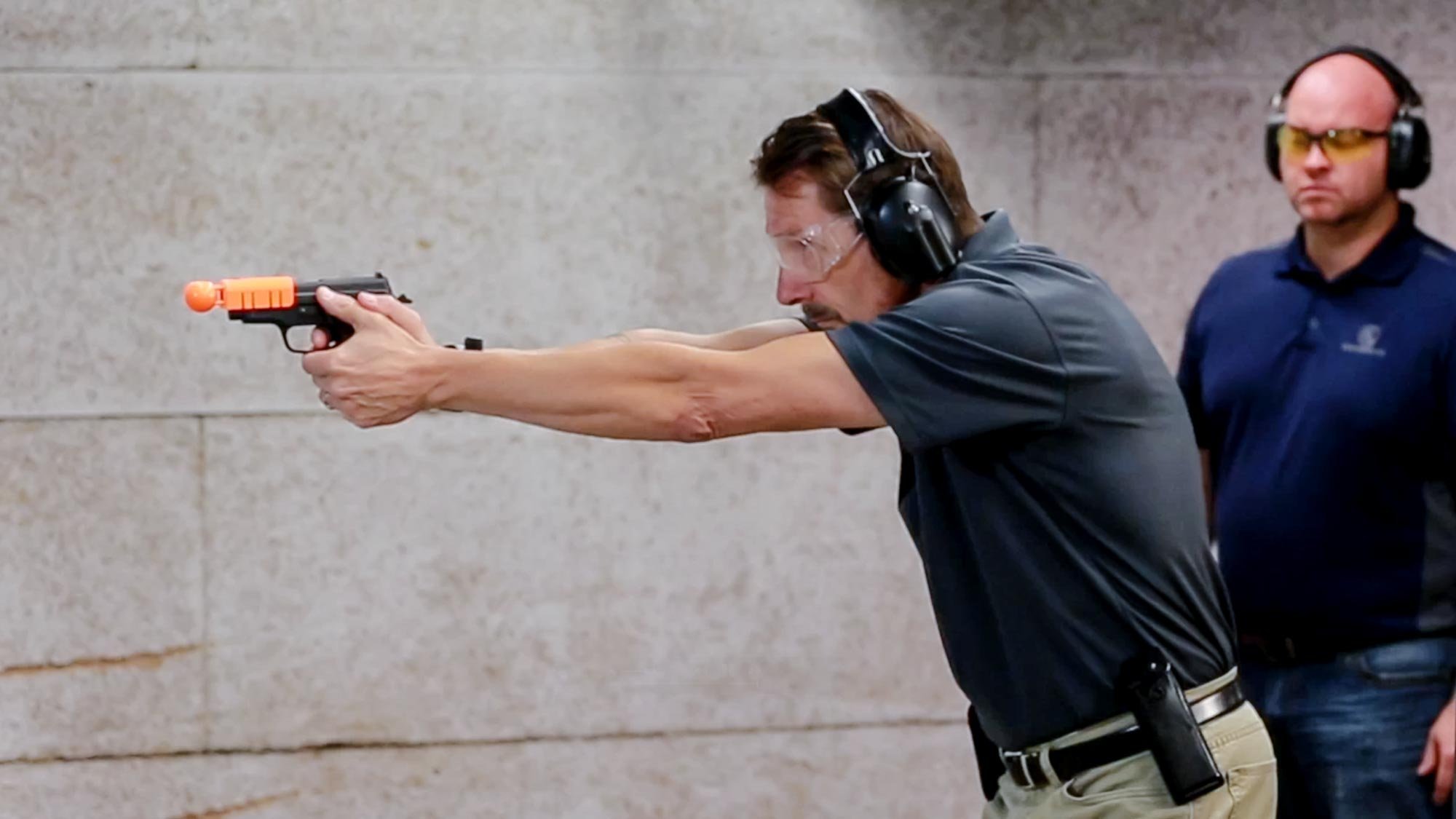 By Sara Sidner and Jason Kravarik

FERGUSON, Missouri (CNN) — The embattled police here are testing something no other department in America has tried, in an effort to prevent another potentially explosive incident in which an officer kills an unarmed civilian.

Ferguson police are evaluating a new attachment to their guns that could give a suspect a chance to live in an otherwise lethal encounter with police.

This latest piece of weapons technology is called “The Alternative,” and it’s an orange-colored plastic device mounted on a gun barrel that turns the first fired bullet into a pingpong ball-sized projectile, designed not to kill.

Several officers have been trained on how to use it, but city officials have yet to decide on making the gear a requirement.

“It’s something we’re testing for ourselves and seeing if this is even something feasible or reasonable to use for law enforcement officers,” Mayor James Knowles told CNN.

The testing began just a week shy of the six-month anniversary of the killing of unarmed black teenager Michael Brown by then-Officer Darren Wilson, who is white and has since quit the force. The August police shooting sparked an intense, sometimes violent reaction from Ferguson residents, and demonstrations spread across the country.

The new gun technology is being evaluated as a remedy to the simmering tension between police and community members.

Local officials didn’t want to speculate whether the device could have altered the outcome of the Brown-Wilson encounter. Wilson, who was cleared of any criminal wrongdoing, told a grand jury that as he sat in his squad car, Brown, who was outside the vehicle, punched him in the face. Wilson fired multiple shots at Brown, killing him.

When the gun is fired, the bullet embeds in a golf ball-sized metal bulb, attached at the muzzle. The bullet fuses inside the metal sphere, and the unit morphs into a speeding ball.

Impact would be painful, but the projectile could be far less lethal than a naked bullet, the manufacturer said. Getting hit could break bones and even kill.

“It’s gonna feel like you had a professional baseball player hit you in the chest with a hammer, so it is going to hurt,” said Christian Ellis, the CEO of Alternative Ballistics. “There is a possibility that this could kill you, but it is very slight when you compare that to a bullet.”

“It was actually created by a retired sheriff officer. He did not like the fact that people were being shot when the officers do have time (to consider options) but they had no other option in lethal force,” Ellis said.

“So this product gives the officer another option in that scenario when it’s not reactive, and they do have the time to put it on,” he said, referring to mounting the device at the end of a gun barrel.

The device, also called a docking unit, costs $45 and has a one-time use. It ejects itself from the muzzle after the police gun is fired. An officer can return to shooting again in a split second, and the bullets will be direct and unhampered.

Ellis describes the technology as one more tool for an officer’s belt. It provides an option that could spare the life of a threatening suspect.

The device isn’t without controversy. It could put an officer’s life in danger, some retired law officers say.

“Our problem is not with the device, our problem is with the concept. This device ignores the human factor,” said Charles “Sid” Heal, a retired member of the Los Angeles County Sheriff’s Department and a consultant on alternatives to lethal force.

He pointed out that The Alternative would be used in situations that could escalate with little warning, forcing officers to make yet another decision in a critical moment their lives may be on the line.

“When you’re under a lot of stress, you lose your fine motor skills and, as a result of that, pulling a trigger and thinking are far more complex than most people realize,” Heal said.

Ellis understands the reluctance on the part of some departments to test the new technology, but he noted how other former law enforcement personnel have been helping develop the device.

Ellis said the device is not for use when an officer must make a split-second decision, such as when a suspect pulls a gun.

Rather, it’s to be used when an officer has three or more seconds to decide.

During that time, an officer can place the attachment on the gun while pointing it at a suspect.

So far, The Alternative has never been tested on the human body, and it has not been used in real-life situations.

Ferguson police have trained with the device on their shooting range, but it hasn’t been taken or used on the streets.

Mayor Knowles emphasized how his city continues to evaluate the technology.

“It hasn’t been used by anyone else, which is why we are doing all of our due diligence, making sure it’s properly tested, that it does not put anyone, especially our law enforcement, in any increased danger, and we’ll just make a decision based on that,” he said.