Officials said the bones found near the roadway on Feb. 5 are those of 23-year-old Theresa Rose Greaves of Woods Cross.

Deputies said she went missing nearly 32 years ago in August 1983.

Greaves was born Oct. 1, 1959 in New Jersey, according to the missing person's website charleyproject.org.

Deputies said she moved to Utah when she was 18 years old.

Officials said she took the bus, arrived in Salt Lake City and called a friend at noon.

Deputies said she was last seen in Bountiful, Utah.

After that, she was never seen or heard from again.

Authorities said she was living with a roommate at the time of her disappearance.

Officials suspected foul play at the time of her disappearance. 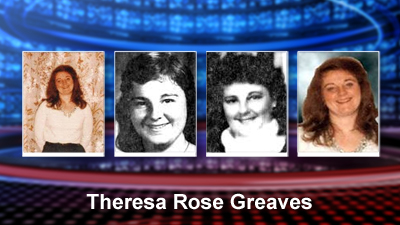 In 1993, authorities questioned Douglas Lovell about Greaves' disappearance as well as another Utah woman who went missing in 1985, Sheree Warren.

Lovell maintains his innocence in those cases.

However, Lovell pleaded guilty to the 1985 murder of Joyce Yost, stating he killed her to keep her from testifying against him in a rape case; her body was never found.

He was sentenced to death but his guilty plea was overturned on a technicality in 2010; he will face trial again.

Chief Greg Butler, Woods Cross Police Department, said his department  is working with the sheriff's office on the investigation.

“We have consulted with the original officer who did the investigation, he’s working with us on that, but this isn’t our investigation; this is an investigation we’re working on with the sheriff’s office," he said.

Back in February, a man walking along a path near the Highway 89 frontage road found what appeared to be a human skull and reported it to authorities.

Crews searched the area and found more human bones and bits of clothing.

Police started investigating what they said they considered a possible homicide.

After weeks of what officials said was similar to an "archaeological dig," deputies have confirmed the remains to be those of Greaves who has been missing for 32 years.

"Science has gone above and beyond in helping us to identify her remains, and so we're actively investigating exactly how she got to where she was found," Butler said.

Deputies have tried to notify her family but have not been able to find any living relatives at this time.

Davis County officials would like to speak with anyone who might have information at (801) 451-4150. Sgt. DeeAnne Servey, Davis County Sheriff's Office, said they intend to find answers.

"We are highly motivated in completing this investigation and finding the reason and circumstances behind why Theresa was found on that hillside in Fruit Heights," Servey said.