SALT LAKE CITY – Police are searching for multiple suspects accused in a “brutal attack” that left a man in serious condition, and officers said several bystanders who stepped in to stop the violence likely saved the victim’s life.

Det. Cody Lougy, Salt Lake City Police Department, said the attack occurred Saturday around 2 a.m. at Maxwell’s East Coast Eatery, 357 South Main Street, after an employee, who works as a bouncer, spoke up about someone saying inappropriate things to customers.

“One of their employees approached a customer who had said some inappropriate things to a couple of female customers, and this employee asked this individual to actually leave the establishment,” Lougy said. “He refused, and the employee went over there and said, ‘Hey, you need to leave’ at which point the customer attacked the employee.”

Zachary Thompson tried to get the suspect to leave, but a second suspect, believed to be a friend of the first man, also attacked and the two men dragged Thompson outside--where Lougy said the violence escalated.

Photos of suspects in an assault that occurred at Maxwell's on March 14, 2015. Courtesy SLC PD.

“This employee received multiple strikes, multiple assaults from two people,” he said. “And these two individuals actually pushed that employee over a fence at the patio area, and several other individuals stepped in and began assaulting the employee.”

Thompson spoke to FOX 13 News about the attack.

"They took and pulled me over the gate, slamming me on my back," he said. "The big guy came over the gate right on top of me. He started punching me in the face. I was being kicked in the face and stomped on."

Lougy said multiple suspects began stomping on the man’s stomach, face and chest after Thompson went down. It's believed as many as eight people were involved in the attack.

"A guy ran over to me and kicked my head like it was a soccer ball right across the face,"Thompson said.

The bouncer said that during the altercation he pulled out his baton for the first time in his life. He used the baton, striking one suspect in the shoulder with so much force the baton was bent. But that didn't stop the attack.

"He tackled me to the ground, went for my throat, grabbed onto my head and started ripping out tufts of hair while punching me in the face and others returned and started kicking and stomping on me again," Thompson said.

He suffered serious injuries that included a concussion, road rash from being dragged about 75 feet, bruises on his head, and trauma to his chest. Thompson has since been released from the hospital, but he said Saturday he was "genuinely scared for my life."

"They probably saved this guy’s life, because these individuals, it wasn’t fists,” Lougy said. “They were actually, this guy was on the ground, and they were actually stomping his head and face area, his chest area--and so this was a brutal attack…. We’re fortunate those individuals did step in and did the right thing and protected that guy from further assault.”

“So we’re asking the public’s help to get these individuals identified, so we can hold them accountable,” Lougy said.

The suspects, who fled the scene before police could arrive, are described only as being Caucasian males in their early 20s. They are pictured below. 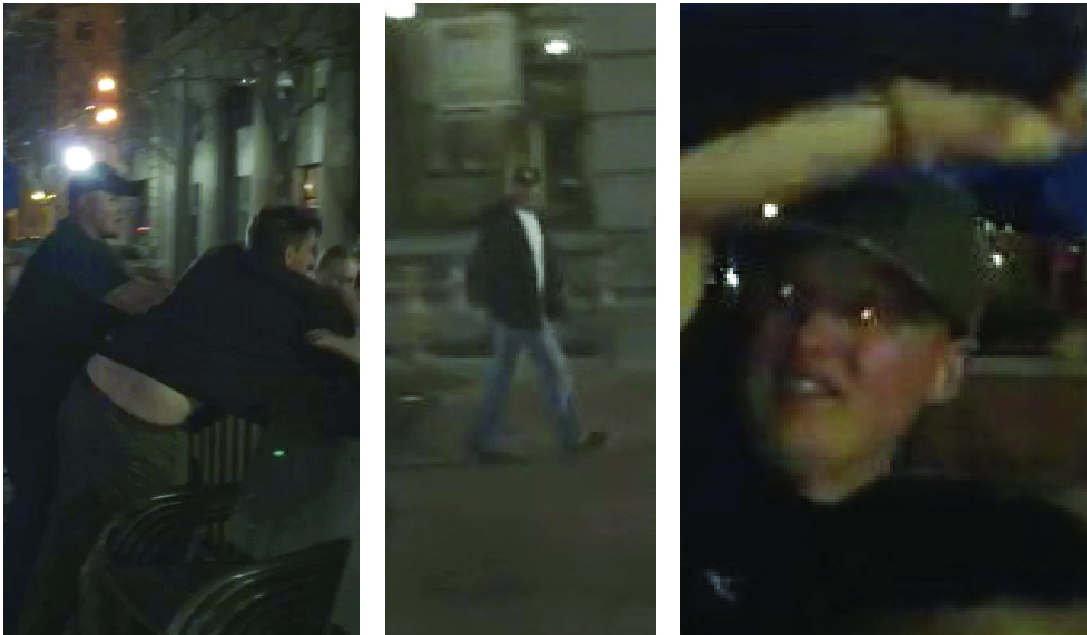 The brutal nature of the attack and the fact that multiple suspects jumped in was particularly troubling to Lougy, who called the response to the employee’s actions unfortunate.

“There’s an employee that’s doing the right thing, calling somebody for saying some inappropriate things to a female customer, asking the individual to leave--and at which point he gets severely assaulted, not by one individual but by multiple suspects,” he said.

The press release provided several ways for tipsters to contact authorities: "The Police Department asks anyone who may know the identity or location of this suspect to call (801) 799-3000. Anonymous tips may be sent by text to 274637. Please start your text with TIPSLCPD, which routes it to the police department. Then include any relevant information. Reference: case #15-44870."