PARK CITY, Utah -- About 45 homes and businesses were evacuated in Park City for several hours Sunday night, and a handful of streets were blocked off as police from six agencies searched the scene--which was reportedly cleared just before 10 p.m.

Police at the scene said they received a threat of a bomb at Treasure Mountain Inn at about 6:12 p.m., which is located at 255 Main Street.

As of just before 9 p.m., police said a bomb sniffing dog was being brought in to search all of the rooms at the hotel and by about 10 p.m. the scene was cleared and found to be safe. The individual who made the bomb threat reportedly had threatened to detonate a device if certain demands were not met.

Sgt. Jay Randall, Park City Police Department, confirmed the evacuation order had been lifted except for road closures in the immediate area of incident command, and he said they have isolated one hotel room at the Treasure Mountain Inn because they believe that room may have key evidence relating to the case.

"We have one room that we have locked down and have drafted a warrant on, so that we can process that room," he said. "At this point though we're reopening the streets, except for right here where incident command is--so that we can continue the investigation. There's a lot more things that are going on behind the scenes right now, but at this point we wanted to give you an update that we believe we have eliminated any threats of a bomb at this point."

So far no suspects have been taken into custody. Officials did not elaborate on what sorts of demands had been made by the person making the bomb threat.

FOX 13 News first heard reports of the police response just before 7 p.m., and a patron at a restaurant in the area said as they were eating dinner a waiter told them they had to leave right away.

Park City resident Corey Cutler said as they were eating dinner at Cisero's Ristorante, 306 Main Street, they were told there had been a bomb threat somewhere in the area and that they had to leave via the back door. They were also unable to reach their car to return home, as the vehicle is parked in the area blocked off by police. They were not the only people who found themselves stranded, and city officials stated shelter was available for stranded persons at Swede Alley.

Transit Center on Swede Alley is open for Main Street guests to wait until the roadblock is lifted. Water and restrooms available.

A web camera live streaming footage from Main Street captured several images of police personnel in the area, and Cutler sent several photos  from the area. See the gallery at the bottom of this story for those images. 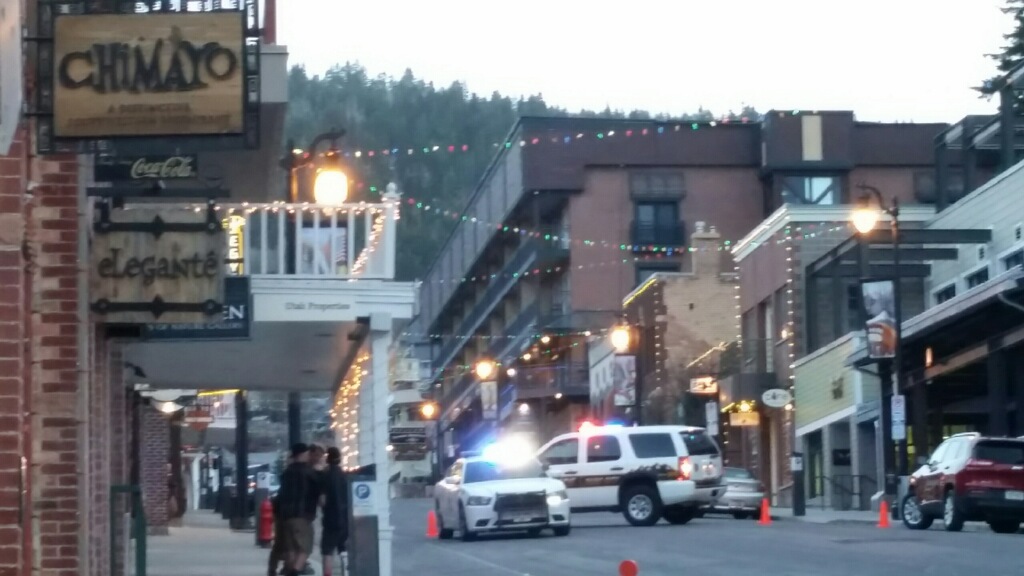 Editor's Note: Corey Cutler is  FOX 13 News' Annie Cutler's aunt and happened to be in the area when the incident occurred.