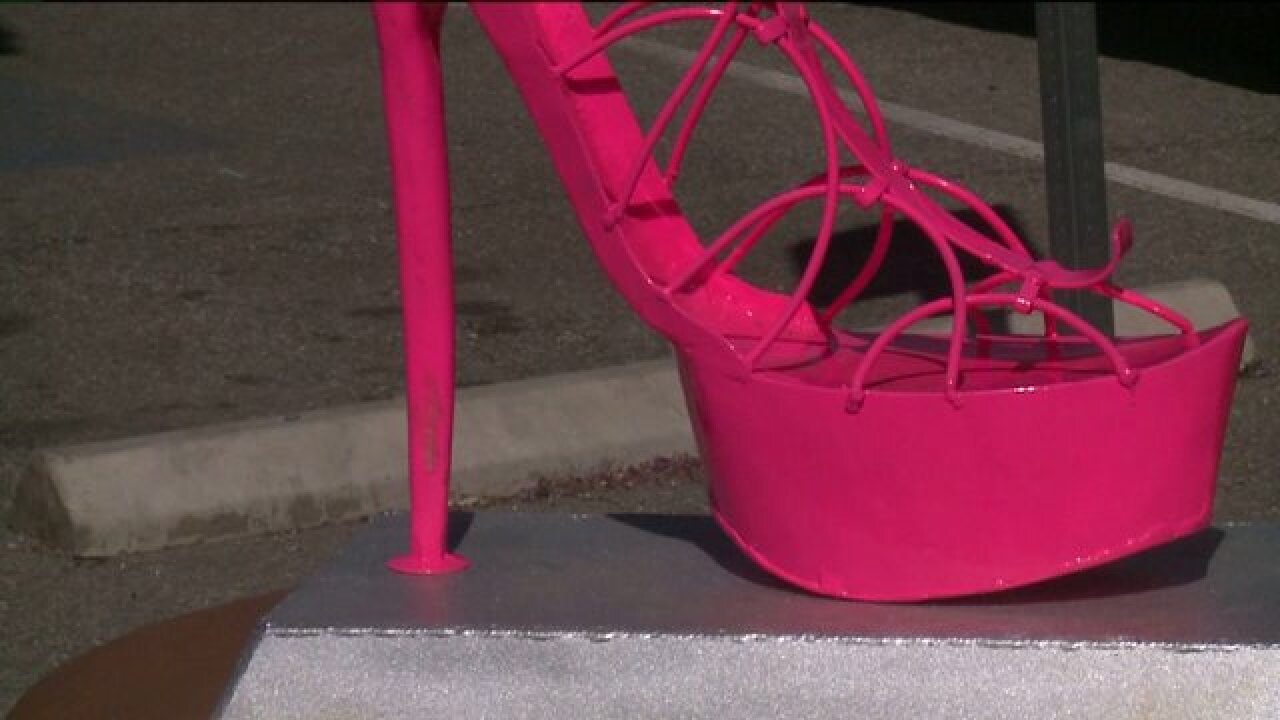 The five-foot stiletto, called “Pink Lady,” is one of the new sculptures placed around the city as part of the city-sponsored Art Around the Corner.

The metal creation is stopping pedestrians in their tracks, and drawing mixed reaction from St George residents.

“It’s just very different than the art that we have in Downtown St. George,” said Brittany Carlson. “It doesn’t seem to go with the flow.”

“It looks like it belongs in Hollywood, not St. George. I was a little shocked to see it here.” ~Amber Farmer, Hurricane resident

Art Around the Corner it’s a rotating collection of sculptures placed by a nonprofit volunteer board. The 2015 selections were installed by crews earlier this month. For the next 12 months, 20 different sculptures turn the city streets into an outdoor gallery, where all the work is for sale.

“Primarily our artists are from Utah, but we have artists from all around the country,” said Amber Rich, board member of Art Around the Corner. “We love the traditional pieces, we love the pioneers and the children, but we also love a gigantic guitar, and a pink high heel.”

The 30-foot guitar crafted from scrap metal became the point of discussion during the 2014 collection. Rich said there’s always one piece that people either love or hate, and the apparent controversy surrounding that piece means people are talking about it, and that is the overall goal.

“It looks like it belongs in Hollywood, not St. George,” said Hurricane resident Amber Farmer. “I was a little shocked to see it here.”

For some, more surprising than the pink stiletto itself, is the artist. Ivins resident Jerry Anderson crafted the sculpture. He’s most notably known for western representations.

But Anderson is no stranger to controversial subjects. His 1983 piece “The Rebels” inadvertently became the subject of debate over the political correctness of the rebel as a mascot for Dixie State University.

The majority of the people FOX 13 talked to Monday said the shoe just didn’t fit, but some see it as a fresh take on art and wouldn’t mind seeing it all the time.

“I think that’s great,” said St George resident Terri Colledge. “I love shoes and have a collection. I’d like to take it home and put it in my collection.”

The “Pink Lady” will sit on the corner of Main Street and St George Boulevard for the next 12 months. For more information on Art Around the Corner, click here: http://artaroundthecorner.org/