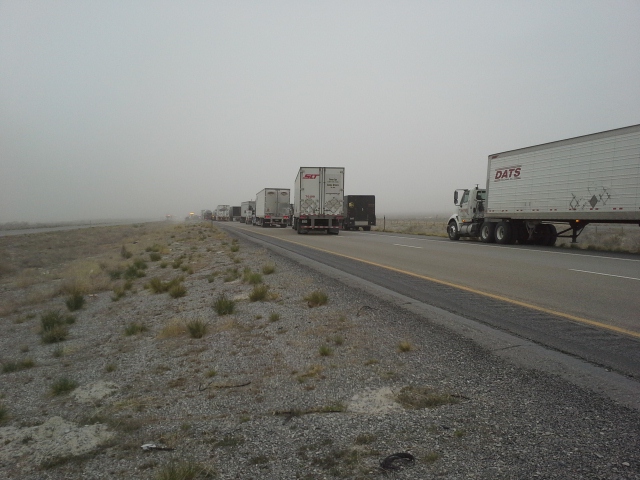 TOOELE COUNTY, Utah -- All lanes have reopened on Interstate 80 after high winds caused a multi-car pileup near the Utah/Nevada border Tuesday.

Wind gusts of 50 mph resulted in overturned semis and a multi-car pileup, killing one person and injuring 25 others.

UHP officials said the crashes started when a semi-trailer encountered low visibility conditions and slowed down almost to a stop.

“Subsequently, other vehicles come up from behind – passenger-type vehicles – and started running in to the slower-moving traffic or the stopped traffic,” a representative for UHP said. “As this thing was unfolding, more vehicles, larger commercial-type vehicles, passenger cars, pickup trucks were coming in and they were all running into each other, unable to see anything, unable to stop.”

UHP officials also said a man in his 50s died in a crash near mile marker 68, and Wednesday officials identified the deceased man as 65-year-old Robert John Eggli of Layton.

Due to the dangerous conditions, the Utah Department of Transportation closed westbound I-80 from milepost 99 in Tooele County to the Utah/Nevada border.

A dozen of those transported to hospitals were taken to Mountain West Medical Center in Tooele County. Officials at the medical center said it was a challenge getting to all those injured people in the middle of severe weather.

"Life flight actually could not fly with the wind today so we had to rely on the ground emergency personnel," said Becky Trigg of the Mountain West Medical Center. "Everything was pretty calm by the time they arrived here and our emergency personnel responded well to make sure they are taken care of."

The video above shows the wreckage of vehicles along the highway. FOX 13 News viewer Jamie Hansen submitted the video. She said in an email her brother was traveling east when he saw the accident in the westbound lanes.

Hansen said she could see cars stuck under the semis.