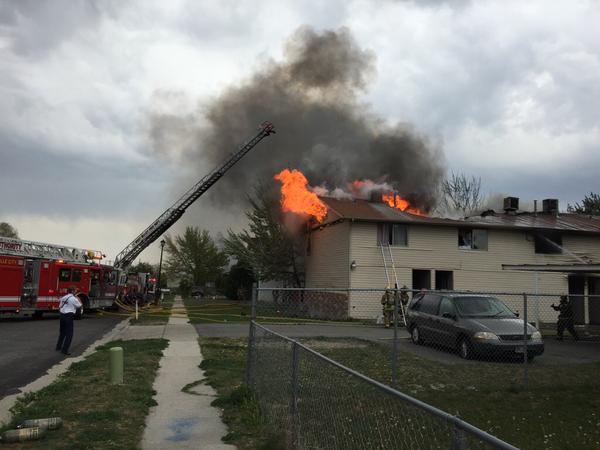 WEST VALLEY CITY, Utah - A fire at an apartment complex in West Valley City left 28 people without a home, Wednesday.

It started in a building at 4500 S. Dean Drive, destroying all four apartments on the property.

"I go to walk down the stairs, and I just feel this heat," said Linda Martinez and her son.

While Martinez was safely evacuated, her husband and grandson were trapped inside a second floor bedroom.

"I thought I was going to die," said Martinez's husband.

He instructed his son, who had come back to help, to jump out of the bedroom window with Martinez's grandson.  The landing left Martinez's husband with some scrapes and bruises, but likely saved his life.

"I was just thinking of my family, my wife," he said.

It is not clear at this point whether the fire was intentional or accidental, according to West Valley City Fire Department.

Initially, one person was taken into custody for questioning about the fire, but they were later released.

The Red Cross setup a shelter at a nearby LDS Stake Ward, where tenants were provided with food and a place to stay.

According to authorities, the cause remains under investigation.

Fire update: investigation into cause continues. Case being examined to determine if charges are appropriate.

Fire update: the person who was in custody for questioning has been released. Not clear at this point whether intentional or accidental.

You can see some of the impact of the windy weather. As soon as flames are out, they kick up again. pic.twitter.com/qZHZZLmCdr

Flames broke through roof of apartment building. Crews attacking fire from above. pic.twitter.com/G7NTeMVJMc

One person jumped from window to escape fire. Person transported to hospital. Fire is suspicious. pic.twitter.com/IKBFtNa3pc