Meagan Grunwald testifies in her own defense in murder trial

PROVO -- Meagan Grunwald took the witness stand to testify in her own defense, finally explaining what happened the day Utah County Sheriff's Sgt. Cory Wride was murdered and Deputy Greg Sherwood was shot.

Grunwald sobbed and whispered as she told the jury about her upbringing in Draper and her relationship with Jose Angel Garcia Jauregui, the man prosecutors say did the shootings. Grunwald is on the hook for aggravated murder and attempted aggravated murder because Utah has no aiding and abetting statutes.

Grunwald said she met Garcia in 2013 when she was 16. She went to a friend to look for help with her homework. Grunwald said she has a learning disability and needed help. Her friend referred her to Garcia, who agreed to help her.

"He was a very nice, respectful man," she told him. "It seemed like everyone liked him."

Grunwald said Garcia lied to her about his age, and revealed in November 2014 that he had gone to prison for "manslaughter." Their relationship deepened when he moved into the Grunwald's home and she told the jury they were "boyfriend and girlfriend."

"I did care for him," she testified.

"Did you love him?" her lawyer, Dean Zabriskie, asked her.

Grunwald testified that she became intimate with Garcia -- but "only on several occasions."

After fights with her father, Garcia moved out but returned around Christmastime, she told the jury. She admitted to lying to her parents about having sexual relations with Garcia -- whom she later found out was 10 years older than she was. She also admitted to trying methamphetamine with him, including the night before the shootings.

She testified that Garcia had given her what she termed a "friendship ring." Prosecutors have called it a "promise ring" and claimed Grunwald wanted to run away to Mexico to be with Garcia.

The relationship began to drift apart around January, Grunwald testified, saying she did care for Garcia "as a friend." After an incident of physical abuse involving her father, Grunwald testified that her parents divorced and she was moving to St. George with her mother.

Garcia was helping them move, she said, but he didn't want her to go. As she was packing, she testified that he marched into her room and said they should go for a drive.

While on the drive, Grunwald described Garcia as "really anxious" and said he got a phone call from his mother on her phone.

"His face just went white. I said, ‘Angel what’s wrong?’ He said they got a warrant out for me. He was really nervous, he was really, really anxious, I guess you could say he didn’t know what he was going to do," she said.

Grunwald told the jury that Garcia suddenly fired two shots out the window.

"I turned around and I pulled over, and I said, 'Angel what are you doing? I’m pretty positvie your not supposed to have that.' I was like, 'Angel you need to get out of my car. I don’t want you in my car anymore.' I put my flashers on because I didn’t want to get hit," she testified.

Grunwald said they argued, and Garcia blamed her uncle for their breakup and her moving out.

"Next thing I know, I hear a tapping on my driver’s window and I look over and it’s a police officer. And I roll down my window and he asks if I’m OK," she cried. "He was like, ‘Are you sure you’re OK?’ and I was like, 'I’m fine.' He was really, really, really nice."

As Grunwald described the encounter with Sgt. Wride, his family sobbed in the courtroom. The officer asked for her ID and registration and returned to his patrol car.

The dash camera recording was played for the jury as Grunwald told her version of events, including threats by Garcia.

"He told me, 'You better make sure that you say you’re OK,'" she said, adding she did not know where the gun was.

"I was like, 'Why didn’t you give him your name?' He was like, there’s a warrant out. I said, 'You can get it taken care of now.' He didn’t respond and rolled his eyes a little bit," she testified.

When Sgt. Wride returned, Garcia said he couldn't remember his birthdate because of a concussion, Grunwald claimed. Wride walked back to his patrol car.

"He was like, 'Step your foot on the f---ing brake.' He reached over and put it in drive. I was like, 'What are you doing?'" she said. "He points the gun at my head and says, 'If you don’t do what I tell you to do, I’m going to kill you and your f---ing family. And that look he gave me, I was looking at the devil."

She said Garcia turned and opened the back window of the pickup.

Grunwald said he fired the shots next to her hear and the cabin filled with smoke.

Grunwald testified they drove around Utah Lake for about an hour while Garcia threatened to kill her and her family, as well as telling her that he loved her. When she asked what he did to Sgt. Wride, Grunwald claimed Garcia told her he "disabled his car."

Her mother called her on the phone during the drive. She said she answered, but Garcia warned her to say she was OK.

"Did you ever consider just jumping out of the truck?" her attorney, Dean Zabriskie asked her.

"Yeah, but I couldn’t find the courage," she said.

In Santaquin, Grunwald said they were followed by a police car. She said she braked to avoid hitting other cars, Garcia fired a couple of shots and screamed at her to keep driving, she told the jury. Prosecutors said Garcia shot Deputy Greg Sherwood in the head (he survived).

Grunwald said she pulled over to a vacant gas station as police cars approached, thinking they would stop and help. They sped by.

"All I see is cop cars passing by and all I was thinking at the time is, am I really invisible? I just risked my life to have everything end," she said. "I kept thinking this was a nightmare I can’t wake up from."

The chase continued on I-15 toward Nephi. Grunwald described having her tires spiked and them abandoning her truck. She said she felt forced to keep following him, with alternate threats and promises of love.

Prosecutors said it was Grunwald who flagged down an SUV to carjack, but she claimed she had no choice.

"I was scared for dear life," she claimed.

Garcia died in a shootout with police. Grunwald claimed she couldn't hear the gunfire, but saw him fall to the ground face-first into the snow, thinking he had shot himself.

Grunwald is expected to finish her testimony on Thursday. She is the last witness for the defense. The jury could begin deliberations as early as Thursday afternoon, following closing statements. 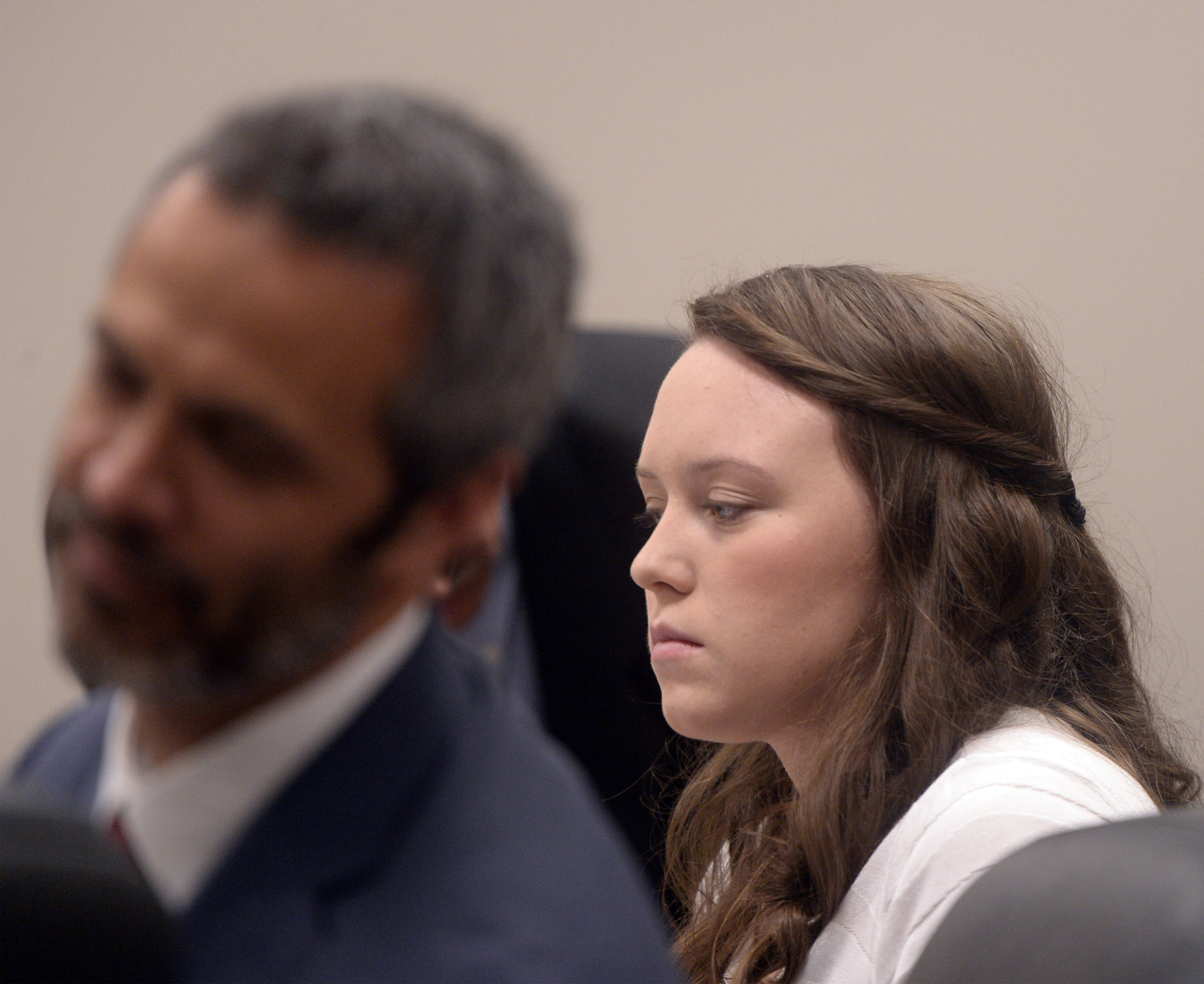