"It ranged anywhere from just flooded yards to flooded basements, flooded garages, and it's always hard to put a figure on the damage until people get in and look at what was damaged and what they're going to have to do to repair their basement and clean it out," said Brandon Thueson, a fire marshal for the Weber Fire District.

Weber County resident Greg Stowe was among those who experienced flooding after an irrigation canal in the area overflowed.

"Well we woke up at 2:30 in the morning, came out and all of this, the water was up to the top of the sandbags," he said.

On Saturday, Weber County received about 2-3 inches of precipitation, according to Brek Bolton, FOX 13 News' meteorologist.

The Stowe family said water made it into the children's bedrooms in the bottom story of their home, and neighbors came to help them remove carpet and dry wall damaged by water.

Officials with Weber county said they have repaired the damage to the canal and will be working with residents in the coming weeks. Thueson said those who live near a flood plain or drainage canal should keep an eye out when storms occur, and if they see clogs or backups they should call their respective public works department. 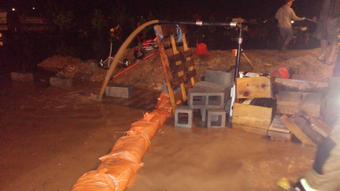