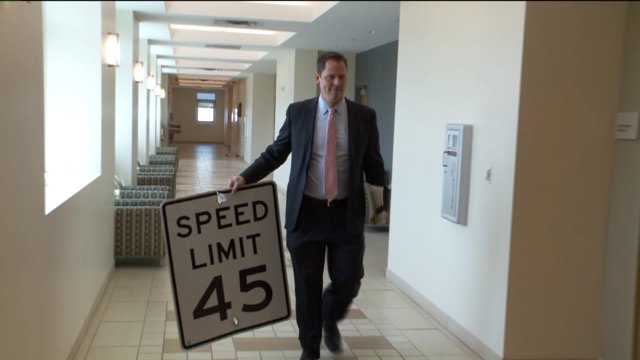 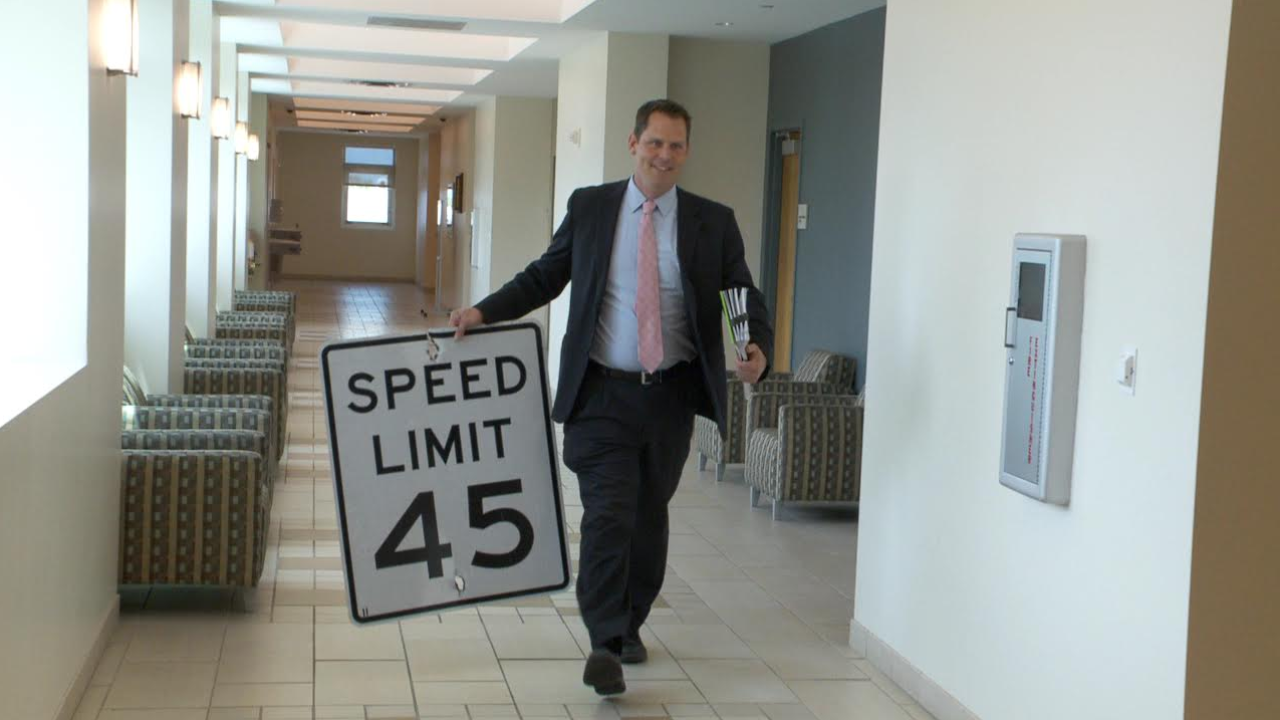 AMERICAN FORK, Utah -- A state lawmaker who was given a speeding ticket, accused of driving 71 miles an hour in a 35 mile per hour zone, went on trial here.

Rep. Jake Anderegg, R-Lehi, acted as his own lawyer at the bench trial in 4th District Court on Friday. He strode into court with a stack of photographs, a cell phone video and a 45 mile per hour sign he fished out of a field.

In an interview with FOX 13, Rep. Anderegg denied driving so fast, calling it "complete bogus."

"First off, the speed limit area was 50 miles an hour, not 35. So he wrote it up wrong," he said, referring to the American Fork police officer who ticketed him.

"It's entrapment," Rep. Anderegg told FOX 13. "It's a way for the city to generate revenue and that's why it needs to be fought."

Questioning the officer who ticketed him, Rep. Anderegg pressed him about the laser radar and whether he was aiming it at cars already in the 35 mile per hour zone -- or pointing it up the street at cars traveling faster. The officer denied it.

The lawmaker made numerous arguments in court, pointing out that a 45 mile per hour speed limit sign had fallen off so drivers may not have been aware the speed was dropping. Rep. Anderegg said he found it in a nearby field -- and UDOT only replaced it last week.

Rep. Anderegg admitted to speeding, but denied going 71 miles per hour. He estimated to be driving 55 miles per hour. On a body camera played during his trial, he admitted to not paying attention and driving "60 to 65." Sgt. Paul testified he told Rep. Anderegg: "All the times I’ve run speed through here, you’re the fastest speed I’ve ever got."

Taking the witness stand in his own defense, Rep. Anderegg said he contacted Utah Dept. of Transportation Executive Director Carlos Braceras about the speed limits in that area and an assistant Utah Attorney General to inquire about the law, but he emphasized to the judge he was "not looking for any special treatment."

Rep. Anderegg insisted that he believed the officer pointed his radar gun into a higher speed area and ticketed him in a lower one. He suggested it may be a frequent practice to generate revenue for the city.

"I will say quite literally he is not being honest with this court in his testimony," Rep. Anderegg said. "I do believe he shot past the 35 mile per hour sign."

After calling a recess to watch the officer's body camera footage again, Judge Christine Johnson came back and convicted him, issuing a $370 fine.

"I don’t think anyone is lying," she said. "I truly believe everyone is telling the truth to the best of their recollection."

Judge Johnson said Rep. Anderegg's admission to speeding and photographic evidence had her siding with prosecutors.

Both the prosecutor and the judge praised Rep. Anderegg in open court for his arguments at trial. He told FOX 13 outside of court his experience in fighting the traffic ticket has prompted him to draft legislation to clarify the law about where police can point their radar guns.

The lawmaker believes he is not alone in being ticketed by police officers who aim into higher speed zones.

"If this was isolated to me, this would be a bill that people would go, 'He's running his own pet bill,'" Rep. Anderegg said. "I know it's not specific to my situation."