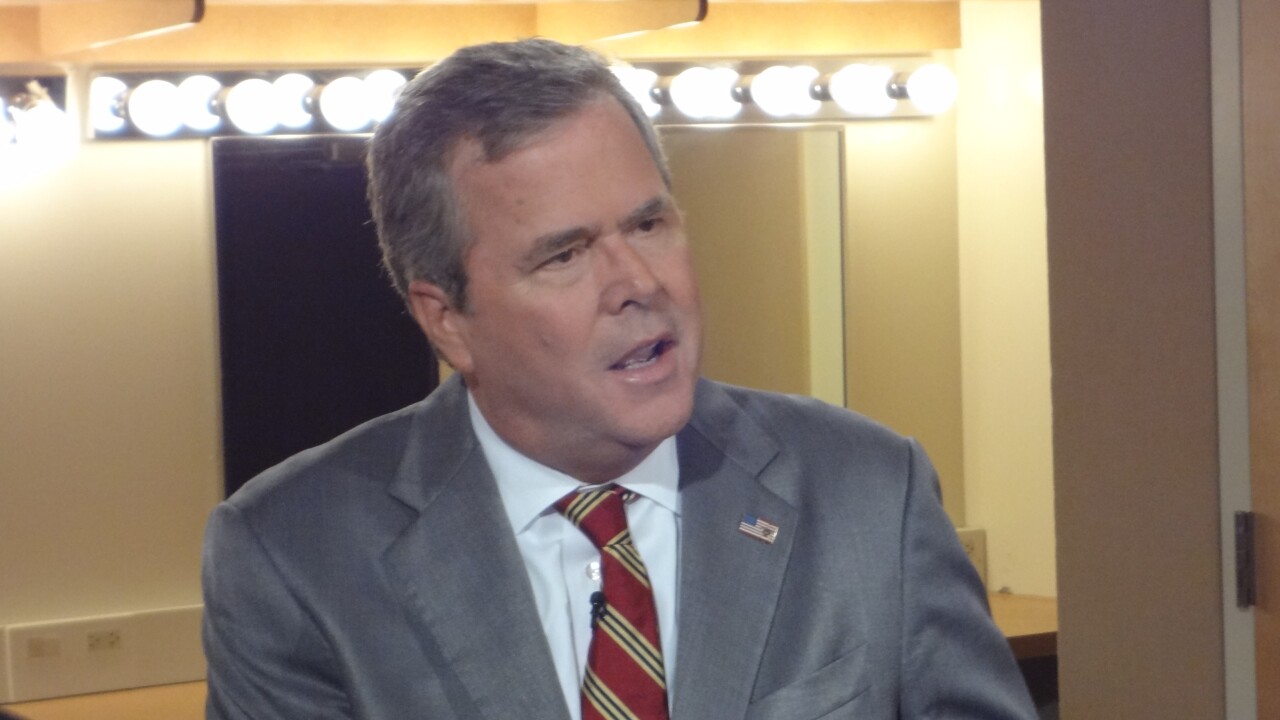 Piers Morgan pre tapes an interview with Jeb Bush for Piers Morgan Tonight at the Republican National Convention in Tampa.

WASHINGTON – Jeb Bush insisted during his unsuccessful first run for the Florida governor’s office that an alternative to welfare for women is to “find a husband.”

The Republican 2016 presidential contender’s comments came in the heat of a 1994 campaign that has come back to haunt him — particularly as he seeks to run an inclusive campaign aimed at broadening the GOP’s appeal.

That year, Bush, with a more strident style and in a different era in the debate over welfare reform, saw a controversial remark he made in July seized on by reporters and by his opponent. Bush said that marriage is one of three options for women to get off welfare assistance.

“If people are mentally and physically able to work, they should be able to do so within a two-year period. They should be able to get their life together and find a husband, find a job, find other alternatives in terms of private charity or a combination of all three,” Bush said.

Bush’s comments were well-publicized at the time, and have occasionally popped up in coverage of his presidential campaign since then. But they’ve taken on new importance in the wake of reports this week of similarly controversial social commentary in a 1995 book.

“From the perspective of children it’s a huge challenge for single moms and it hurts the prospects, it limits the ability of children to live lives with purpose and meaning,” Bush said.

In 1994, when Republican primary opponent Jim Smith hit Bush for those comments in a television commercial, Bush didn’t back away in a September news conference.

“How you get on welfare is by not having a husband in the house — let’s be honest here,” he said.

It was a reference to Aid to Families with Dependent Children, a federal welfare program that was ended in 1996 and replaced by the more restrictive program Temporary Assistance for Needy Families.

Bush’s refusal at the time to back away from his comments were interpreted by Florida media as a signal he expected his stance to assist him in the GOP primary.

A “small percentage” of the program’s support goes to men, the official said, and about 5,000 of the families that received benefits were headed by a male and a female, compared to 250,000 families total collecting benefits.

Bush’s social commentary on marriage from the 1990s has caused his campaign headaches in recent days.

An excerpt from his 1995 book “Profiles in Character” was published in news reports Tuesday. In it, Bush asserted that out-of-wedlock births were caused by single parents no longer being shamed and ridiculed.

“One of the reasons more young women are giving birth out of wedlock and more young men are walking away from their paternal obligations is that there is no longer a stigma attached to this behavior, no reason to feel shame,” he wrote. “Many of these young women and young men look around and see their friends engaged in the same irresponsible conduct. Their parents and neighbors have become ineffective at attaching some sense of ridicule to this behavior. There was a time when neighbors and communities would frown on out-of-wedlock births and when public condemnation was enough of a stimulus for one to be careful.”

In another section, Bush wrote that a lack of a father is a good indication of who will ultimately contribute to “social ills” and have children out of wedlock in the future.

“For young girls, there is a correlate effect of fatherlessness that can be measured by sexual activity and the rate of out-of-wedlock childbearing. Studies have shown that girls who grow up without fathers run a greater risk not only of adolescent childbearing but of divorce as well,” he wrote.