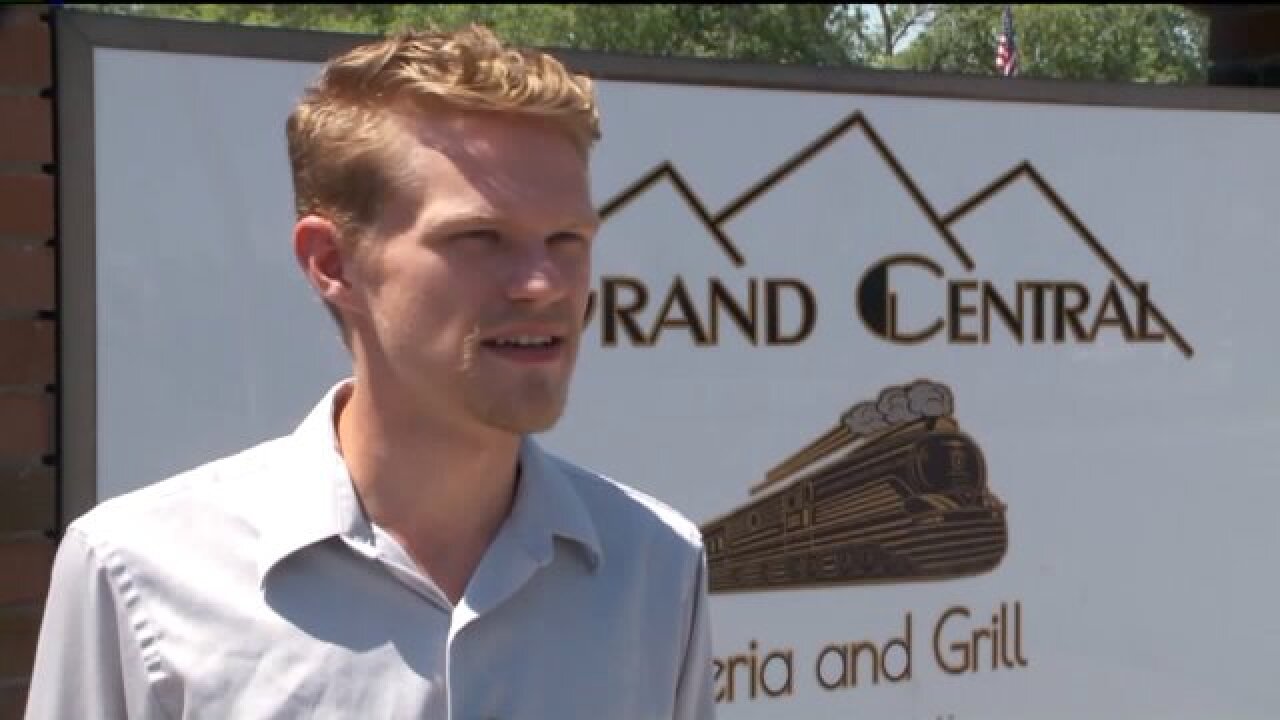 DELTA, Utah -- A man says he was beaten, robbed and sent to the hospital, and his home was also vandalized. Police say it's all part of a series of anti-gay hate crimes.

The victim, Richard Jones, says the hate crimes have been going on for weeks. He said it all started at the family's pizzeria on the night of April 25 when he was closing up shop by himself and took out the garbage.

"I remember coming back into the restaurant and thinking, ‘that's kind of weird--I didn't hear the door close’ and as I turned around I felt someone grab the back of my head and smash it into a wall," he said.

The 21-year-old was knocked unconscious.

"I remember waking up on the floor with someone pinning my chest and legs down, trying to force me to drink a bottle of bleach,” he said. “I then tried kneeing one of the assailants and punched another one in the face, and I don't remember anything else.”

Richard woke up in the hospital the next day. That's when he saw anti-gay messages had been gouged into his skin, "Die F--".

"It was just pure shock at that moment,” he said. “I didn't really know what to say or think, I was just in shock.”

Then, Richard said he was attacked again. He says the suspects came to his home, writing the same message they carved into his arms on his family's garage door.

Days later, he said the suspects came back once more, this time throwing a Molotov cocktail (which is an incendiary device) through his bedroom window.

"That was a scary experience to essentially be attacked in your home because that not only put my life in danger, but my entire family," Jones said.

Terri Jones, the man’s mother, says it's terrifying and heartbreaking to see something like this happen to her son.

"Anybody targets anyone in our family, they target the whole family because we're very close, we're a loving family, we enjoy each other, we do things together, you hurt one person in our family and you hurt every single one of us," she said.

Now, the community and government leaders are allying to show their support, and online a group of people are planning to travel to Delta to support Johnson and his family's restaurant, Grand Central Pizzeria.

Event organizers tell FOX 13 News a group of concerned individuals are working with Q Salt Lake and the club Try-Angles to support the restaurant with an event Saturday where participants will travel to Delta to eat at the restaurant, and an after-party fundraiser will raise funds for the family. Visit the event's Facebook page for more details. The event page states groups will meet at Try-Angles Saturday morning to caravan to Delta.

It also states: "We will also have Grand Central Pizzas at Try-Angles at 5 pm for a pizza and beer fundraiser. QSaltLake will be buying the first $100 of pizza and will be taking donations of at least $5 per slice - money will go to the restaurant and family."

Various government leaders spoke up about the issue.

"I met a remarkable man who is taking this with seriousness and the ability to move on, I'm not sure I would have that kind of strength having endured the kind of physical violence he has," Senator Jim Dabakis said.

“I was horrified and heartbroken to learn of this cowardly and barbaric assault. The Jones family is an upstanding, well-respected and beloved part of the Delta community. Immediately upon learning of the hateful acts, we offered county officials the full-support of the state in finding the perpetrators and bringing them to justice.

“I have reached out to the family and expressed our deepest concern, solidarity and love. This will not stand. I believe that over the coming days we will see an unprecedented outpouring of love and support from every corner of our great state. That is the real Utah.”

Richard says the only choice he and his family has is to keep moving forward.

This is an ongoing investigation that the Millard County Sheriff says is his top priority. They are in the process of interviewing suspects and are asking anyone with information to come forward.

The FBI  and the U.S. Attorney's Office for the State of Utah told FOX 13 on Friday it was aware of the possible hate crime, but the Millard County Sheriff's Office is conducting the investigation.