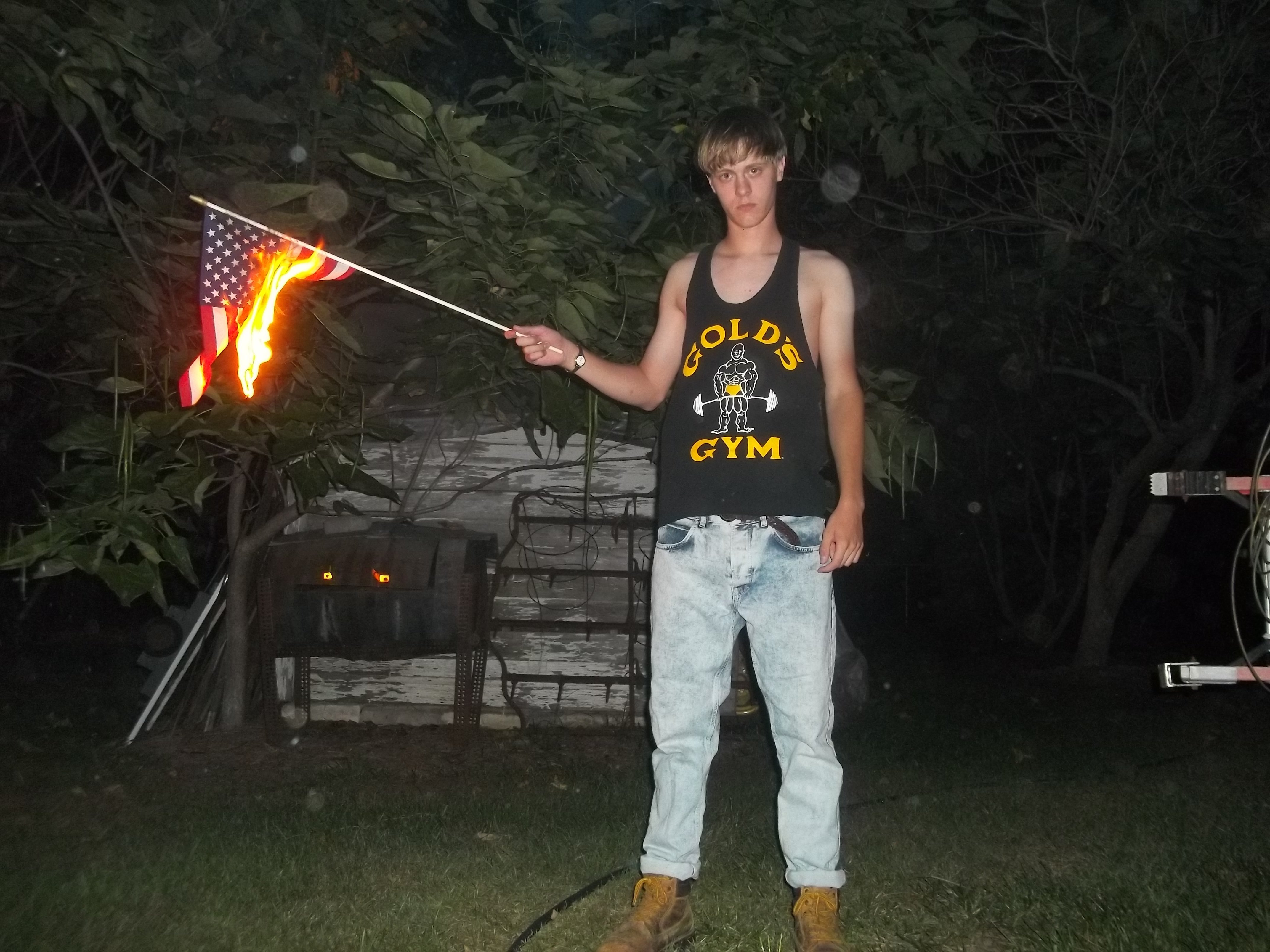 By Ray Sanchez and Ed Payne

(CNN) — Dylan Storm Roof’s website hinted at why he chose “historic” Charleston to shoot nine people to death at Emanuel African Methodist Episcopal Church in South Carolina. Along with a long, hate-filled screed, the 21-year-old included photos of himself burning an American flag, taking aim with a pistol and posing proudly at sites connected to the Confederacy.

The 2012 shooting of Trayvon Martin — the black Florida teen whose shooting death at the hands of George Zimmerman, who was acquitted of murder, provoked huge protests — prompted the writer to research online what he called “black on white crime,” the manifesto said.

“At this moment I realized that something was very wrong,” the manifesto said. “How could the news be blowing up the Trayvon Martin case while hundreds of these black on White murders got ignored?”

Toward the end of the 2,000-word text, under a section titled “An Explanation,” the writer hints at why Charleston was targeted.

“I have no choice,” the text said. “I am not in the position to, alone, go into the ghetto and fight. I chose Charleston because it is most historic city in my state, and at one time had the highest ratio of blacks to Whites in the country. We have no skinheads, no real KKK, no one doing anything but talking on the internet. Well someone has to have the bravery to take it to the real world, and I guess that has to be me.”

The website is called “The Last Rhodesian.” In an image tweeted by South Carolina authorities this week, Roof is seen wearing a jacket with the flags of apartheid-era South Africa and nearby Rhodesia, a former British colony that a white minority ruled until it became independent in 1980 and its name was changed to Zimbabwe.

Images on the website include a .45-caliber Glock pistol; Roof taking aim with the gun, and posing in front of a sign that says, “Sacred burial site. Our African ancestors” as well as outside South Carolina’s Museum and Library of Confederate History; and Roof standing on and burning an American flag.

The contents of the website appear to back up what friends have said about the young man who Saturday sat in his jail cell under suicide watch.

A drunken Roof boasted one night about an unspecified six-month plan “to do something crazy,” his friend Joey Meek told CNN on Friday.

The young man typically kept to himself but a liter of vodka that night seemed to fuel talk about the return of segregation and vague plans “to start a race war,” Meek recalled.

“He wanted it to be white with white, and black with black,” Meek said. “He had it in his mind, and he didn’t really let nobody know (what he was going to do).”

Meek hid Roof’s gun that night but put it back the next day, he said. “I didn’t take him serious.”

Meek didn’t take his claims to authorities before Thursday morning, the day after nine people were killed at Emanuel African Methodist Episcopal Church.

“Dylann wasn’t a serious person; no one took him serious,” Meek said. “But if someone had taken him serious, this all would all have been avoided.”

Roof has been charged with nine counts of murder and possession of a firearm during the commission of a violent crime.

On Friday, Roof was expressionless, almost solemn, as he appeared via video before Magistrate James Gosnell Jr., who opened a bond hearing by saying that there were victims on the young man’s side of the family as well. The judge set a $1 million bond on the possession of a firearm count but no bond on the murder charges.

He showed no emotion as family members of his victims addressed the court and Roof, expressing both anger and forgiveness.

“I will never be able to hold her again, but I forgive you,” a daughter of Ethel Lance said. “And have mercy on your soul. You hurt me. You hurt a lot of people, but God forgives you, and I forgive you.”

Felecia Sanders, mother of victim Tywanza Sanders, said that “every fiber in my body hurts, and I will never be the same.”

“As we said in the Bible study, we enjoyed you,” she said of Roof’s time at the church before the massacre. “But may God have mercy on you.”

Police caught Roof in Shelby, North Carolina, about 245 miles away from the carnage in Charleston.

He confessed to the shootings in interviews with the Charleston police and FBI, two law enforcement officials told Evan Perez and Wesley Bruer of CNN, the first network to report this development. He also told investigators he wanted to start a race war, one of those officials said.

Police are investigating the shooting as a hate crime.

The wedding of Roof’s sister, planned for this weekend, has been postponed, according to the Rev. Tony Metze, pastor of St. Paul’s Lutheran Church in Columbia, South Carolina.

Metze said he met with Roof’s immediate family on Friday.

“What they’ve asked and what I ask is that we continue to hold all these families in our prayers,” Metze told CNN. “And that the whole world, our nation, Charleston, our community understand that we love them. God loves them.”

John Mullins, who attended White Knoll High School with Roof, told CNN that the suspect was “kind of wild” but not violent.

“That’s why all this is such a shock,” Mullins said.

The classmate recalled Roof occasionally making racist comments, though he appeared to have black friends at the same time.

“They were just racist slurs in a sense,” he said. “He would say it just as a joke. … I never took it seriously, but now that he shed his other side, so maybe they should have been taken more seriously.”

Roof repeated the ninth grade at the Lexington County high school, said Mary Beth Hill of the Lexington School District, west of Columbia. She said he was “very transient,” that he “came and went.”

In a Washington Post interview, Roof’s uncle, Carson Cowles, said his mother “never raised him to be like this.”

“The whole world is going to be looking at his family who raised this monster,” Cowles told the Post. “I’d be the executioner myself if they would allow it.”

Roof spent about an hour at the historic African-American church before the massacre, attending the prayer meeting with his eventual victims, Charleston police Chief Greg Mullen said.

Witnesses told investigators the gunman stood up and said he was there “to shoot black people,” a law enforcement official said.

He answered one man’s plea to stop by shooting him, said Sylvia Johnson, a cousin of the church’s slain pastor who has talked to a survivor.

“‘No, you’ve raped our women, and you are taking over the country,” he said, according to Johnson. “… I have to do what I have to do.”

All the victims were shot multiple times, according to Roof’s arrest warrant.

“Prior to leaving the bible study room he stood over a witness … and uttered a racially inflammatory statement,” the warrant said.

The months leading up to the shooting were a mix of troubling and odd.

Police in his hometown of Columbia — about 120 miles northwest of Charleston — obtained a warrant for his arrest in early March. He had been picked up on drug charges a few days earlier at Columbiana Centre mall, according to a police report.

Workers at two stores told mall security that Roof was acting strangely, asking “out of the ordinary questions,” the police report said.

Roof initially said he wasn’t carrying anything illegal. But he agreed to be searched, and an officer found “a small unlabeled white bottle containing multiple orange … square strips” in his jacket, the police report said.

They turned out to be Suboxone, which is used to treat opiate addiction, according to the police report. Roof said he got the strips from a friend.

He was arrested on a drug possession charge that day in late February, but it’s unclear why the March 1 arrest warrant was issued.

On April 26, police were again called to Columbiana Centre because Roof, who had been banned from the mall for a year after his drug arrest, had returned, the police report said. The ban was extended to three years after his second arrest. His drug case was pending.

Roof turned 21 in April, and a short time later he had a gun.

On Thursday, investigators did a trace of the handgun used in Wednesday’s shooting and determined that it was a .45-caliber handgun Roof purchased from a Charleston gun store in April, two law enforcement officials told CNN’s Perez and Bruer.

Roof purchased a Glock .45-caliber model 41, which holds 13 rounds, a federal law enforcement source with knowledge of the investigation said. Witnesses have reported that Roof reloaded a number of times.

Roof’s father and uncle contacted police after surveillance camera images of the suspect were made public, according to the arrest warrant. His father told authorities his son owned a .45-caliber handgun.

Joe Roof, his grandfather, said Roof was given “birthday money” and that the family didn’t know what he did with it.