DRAPER, Utah -- An inmate at the Utah State Prison believes two prison escapees from a maximum security prison in Clinton, New York will soon be captured.

Lyndal Dale Ritterbush has experience with escapees. After all, he was one for more than 22 years after escaping from the Utah State Prison in 1985.

Dale, who was convicted of sex crimes, said he was the target of harassment and at least one beating in which he lost consciousness and later woke up in a pool of his own blood.

He said prison guards turned a blind eye to the abuse, which intensified after Dale refused to participate in a scheme devised by other inmates to smuggle drugs into the system.

On a cool April evening after being called outside of the Prison gates to fix a tractor on what was then the prison farm, Dale said he blacked out, and when he came to he was somewhere on Traverse Ridge looking down at the prison, wondering what had happened. He was in the company of another inmate who told him they'd walked through the night.

Dale said after a day of sitting in the shade of sagebrush weighing his options, he decided not to turn himself in, and started walking north.

The other inmate tagged along for several days, but the two eventually separated somewhere in Wyoming, and Dale's former companion was soon back in police custody.

Dale's run would be much, much longer.

He claims to have lived like a mountain man in the Montana wilderness for a span of roughly two years, inhabiting a cave, and seldom making contact with civilization. He says he once fell, and a willow branch went through his shoulder and he treated himself for the injury.

As questionable as these claims may be, what's certain is that Dale successfully remained on the lam for more than 22 years.

Before the 1980s were over, he'd met and married a waitress named Terri in Missoula, Montana, they'd moved to Oregon, and led a relatively quiet life working in real estate management and raising children.

In 2007, the name Dale had been living under for several years, Robert Rhoden, was flagged by the DMV as a name possibly used for identity theft. A subsequent investigation led to Dale's capture and return to the Utah State Prison.

After what Dale describes as a disappointing hearing before the Utah Board of Pardons in 2012 in which he was told he'd likely die in prison, he says he encouraged Terri to move on with her life, and she has.

He still holds out hope he might someday be released, and allowed to return to Ong, Nebraska, a town he says is "made up of 65 wonderful people, most of them family."

Among those who live in Ong, is his brother-in-law, the real Robert Rhoden.

The photo gallery below shows a 12-page letter written by Ritterbush that details his his life in prison in 1985, his escape and capture. 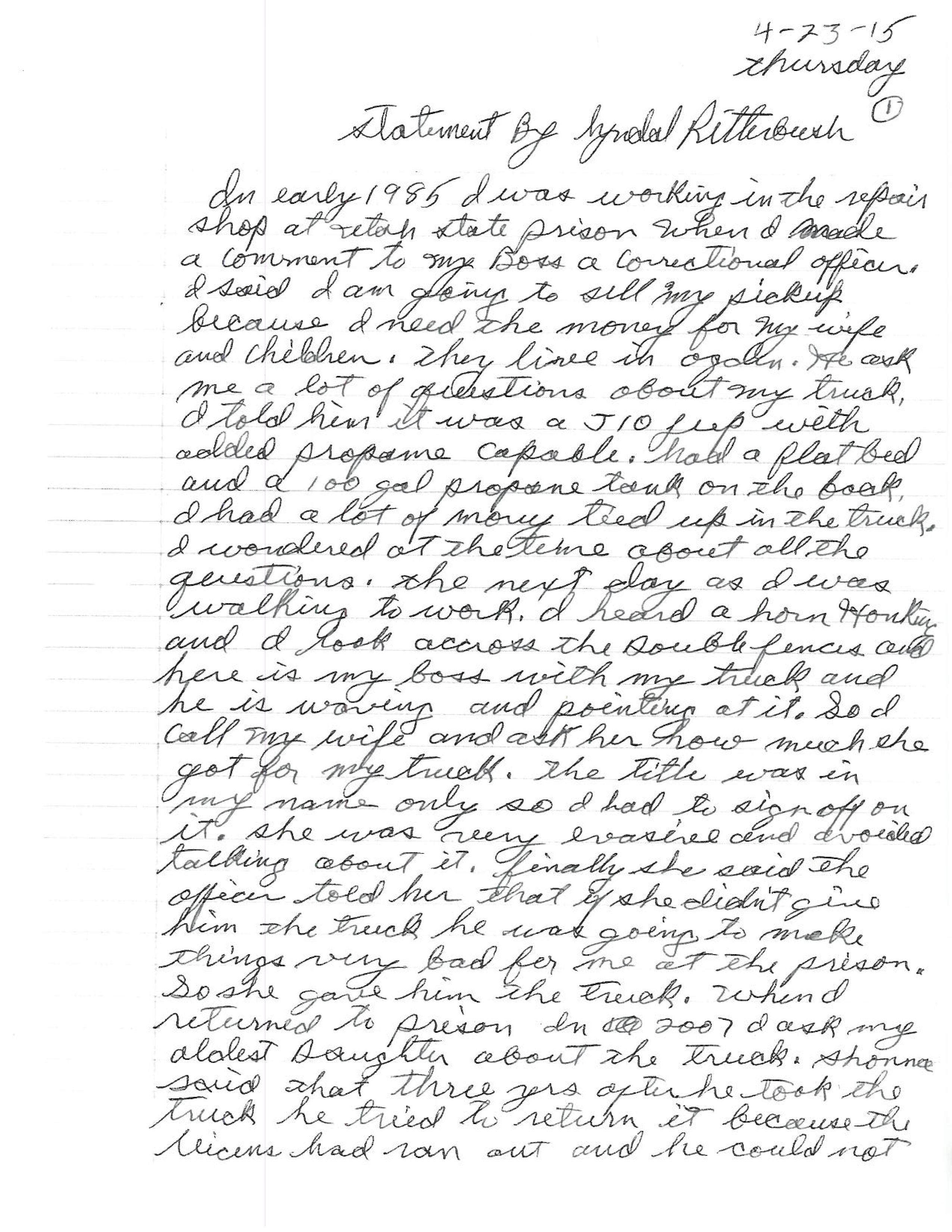