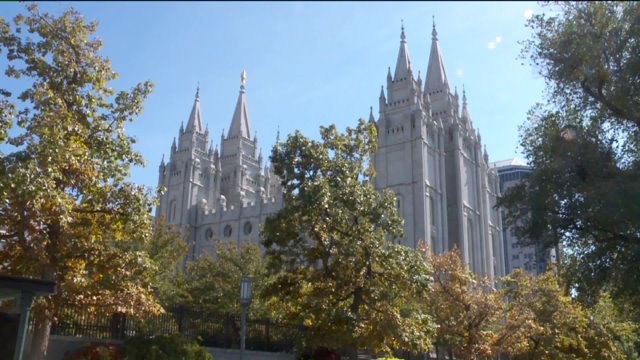 SALT LAKE CITY, Utah - After the U.S. Supreme Court’s ruling to legalize same-sex marriage, The Church of Jesus Christ of Latter-day Saints came out with a letter reiterating its stance opposing same-sex marriage. Some leaders read the letter to members during church services Sunday.

Many LDS Church members said they support the church’s stance on gay marriage, and they said the prepared letter helped them better understand how to move forward after the Supreme Court's decision.

“It states that we believe marriage is between a man and a woman, and that it’s a sacred union,” said LDS Church member Curt Clapier.

After supporting anti-discrimination laws protecting LGBT individuals for fair treatment in housing, employment and medical care, the letter reminds members that gay marriages of any kind will not be officiated in LDS Church meetinghouses or on LDS property. That includes, “receptions, ceremonies or any other activities associated with same-sex marriage,” according to the letter.

“I think it’s important to have solidarity within any organization, so the fact that the church is consistent in its belief and stance is important," said Bryce Car, another member of the LDS Church.

The letter reads in part: “Marriage between a man and a woman was instituted by God and is central to His plan for His children and for the well‐being of society." And, "changes in the civil law do not change the moral law that God has established." And, “homosexual behavior violates the commandments of God, is contrary to the purposes of human sexuality, and deprives people of the blessings that can be found in family life and in the saving ordinances of the gospel."

Church leaders also maintain their members should show tolerance and respect toward those with different beliefs but, to do so without condoning behavior that is contrary to LDS Church teachings.

“We still hold the stance that marriage is between a man and a woman, but that everyone should have the same rights. And so, I loved that they pointed that out," said LDS Church member Susannah Scheuermann.

The LDS Church recently made a donation to the Utah Pride Center to help LGBT homeless youth. In a grant letter, the LDS Church wrote: “We are grateful to be able to serve your efforts in this worthy project and appreciate the work that you and others are doing related to this initiative.”

FOX 13 News' attempts to reach out to Equality Utah and the Utah Pride Center for comment on this issue were unsuccessful. To read the full letter from the LDS Church regarding same-sex marriage, click here.